Kalpana Rashiwalakalpana@sph.com.sg@KalpanaBT
The Urban Redevelopment Authority's rental index of office space in the central region rose 1.6 per cent in the second quarter of this year over the prevous three months.
PHOTO: ST FILE

OFFICE rents in the central region of Singapore rose 1.6 per cent in the second quarter of this year over the previous three months, property data from the Urban Redevelopment Authority (URA) on Friday showed.

This is a smaller gain compared with the 2.6 per cent increase in the previous quarter and also marks the fourth consecutive quarter-on-quarter rise in the index since it last bottomed in the second quarter of last year. The index is up 9.4 per cent from that trough.

On the other hand, prices of office space in the central region increased by 1.9 per cent in second quarter, a faster clip than the 1.3 per cent increase in the previous quarter.

"Besides the two whole-building deals involving MYP Plaza in Cecil Street and Twenty Anson which were transacted at almost S$3,000 per square foot and S$2,503 psf  of net lettable area, respectively, record unit prices were set during Q2 2018 in at least three strata-titled office buildings in the CBD - The Octagon, Springleaf Tower and Samsung Hub,"  said Tay Huey Ying, head of research and consultancy, Singapore, at  JLL.

"Investors’ optimism has been underpinned by the strong market fundamentals of steady demand and limited new supply which should support the continued growth in office rents into the medium term. Occupiers across a broad range of industries have been active in seeking space for expansion as they scale up on the back of the robust economic growth," she added.

As at the end of the second quarter of 2018, there was a total supply of about 725,000 square metres gross floor area (GFA) of office space in the pipeline, compared with the 791,000 sq m GFA in the previous quarter.

Cushman & Wakefield senior director of research, Christine Li,  noted that net demand islandwide for the first half of this year totalled 88,000 sq m - exceeding the 60,000 sq m for the whole of 2017.

"We expect vacancy to continue tightening as the supply pipeline remains muted over the rest of 2018 and 2019, and hence advise occupiers to conduct early portfolio planning and bring forward impending lease reviews."

CBRE's head of research for Singapore and South-East Asia, Desmond Sim, noted that the medium-term office rental outlook remains positive especially for the Grade A segment."Potential risks remain, particularly on the demand side, in light of recent escalations in trade disputes and the possible dampening effects on global economic growth. Both landlords and occupiers will need careful navigation through the next six to 12 months as the actual strength of the market is tested. 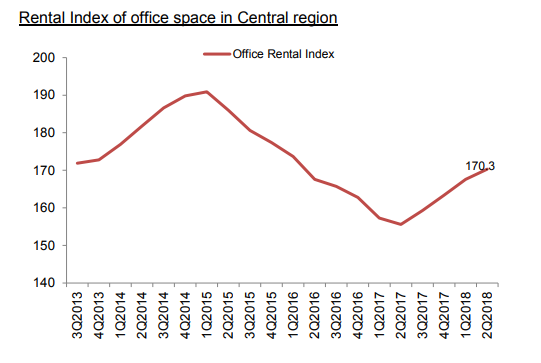 THE Workplace Safety and Health (WSH) Council and the Singapore Contractors Association Ltd (SCAL) are urgently...

US: Wall St gains on recovery hopes after Thanksgiving holiday