THE government is reducing the supply of private residential units on its confirmed list for the second-half 2019 Government Land Sales (GLS) Programme, the Ministry of National Development (MND) said on Thursday morning.

There are also around 24,000 existing private housing units which are vacant, MND added.

In contrast, demand has "continued to fall" since the July 2018 property market cooling measures, MND said. Overall transaction volume also declined for the third straight quarter in the first quarter of 2019, while developers’ demand for land has also moderated.

The private housing supply works out to be 0.7 per cent lower than the 6,475 private residential units (including 910 EC units) in the confirmed and reserve lists of the current H1 slate. 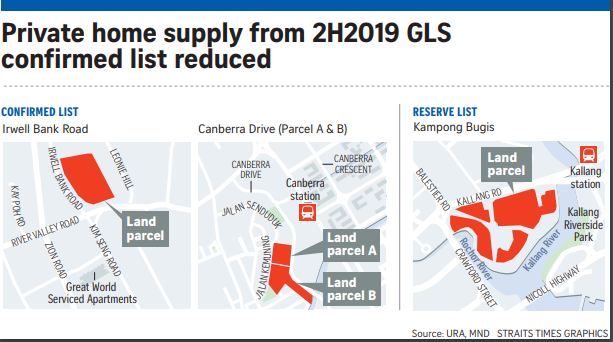 Residential sites under the confirmed list are located at Bartley Road/Jalan Bunga Rampai, Irwell Bank Road, two parcels at Canberra Drive, and Fernvale Lane which is an EC.

On MND’s reserved list are four private residential sites (including one EC site), three white sites and one hotel site.

These yield about 4,715 private residential units (including 595 EC units and an estimated 1,000 units from the first phase of the Kampong Bugis site), 92,000 sq m GFA of commercial space and 1,100 hotel rooms.

The Marina View white site was carried over from the H1 2019 GLS Programme, while plans for the Kampong Bugis white site were first mentioned in a 2017 exhibition seeking feedback from the community.

The new hotel site at River Valley Road under the reserve list will be integrated with the Fort Canning MRT station.

Reserve-list sites are launched only upon successful application by a developer or when there is sufficient market interest in a site. Confirmed list sites, meanwhile, are launched according to schedule regardless of demand.

CBRE South-east Asia head of research Desmond Sim said the H2 2019 GLS programme reflects the state planners’ prudence towards the market, with demand being calibrated with "unsurprisingly" more sites on the reserve list than the confirmed list.

"The reserve list will remain the best indicator of land appetite, while the confirmed list will ensure a steady source of residential land supply in the market," Mr Sim said.

He added that state planners appear to favour mixed-use sites with some zoning flexibility as it allows greater coverage across all zones and time span.

Leong Boon Hoe, List Sotheby’s International Realty (List SIR) chief operating officer, said the reduction in the confirmed sites shows that the government is aware of the slowdown in the residential market.

Among the five residential sites offered, Mr Leong said the Irwell Bank Road site looks the most attractive with respect to its location attributes. List SIR also expects bidders of Irwell Bank Road to be more circumspect in their bids.

Everton Road shophouse up for sale with S$7.5m guide price

Australia: Shares rise most in over two months on rate-cut bets

[BENGALURU] Australian shares climbed on Wednesday by their most in more than two months as expectations grew that...

[NEW DELHI] India's potential plan to compel companies to do a secondary listing on an Indian stock exchange if they...

[JAKARTA] Indonesia has started developing a food estate to grow rice, corn and other crops that should eventually...

[SINGAPORE] Gold could hit a record before the year end, aided in part by the risks surrounding the US presidential...

[SHANGHAI] China's yuan weakened against the US dollar on Wednesday as renewed global concern about a new wave of...