APARTMENT and condo prices in Singapore rose by 1.3 per cent in the second quarter of 2019 - catching market watchers by surprise.

The rise erases the declines that had set in after Q3 last year.

Based on the Urban Redevelopment Authority's (URA) flash estimate on Monday, the private property price index for Q2 would be the highest since the first quarter of 2014.

Several analysts believe Q2's price rise to be a blip. They say the factors behind the uptick may not necessarily point to a resurgent market, thus putting to rest fears that it could trigger further cooling measures.

For the quarter just ended, price gains were led by the prime and city-fringe districts.

Prices of non-landed private residential properties rose by 1.5 per cent in the Core Central Region (CCR); in Q1, they fell 3 per cent.

In the Rest of Central Region (RCR), prices rose by 3 per cent after having registered a decline of 0.7 per cent in the previous quarter.

Prices in the Outside Central Region (OCR) went up 0.5 per cent, following the preceding quarter's 0.2 per cent increase.

Barclays regional economist Brian Tan said in a research note: "We doubt the government will sit on its hands if property prices continue to rebound despite the cooling measures, especially when GDP growth is under greater pressure now than last year."

Monetary Authority of Singapore (MAS) Managing Director Ravi Menon said last week that the cooling measures of July 2018 were intended to curb the "real possibility that property price increases would again run ahead of economic fundamentals". 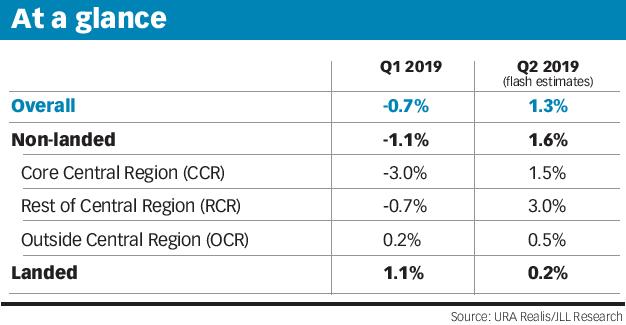 Some argue that prices won't continue a strong uptrend from here. CBRE's head of research at South-east Asia Desmond Sim called the price increase in Q2 an anomaly, given the rising unsold inventory to come from more launches and the downward revision of economic forecasts.

Colliers International's head of research for Singapore Tricia Song said: "One swallow does not a summer make and one quarter of price growth does not necessarily indicate an uptrend henceforth. We think developers will remain prudent in their pricing strategy, eschewing any sudden sharp increase in prices - particularly for projects that are moving slowly."

Savills' head of research and consultancy Alan Cheong said that prices have been rising because of high land costs that developers bid for in the last land acquisition cycle.

He added: "They are translating that high land cost to selling land prices. It's purely because of the high break-even, not because developers are profiteering."

Based on JLL's analysis of caveat data, transactions in the city-fringe of non-landed homes with prices exceeding S$2,300 psf made up a fifth (20.4 per cent) of all non-landed homes in this market segment in Q2, compared to only 1.2 per cent in the first quarter.

JLL's senior director for research and consultancy Ong Teck Hui said certain projects may have been attractive and generated demand ... It doesn't signal recovery in the pipeline."

"In spite of whatever the market is going through, people still see long-term value in investing", he said.

Government data released last month showed that home loans had shrunk for the fifth straight month in May.

Christine Li, senior director and head of research for South-east Asia, said one reason could be the lower volume of resale transactions in Q2.

On a year-on-year basis, the price index based on the flash estimate would have increased just 1.1 per cent, compared to the year-on-year gain of 3.1 per cent in Q1 2019.

CIMB economist Song Seng Wun said: "Where there may be some volatility quarter-on-quarter, the underlying trend of the market is ... consistent with underlying economic growth."

The flash estimates were compiled based on prices given in contracts submitted for stamp-duty payment and data on units sold by developers up till mid-June. They will be updated on July 26.