Rents for both non-landed private homes and Housing Board flats rose in December last year from the year before, even as the number of rented condominium and private apartment units, and HDB homes, rose for the whole of 2019.
ST PHOTO: KUA CHEE SIONG

[SINGAPORE] Rents for both non-landed private homes and Housing Board flats rose in December last year from the year before, even as the number of rented condominium and private apartment units, and HDB homes, rose for the whole of 2019.

F lash data from real estate portal SRX Property on Wednesday showed that overall condominium and private apartment rents rose 3.7 per cent in December 2019 from a year ago, although rents last month decreased 0.9 per cent from November.

For non-landed private home rental transactions, there were 58,236 homes leased for the whole of 2019, 2.3 per cent more than a year ago.

In December alone, 1.2 per cent more private non-landed units were rented than the year before.

But month on month, rental volumes fell, with 4,011 private non-landed units leased in December, a 2.8 per cent drop from 4,126 homes in November. Even so, last month's rental volume was 13.6 per cent per cent higher than the five-year average volume for the month of December, SRX data showed.

Over in the public housing market, HDB rents in December last year increased 1.3 per cent from a year ago. December's rents also inched up by 0.1 per cent from November.

However, compared to the peak in August 2013, December's HDB rents are still down by 14.3 per cent.

SRX data showed that while three-room flat rents fell 0.3 per cent in December compared with the year before, rents in other flat types rose: four-room flat rents rose by 2.1 per cent, rents for five-room units rose 1.3 per cent, and that for executive condominium flats rose 1.4 per cent.

These price changes come on the back of more flats rented, as the number of HDB flats leased for the whole of last year hit 23,958, 1.9 per cent higher than 2018.

There was also a month-on-month fall in rental volumes, with 1,753 HDB flats rented in December, 8.6 per cent lower than the 1,917 units rented in November.

The rental volume in December was 2.4 per cent lower than the five-year average volume for the month. 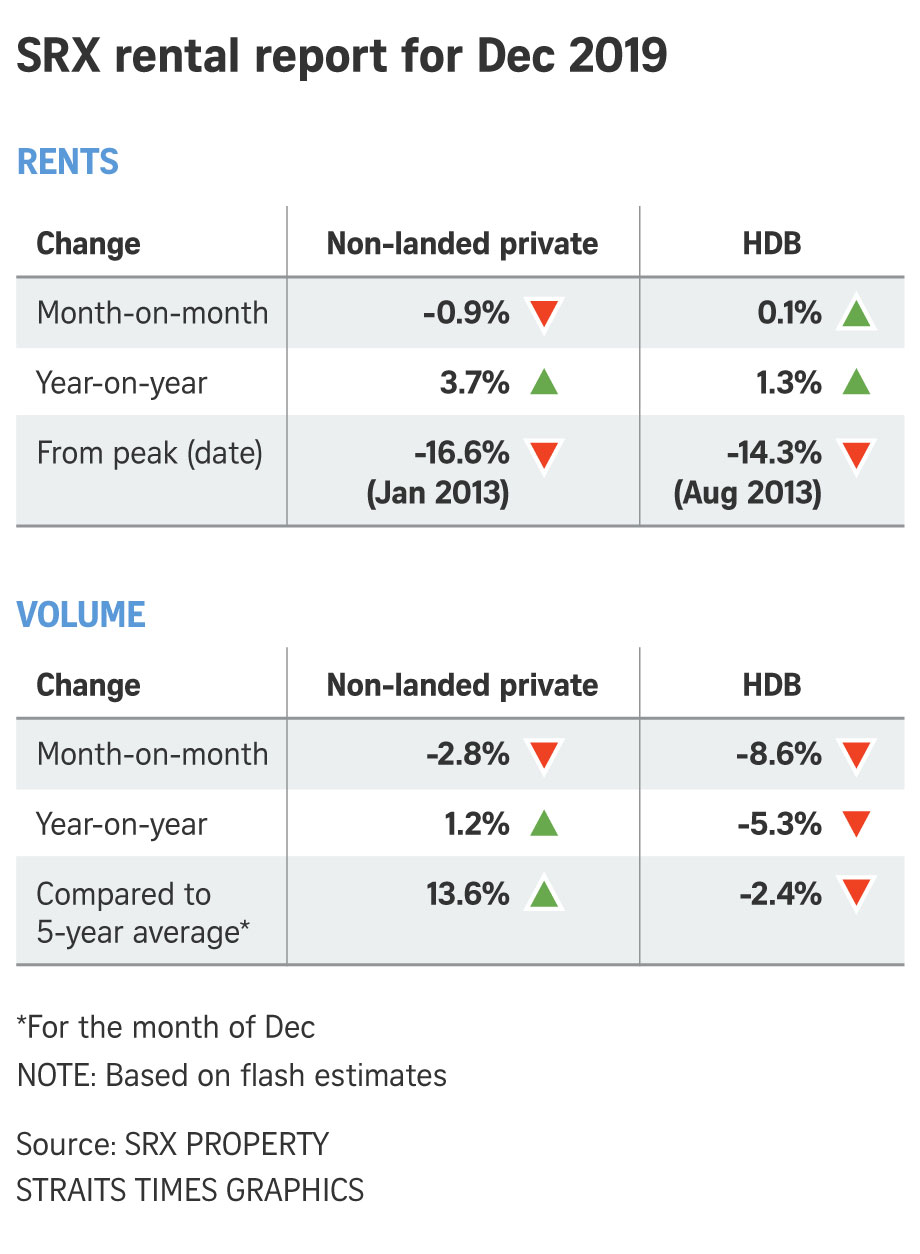 Mr Nicholas Mak, head of research and consultancy at ERA Realty, said the lower rental volumes in December compared with November was typical of "the seasonal year-end lull period".

"(This) softened the rental transaction volumes marginally for both the private residential and HDB leasing markets last month as some decision makers were away for the holidays," he said.

He said the number of units leased for both non-landed private units and HDB flats could rise between 1.5 per cent and 2.5 per cent by this December, if "the employment market remains healthy".

Around 24,500 HDB flats will reach the five-year minimum occupation period this year, while around 5,100 private residential units will be completed. "Some of these new housing units will be offered for lease," Mr Mak said.

[SEOUL] North Korea will ban foreign tourists to protect itself against a new Sars-like virus that has claimed at...

SINGAPORE-BASED Barramundi Asia, which operates the largest barramundi farms in Singapore and Australia, is...

INSTEAD of a wish list or a focus on tax tweaks for Budget 2020, KPMG in Singapore has proposed that economic...

Under Armour looking for a second wind after difficult 2019

[BALTIMORE] Huge Under Armour billboards dot the streets of Baltimore, with photos of famous athletes sponsored by...