Vivienne Tayvtay@sph.com.sg@VivienneTayBT
The rental market for Singapore's non-landed private properties dipped 0.2 per cent in June from May, while HDB rentals prices inched up 0.4 per cent.
PHOTO: ST FILE

RENTS for non-landed private properties continued to soften for the second straight month while they edged up again for HDB flats, according to flash data from real estate portal SRX Property.

Condominium and private apartment rents dipped 0.2 per cent in June from May, after inching down by the same rate in May.

Compared to their peak in January 2013, private rents in June were down 17.5 per cent.

Condo and HDB rents, volumes up in February: SRX 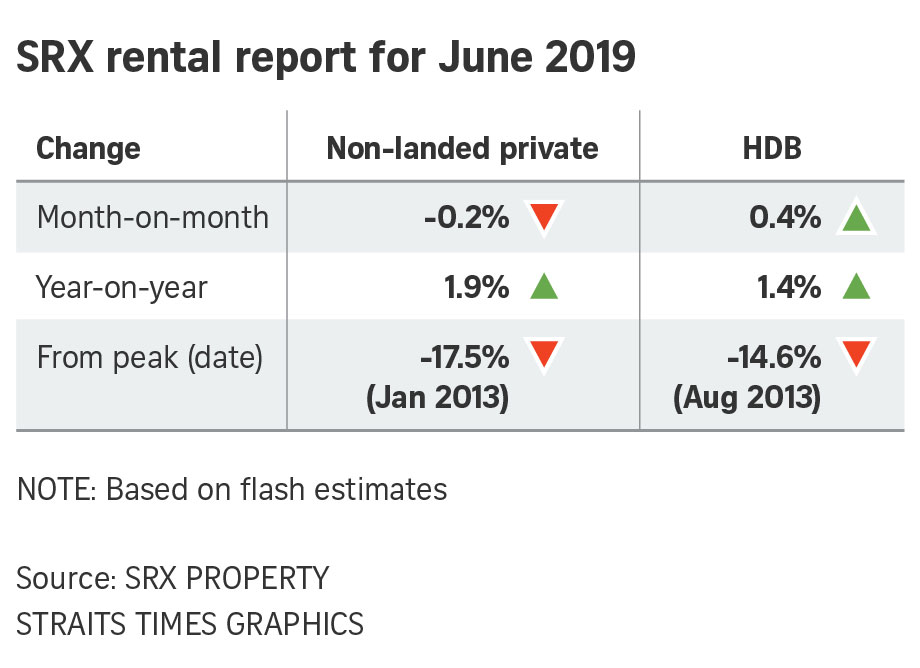 The number of condos and private apartments leased fell 4.2 per cent month on month and 6.4 per cent year on year to 4,704 units in June.

This is "within expectation" as it is currently the season where more expats renew or sign new contracts in the second and third quarters of the year, said Christine Sun, OrangeTee & Tie head of research and consultancy.

Ms Sun added that the current political and social unrest in Hong Kong might “destablise” the country’s reputation as a stable financial hub, which might lead to investors worrying about the financial and economic risks of operating businesses there.

"They may consider shifting their operations or headquarters to Singapore in the longer term, which will benefit the rental market here," she added.

Month-on-month HDB rental volume decreased 3.1 per cent with 1,878 HDB flats rented out, down from 1,938 units in May. But compared to a year ago, the number of HDB flats leased was up by 1.2 per cent.

Ms Sun said some downward pressure on HDB rents is expected in the coming months due to an increasing supply of rental flats as more flats reach their five-year minimum occupation period, hence being eligible for leasing.

Loyang industrial site up for sale at S$8.8m guide price

FACED with a certain recession in 2020, the Monetary Authority of Singapore (MAS) eased the Republic’s exchange rate...

[LONDON] British airline easyJet on Monday said it had grounded its entire fleet because of the novel coronavirus...