SINGAPORE resale condominium and apartment prices remain unchanged for the month of August, while volume of sales fell, according to monthly figures from real estate portal SRX Property released on Tuesday.

Overall condo resale prices remained unchanged in August from the previous month. July had seen a 0.5 per cent decline from June, which also saw a drop.

Sales volume fell by 13.6 per cent with 751 units transacted in August, compared with 869 units resold in July.

This could be attributed to a “double whammy” of growing economic uncertainties as well as the Chinese Hungry Ghost month in August, said OrangeTee & Tie’s head of research and consultancy Christine Sun.

That being said, sales volume was 4.3 per cent higher than in August 2018 and above the 12-month average of 702 units from August 2018 to July 2019, she noted. Taking a longer-term view, they are 1.7 per cent lower than the five-year average volume for August, SRX data showed.

The most expensive condo resold in August was Le Nouvel Ardmore, where a unit was sold for S$15.7 million at S$4,000 price per square foot.

Ms Sun added that resale home prices in CCR and RCR have "risen in tandem" with higher launch prices of new projects in these market segments. The new launches' higher prices could be due to their freehold status, better quality finishing, as well as being situated in choice locations. "Some projects were also acquired at higher land costs during the last collective sales cycle," she added.

Overall transaction over X-value (TOX) was found to be negative S$10,000 in August, an improvement from negative S$11,000 in July. TOX measures how much a buyer is overpaying (positive value) or underpaying (negative value) for a property based on SRX’s computer-generated market value. The data only includes districts with more than 10 resale transactions.

On the other hand, the area with the lowest median TOX was District 10’s Tanglin, Holland and Bukit Timah which posted a negative S$91,000 value, followed by District 8’s Farrer Park and Serangoon Road at negative S$49,000. 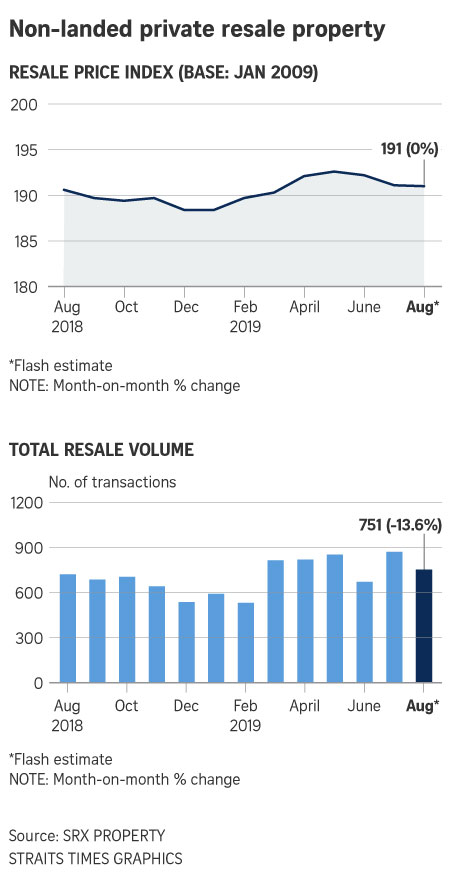 Covid-19: LMIRT to close all malls, retail spaces in Indonesia for 2 weeks

[WASHINGTON] The Federal Reserve announced a new facility Tuesday that will allow foreign central banks to...

[BANGKOK] Thailand's Cabinet has agreed to triple the number of workers receiving cash handouts to nine million to...