THE Government will be launching six land parcels for sale in the second-half of this year on the Confirmed List of the Government Land Sales (GLS) Programme, including the first hotel site in several years.

Another nine sites are placed under the Reserve List for H2 2018. These will be triggered for sale if a developer's indicated minimum price in his application is acceptable or there is sufficient market interest in the site.

A "white" site is a land parcel where a range of uses are allowed, although the Government is likely to stipulate a minimum component of a specific use or specific uses to meet its planning intentions.

All in, sites under the Confirmed List and Reserve List can yield up to 8,040 private residential units, 124,200 sq m gross floor area (GFA) of commercial space and 930 hotel rooms, the Urban Redevelopment Authority (URA) said on Wednesday.

"Nevertheless, there continues to be strong demand for land from developers. Transaction volumes are also rising," the URA observed.

"The government will continue to monitor the property market closely and adjust the supply from future GLS programmes, when necessary," the URA added. 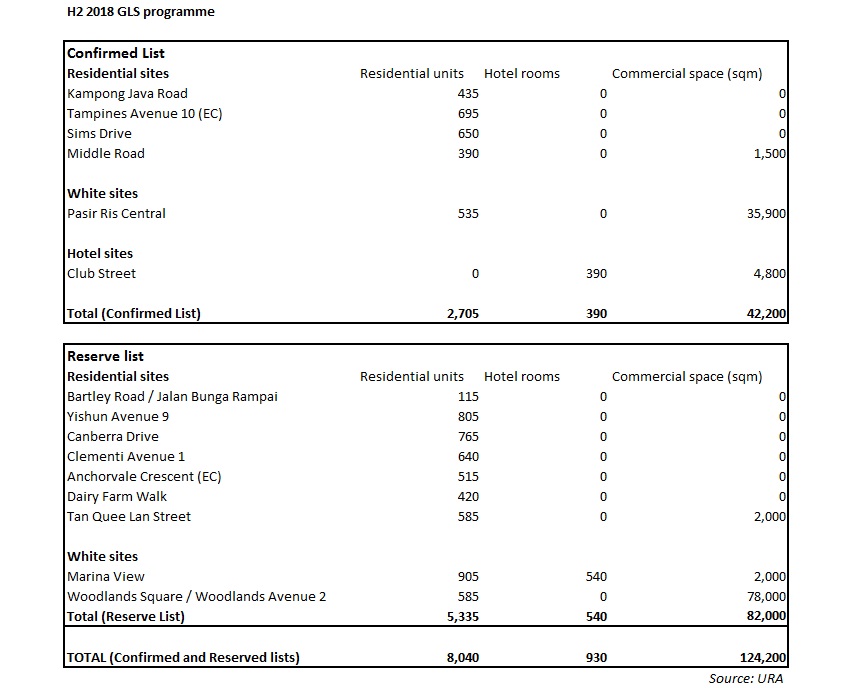 For commercial land supply, there is a jump in both the Confirmed and Reserved List of H2 2018 - representing a 94 per cent surge in commercial gross floor area (GFA) compared to H1 2018.

This includes a "white" site at Woodlands Square/Woodlands Avenue 2 and one at Marina View on the Reserve List of the H2 2018 GLS programme. URA said the Woodlands site will help to sustain the development momentum of Woodlands Regional Centre as a major commercial node outside the city, in line with the government’s objective of decentralising employment centres to bring job opportunities closer to homes.

For the first time after several years, the government is also re-introducing hotel rooms supply in its GLS programme amid rosier tourism outlook for Singapore in the next few years. Visitor arrivals and tourism receipts for 2017 hit record highs for the second time in two years. International arrivals increased by 6.2 per cent to 17.4 million last year  while tourism receipts rose by 3.9 per cent to S$26.8 billion.

"With the favourable global economic outlook, the Singapore Tourism Board is optimistic about tourism prospects for Singapore in the next few years," the URA said.

As a result, a total of seven residential sites remain on the H1 2018 Reserve List and will be carried over to the second-half 2018 GLS programme, the URA said.

ASCENDAS Real Estate Investment Trust's (Ascendas Reit) preferential offering to unitholders has launched at 9am on...

[BENGALURU] Australian shares rose to a near nine-month high on Monday, as the country's two most populous states...

THE following companies saw new developments that may affect trading of their shares on Monday:

KEPPEL Corp on Monday announced a slew of leadership changes at a few of its key business units including the...

Crossing the PMET divide: Can every job be a good job?