THE Urban Redevelopment Authority (URA) flash estimate for the first quarter of 2020 shows that its overall price index for private homes shrank 1.2 per cent over the preceding quarter.

This contrasts with an increase of 0.5 per cent quarter on quarter in the fourth quarter of last year.

Year on year, the index is up 2.2 per cent, according to the URA flash data released on Wednesday morning.

Prices of non-landed properties eased 1 per cent quarter on quarter in Q1 2020 after dipping 0.3 per cent in the previous quarter. 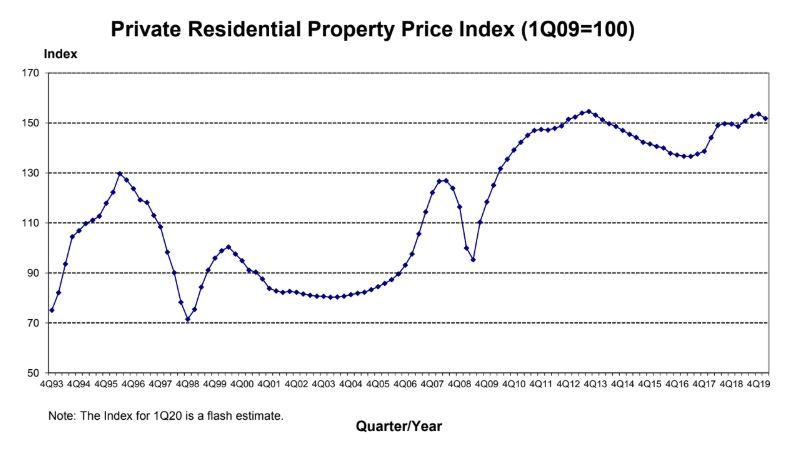 Giving a breakdown by region, the URA said that prices of non-landed homes in the prime areas or core central region slipped 1.5 per cent in Q1 2020, a smaller rate of decline compared with the drop of 2.8 per cent in the previous quarter.

In the city fringe or rest of central region, prices shed 0.5 per cent after dropping 1.3 per cent in the previous quarter.

In the suburbs or outside central region, prices fell 1 per cent, contrasting with the increase of 2.8 per cent in the previous quarter.

The flash estimates are compiled based on transaction prices given in contracts submitted for stamp duty payment and data on units sold by developers up till mid-March.

The statistics will be updated on April 24, 2020 when the URA releases its full set of real estate statistics for Q1 2020.

Noting the price declines in all segments, PropNex Realty's chief executive, Ismail Gafoor, said: "This can be attributed to three key factors caused by the Covid-19 outbreak. Firstly, a lack of foreign buyers as a result of restrictions in entering the country. Secondly, Singaporean buyers are more cautious, as they are concerned about their job security. Thirdly, developers are adapting to attractive pricing with low profit margin, which has led to lower prices."

That said, Mr Ismail pointed to the silver lining arising from the US Fed's interest rate cuts, which would lead to "genuine buyers taking advantage of the situation and picking up rightly-priced projects".

"However, under the current market sentiment, we are expecting URA's overall private home price index to drop in the range of 2 per cent to 3 per cent this year."

Cushman & Wakefield's senior manager for research in Singapore and South-east Asia, Wong Xian Yang, said: "Going forward, private home prices are expected to trend lower as Singapore heads into a recession. Buying sentiment is expected to remain muted over the short term until uncertainty in the labour market eases.

"However, prices may prove to be more resilient as compared to previous recessions. For example, during the Global Financial Crisis, URA's overall private home price index fell by 24.9 per cent over four consecutive quarters."

Mr Wong added that the Monetary Authority of Singapore has announced that eligible individuals can now apply to defer their residential property loan payments up to the end of this year. "This indirectly helps support current prices as property owners have more breathing space to navigate any cashflow difficulties. The government has also released a massive Covid-19 resilience package which should help stem job losses. For now, fire sales are not expected, as unemployment rates remain relatively low and most property owners are not under huge pressure to sell."

[FRANKFURT] Colder-than-normal weather settling into Europe over the next week is poised give the second boost to...

SINGAPORE expects to announce soon the details of a single platform for consumers to aggregate their financial...

OCBC on Tuesday said it has adopted the Equator Principles, an internationally recognised risk-management framework...