Nisha Ramchandaninishar@sph.com.sg@Nisha_BT
The Urban Redevelopment Authority's (URA) flash estimate for the third quarter of this year showed that the overall price index for private homes in Singapore edged up 0.8 per cent over the preceding three months.
ST PHOTO: KUA CHEE SIONG

THE Urban Redevelopment Authority's (URA) flash estimate for the third quarter of this year showed that the overall price index for private homes in Singapore edged up 0.8 per cent over the preceding three months.

This comes after a 0.3 per cent increase in Q2 this year.

Prices received a lift from non-landed properties in the Rest of Central Region (RCR) and Outside of Central Region (OCR) - driven partly by HDB homeowners who had completed their minimum occupation period in BTO (build-to-order) flats and were looking to upgrade - as well as from the landed segment, analysts said.

According to the URA flash estimate released on Thursday morning, prices of non-landed private homes were flat in Q3 versus Q2, after a 0.4 increase in the previous quarter.

However, prices of landed properties rose 3.8 per cent quarter on quarter in Q3, after remaining unchanged in Q2.

Leonard Tay, head of research at Knight Frank Singapore, noted that landed transactions more than doubled to 512 units for Q3 (based on transactions up to Sept 22), versus just 211 units in Q2.

Mr Tay added: "As the majority of landed home sales in Singapore occur in the resale market, it was only natural that many buyers of landed homes would have waited for the 'circuit breaker' to be over and for viewings to be possible in order to check out prospects before making a decision."

For non-landed homes, prices in the core central region (CCR) slid 4.9 per cent in Q3, reversing from a 2.7 per cent growth in Q2.

However, in the city fringe or RCR, prices went up by 3.3 per cent, compared to a decline of 1.7 per cent in the prior quarter.

In the suburbs or OCR, prices rose by 1.7 per cent in Q3, compared with a marginal increase of 0.1 per cent in Q2. 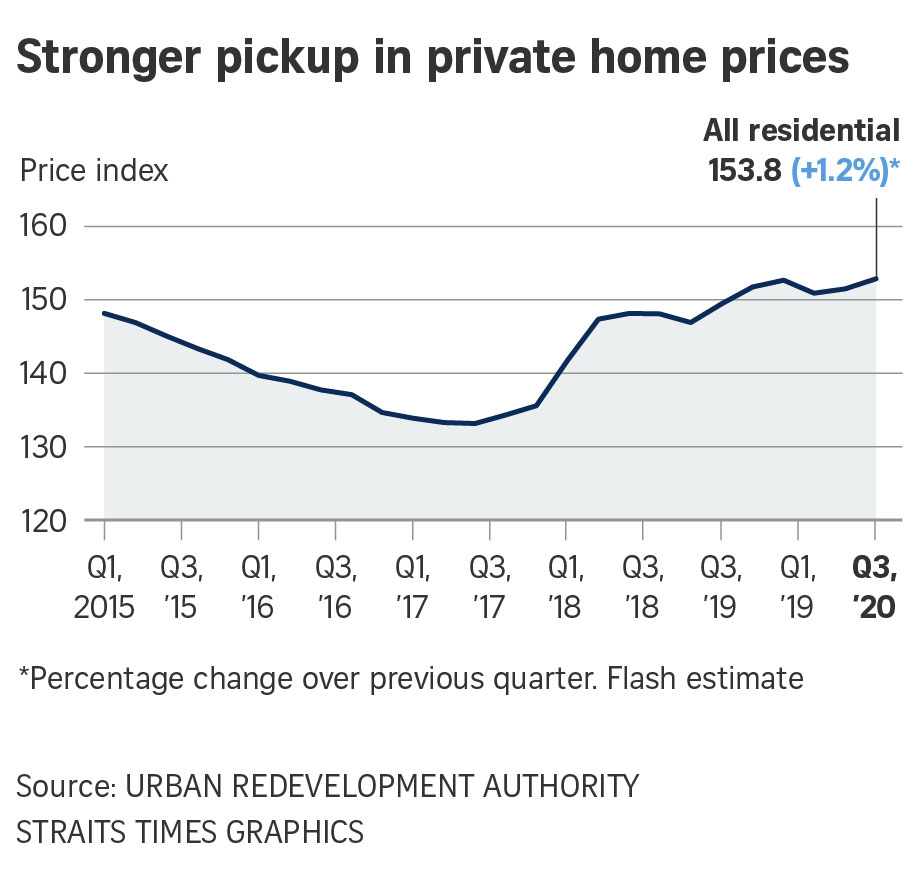 He said: "Year to date, prices are up 0.1 per cent and the private residential market has done remarkably well despite the economic environment."

However, Mr Wong projects demand could fall in Q4 owing to economic uncertainties once pent up demand is absorbed, while new measures by the URA to restrict the re-issuance of OTPs (options to purchase) could cause a slight pull-back.

Meanwhile, Christine Sun, head of research and consultancy at OrangeTee & Tie, reckons market sentiment may continue to improve. She said: "Demand of properties may remain strong in the coming months as more sectors of the economy reopen and the country eases into Phase Three of the post-'circuit breaker'."

She pointed to the "tidal wave" of quantitative easing implemented by the world's central banks, which should push up asset values and property prices as liquidity filters through economies.

For the year as a whole, OrangeTee & Tie has tweaked its projections for private home prices to clock between -1 per cent and 1 per cent.

The flash estimate is compiled based on transaction prices given in contracts submitted for stamp duty payment, and data on units sold by developers up to mid-September. The statistics will be updated on Oct 23, when the URA releases its full set of real estate statistics for the third quarter.

Q3 private home prices up; new home sales double over previous quarter, but rents are down