DESPITE Singapore's economic slowdown and downside risks ahead, private home prices rose for the second consecutive quarter, with at least one analyst saying this might prompt the government to respond with more cooling measures.

The Urban Redevelopment Authority's (URA) flash estimate for the third quarter of 2019 shows that its overall price index for private homes rose 0.9 per cent over the preceding quarter. This follows the 1.5 per cent quarter-on-quarter increase in the second quarter of this year.

Year on year, the index is up 1.7 per cent, according to the URA flash data released on Tuesday morning.

It also showed the third quarter price rise was driven by those of non-landed private homes, whose prices rose 1.7 per cent quarter on quarter, after increasing 2.0 per cent in the previous quarter.

Christine Sun, head of research and consultancy at OrangeTee & Tie, said: "While the housing market may continue to be influenced by global forces in the wider economy, our population growth, rising household income, and positive employment numbers will remain key drivers for both home prices and demand over the long term. In view of the current economic uncertainties, Singapore will remain an attractive safe haven for foreign investors to park their funds here.

"We expect prices to remain relatively stable for the rest of the year as the underlying demand for private homes is still healthy despite the current macro-economic uncertainties. We expect the number of private homes (excluding executive condominiums) to be sold in Q3 to surpass that of Q2 2019, but lower than the number sold year on year."

Brian Tan, regional economist at Barclays, said: "We believe the risk of more macroprudential measures to cool the housing market has risen to a relatively high level following this print. The continued rise in the private residential property price index suggests that its surprising jump in Q2 was not due to a distortion or measurement error.

"Instead, it may reflect an ongoing improvement in property market sentiment. We believe the government would view this as out of sync with the darkening economic outlook; the Ministry of Trade and Industry has downgraded the official GDP growth forecast range for the second time this year to 0-1 per cent from 1.5-2.5 per cent, with its base case for around 0.5 per cent.

"While a cooling of the housing market could add to economic headwinds, we doubt this will deter the government from announcing more measures in order to prevent a build-up of financial stability risks. Instead, we expect fiscal policy – in the form of the budget early next year – and foreign exchange policy to bear the burden of supporting the economy."

Giving a breakdown by region, URA said that prices of non-landed private homes in the prime areas or core central region (CCR) rose 2.9 per cent quarter on quarter, compared with the 2.3 per cent hike in the previous quarter.

URA's flash estimates are compiled based on transaction prices given in contracts submitted for stamp duty payment and data on units sold by developers up till mid-September. The statistics will be updated on Oct 25 when URA releases its full set of real estate statistics for the third quarter of 2019. 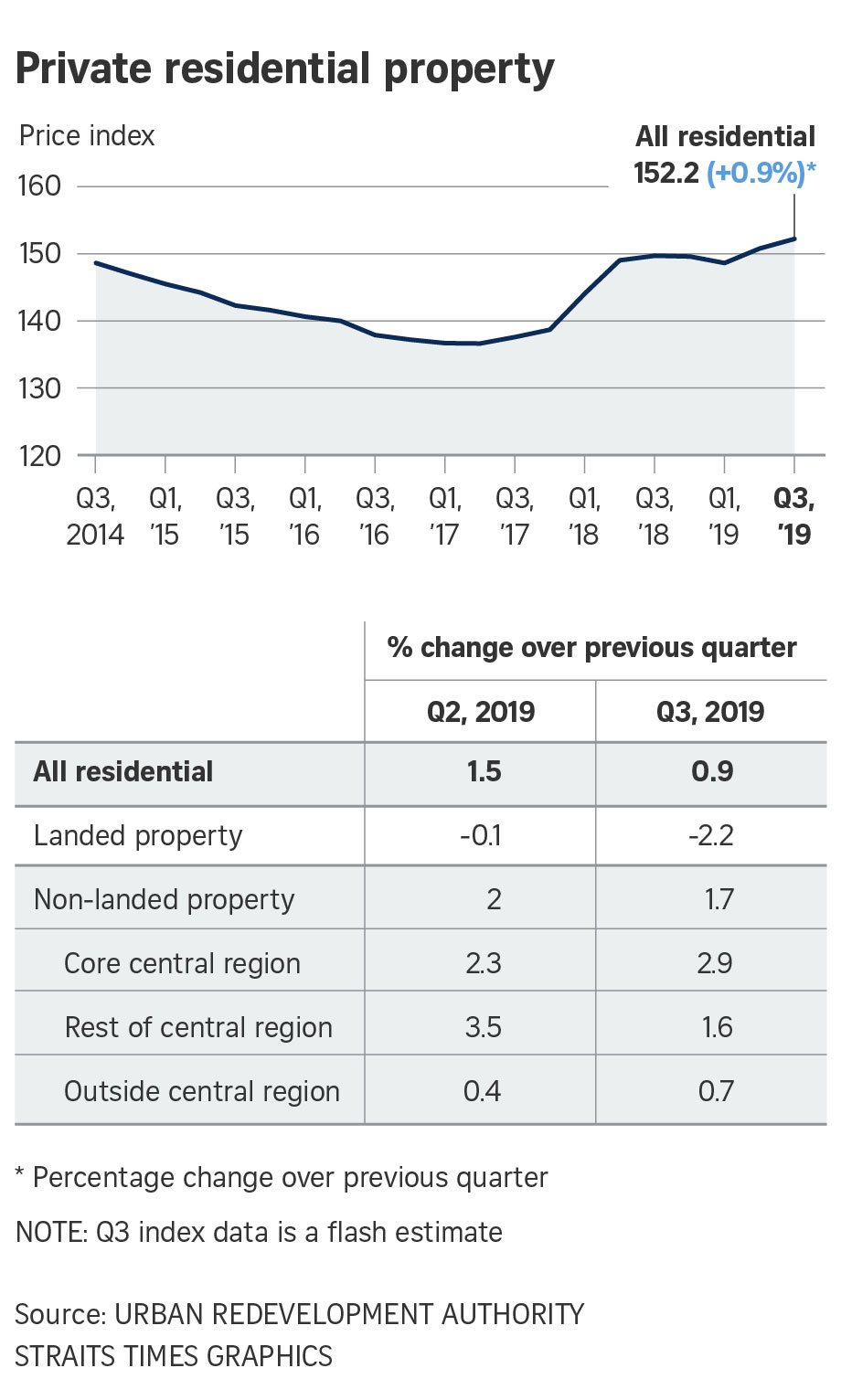 Busted retailers use bankruptcy to break leases by the thousands

Quebec pension fund suffers with too many malls, not enough tech

[QUEBEC] Caisse de Depot et Placement du Quebec posted a 2.3 per cent loss in the first half of 2020 after largely...

[WASHINGTON] The Pentagon said on Friday it awarded United Launch Alliance (ULA) and SpaceX US$653 million in...

With Brexit behind him, Boris Johnson tries to stop Scotland from leaving UK