Fiona Lamfiolam@sph.com.sg@FionaLamBT
The rental gap between suburban malls and those in Orchard will likely continue to narrow, said Knight Frank.
ST FILE PHOTO

THE increased activity in Singapore's retail sector hints at a bottoming out of rents by the end of this year or early next year, Knight Frank's research team said in a report published on Friday.

Overall retail rents are expected to fall by 10-15 per cent for the whole of this year due to recessionary pressures and safe-distancing restrictions, according to the real estate consultancy.

That being said, in the suburban region, rents of retailers will likely decline by just 7.5 per cent or less.

"As physical retail stores resumed operations, shopper traffic also returned to a greater extent in the suburban malls compared to the centrally located ones that are more reliant on the tourist dollar," Knight Frank analysts wrote.

Thus, the rental gap between suburban malls and those in Orchard will likely continue to narrow, given that the inflow of tourists into Singapore is still impeded by travel restrictions. Suburban retail rents are expected to recover sooner because they are supported by the domestic catchment resident population.

In the third quarter this year, prime retail rents islandwide decreased by 10.3 per cent year on year to average S$27.40 per square foot (psf) per month, as safe-distancing measures and border controls remained in place.

This drop was largely led by the 11 per cent fall in gross rents for prime retail spaces along the Orchard Road shopping belt, as stores there continued to struggle with the absence of international tourists, Knight Frank noted.

Prime spaces refer to rental-yielding units between 350 and 1,500 square feet with the best frontage, connectivity, footfall and accessibility in a mall. Such spaces are typically located on the ground level of a mall or the basement level of a mall that is linked to an MRT station or bus interchange. 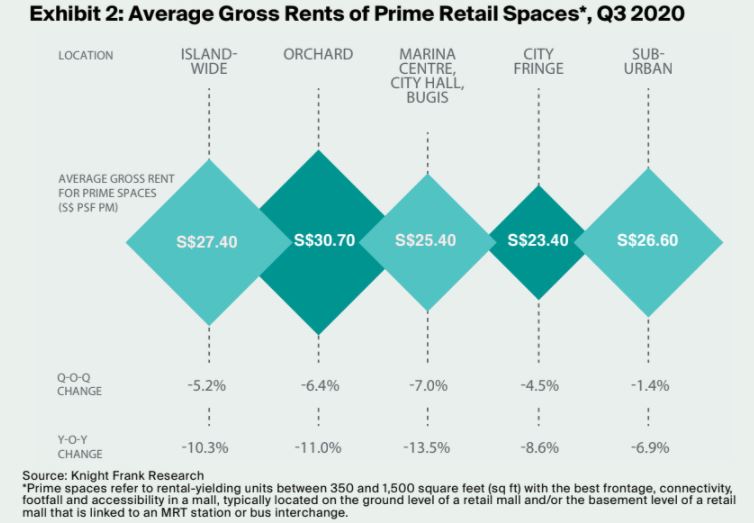 In the Marina Centre, City Hall and Bugis region, gross rents of prime retail spaces tumbled by 13.5 per cent year on year to S$25.40 psf per month on average for the third quarter.

Propping up the retail market were the suburban areas, where rents started to stabilise during the July-September period.

"As more employees work from home, the malls located within residential population centres were visited by many for daily necessities and household sundries," the analysts wrote.

The suburban region recorded the smallest drop in gross prime retail rents during the quarter, slipping 6.9 per cent on the year to average S$26.60 psf per month.

Quarter on quarter, rents of prime retail spaces in suburban areas also inched down by just 1.4 per cent, compared to the bigger declines of 6.4 per cent in Orchard, 7 per cent in Marina Centre, City Hall and Bugis, and 4.5 per cent in the city fringe.

While traditional retailers such as Topshop at VivoCity and Robinsons at Jem closed during the latest quarter, there were also newcomers to the scene. For instance, 100-year-old Hong Kong bakery Hang Heung opened its first Singapore outlet at Ion Orchard, Knight Frank noted.

Other notable retail openings in the three months include store expansions such as Foot Locker at Orchard Gateway @ Emerald and Decathlon at The Centrepoint.

In August, retail sales - excluding motor vehicles - fell by 8.4 per cent year on year, according to figures released by the Department of Statistics last week.

On a seasonally-adjusted month-on-month basis, total retail sales were higher by 1.4 per cent in August. Excluding motor vehicles, sales edged up 0.1 per cent on the month.

[SYDNEY] Long-haul, low-cost carrier AirAsia X Bhd has run out of money and needs to raise up to RM500 million (S$...

[SAN FRANCISCO] Nikola Corp shares sank as much as 16 per cent in Friday trading after the electric-truck startup's...

VW says has reached agreement in principle to buy Navistar for US$44.50 per share

[FRANKFURT] Volkswagen's truck unit Traton on Friday said it had agreed to sweeten its US$43 per share takeover bid...

WHO trial to assess other antibody, antiviral drugs after remdesivir doubt

[GENEVA] The World Health Organization (WHO) said on Friday it would assess monoclonal antibodies and other...

[NEW YORK] Nextdoor, a social network for neighbours sharing information or trading goods and services, is...

Fujifilm seeks approval for Avigan as Covid-19 treatment in Japan

Big Tech is here, and it's snapping up real estate in Singapore