Mixed-use project will have about 680 condos and 28,000 sq m of gross retail space
Lynette Khoo
An artist's impression of The Woodleigh Residences and The Woodleigh Mall. The developers are looking for potential partners to develop new and exciting retail concepts, including F&B and educational offerings.

THE first private residential-cum-retail project in the new Bidadari estate will offer some 680 residential units and close to 28,000 sq m of retail gross floor area.

The development - a maiden tie-up between Singapore Press Holdings (SPH) and Japanese developer Kajima Development - will be connected to Singapore's first air-conditioned basement bus interchange and will also boast a police post and community club.

OrangeTee & Tie and Savills Singapore are the appointed marketing agents for the two to four-bedroom condos in The Woodleigh Residences, while the developers will retain The Woodleigh Mall for recurring income.

SPH chief executive Ng Yat Chung told reporters at the project's groundbreaking on Wednesday that the actual date of launch and the number of units to be released have yet to be decided.

Ahead of the mixed-use project's completion in the second half of 2022, the developers are looking for potential partners to develop new and exciting retail concepts, including F&B offerings, educational offerings and medical services.

As part of the integrated project, Kajima Development and SPH will work with the People's Association and the Singapore Police Force respectively to build a 6,000 sq m Community Club and a 2,200 sq m Neighbourhood Police Centre.

Dr Lee said: "SPH's diversification into properties is an important element in our strategy to seek out new opportunities to add to our core media business."

Widely referred to as the "future Bishan" due to its central location, the Bidadari estate spanning 93 hectares is developed as part of Toa Payoh town, bounded by Bartley Road, Sennett Estate, Upper Serangoon Road and Mount Vernon Road. 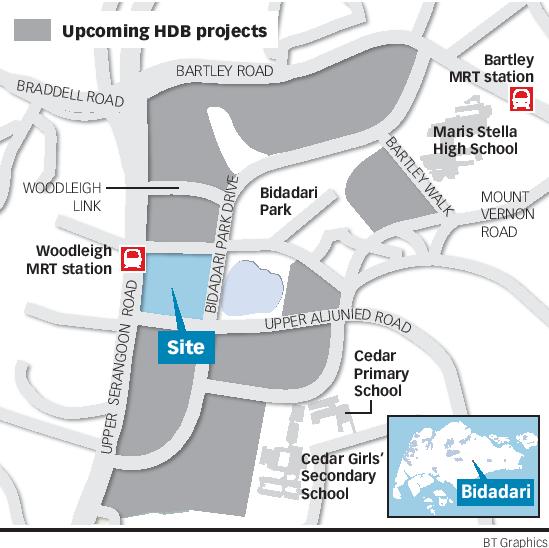 It is envisaged to be "a community in a garden", with new HDB flats launched in the area so far being over-subscribed.

"We are encouraged by the demand around the area," Mr Ng said.

Dr Lee also noted that the development will complement and benefit from the adjacent Bidadari Park while residents will enjoy views over the Alkaff Lake and Bidadari Heritage Walk.

"Connectivity will be another key attraction, with multiple transport links such as Woodleigh MRT station and direct access to Singapore's first air-conditioned basement bus interchange," he said.

The mixed-use development at the junction of Upper Serangoon and Upper Aljunied Road is also within one to two kilometres of popular primary, secondary and international schools.

Kajima Development project director Kazunori Ichihashi, who is based here, said that Japanese design concepts will be introduced in the residential component.

SPH, which publishes The Business Times, had six years ago engaged Kajima Overseas Asia Pte Ltd as the main contractor for the development of The Seletar Mall.

In June last year, SPH and Kajima Development tabled a top bid of S$1.13 billion for the much-coveted commercial and residential site, which is the first government land sales site offered in the new Bidadari Estate.

Their winning bid worked out to a land rate of S$1,181 per square foot per plot ratio (psf ppr) based on the maximum gross floor area allowed for the 99-year leasehold site.

This marks SPH's second residential project after Sky@eleven in Thomson Lane, which was completed in 2010 and sold out not long after. Its mall portfolio now comprises Paragon and The Clementi Mall, which are now part of SPH Reit, as well as The Seletar Mall.

SPH shares closed 2 cents up at S$2.50 amid a weaker market.