Their plans for the site include a condo and retail mall; Far East and Sekisui are nosed out by just 1.3%
An artist's impression of Bidadari’s Woodleigh Hillside estate.
PHOTO: HDB

THE much-coveted Bidadari commercial and residential site garnered 12 bids on Tuesday with the top bid of S$1.132 billion coming from an equal partnership between Singapore Press Holdings (SPH) and Kajima Development.

The highest bid translates to S$1,181 per square foot plot ratio based on the maximum gross floor area of 958,450 sq ft allowed for the 99-year leasehold site next to Woodleigh MRT Station.

The top bid was 1.3 per cent higher than the second-highest bid - from a tie-up between Far East Organization and Sekisui House, which offered about S$1.12 billion or S$1,166 psf ppr for the 2.54-hectare site, which is located near good schools.

SPH and Kajima propose to develop a condo project and a retail mall on this site, which is the first Government Land Sale site offered in the new Bidadari Estate.

Some property consultants consider the top bid to be bullish, as they noted that it was about 50 per cent higher than the S$775 psf ppr that MCC Land paid back in August 2014 for The Poiz Residences and The Poiz Centre site next to Potong Pasir MRT Station.

That said, JLL's Singapore head of research and consultancy, Tay Huey Ying, who was among those who shared this view, acknowledged that the higher unit land price was a reflection of the more buoyant sentiment today.

The recent sale of Jurong Point mall at over S$3,300 psf on net lettable area could have guided the pricing of the commercial component for the site, she added.

"Moreover, the top bidder will enjoy a first-mover advantage in capturing the private housing demand in this new estate." 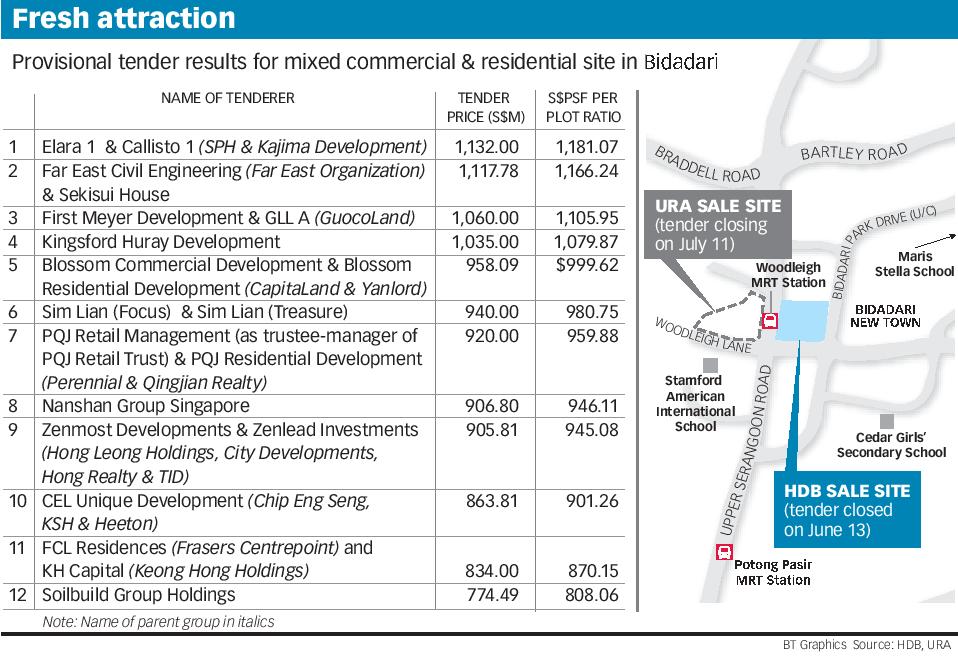 A spokeswoman for SPH noted that Bidadari was a new housing estate at the fringe of the city centre and that it was envisioned to be a "community in a garden".

Besides condo units and mall, "we will build a 65,000 sq ft community club, a 20,000 sq ft neighbourhood police centre, a commercial bridge towards Bidadari Park and an underpass to connect to the bus interchange as part of the development", she added.

Kajima Development project director Daisuke Tanaka said: "We like the Bidadari story; it's a young estate next to an MRT station.

"Buyers of the residences in the proposed project will be pretty close to the city centre and yet be able to enjoy green surroundings - including a park and a lake. There are many good schools nearby, so this will be a good place to raise kids but also a place owners will want to spend their whole lives . . ."

CBRE's head of Singapore and South-east Asia research, Desmond Sim, said that the site was "highly and closely contested", with the turnout of 12 bidders a testament to developers' hunger for land as well as the site's position as the "epicentre of the up-and-coming Bidadari Estate".

SLP International executive director Nicholas Mak noted the high participation rate at the tender was despite various conditions, including some relatively complicated technical ones, being imposed.

Among other things, the developer is "strongly encouraged to work with tenants of the retail portion on productivity initiatives". The developer's proposal will be subject to design reviews by a panel chaired by the Housing & Development Board, Mr Mak added.

CBRE's Mr Sim said that the site being located adjacent to a transport node, Bidadari Park and Alkaff Lake are "great placemaking attributes for both the residential and commercial components". "The growing residential catchment will also bring forth confidence for a strong retail concept. It could be the new go-to spot in a neighbourhood where public housing projects have been many times oversubscribed."

Its partner for the Bidadari bid, Kajima, developed the 71 Robinson Road office project in the CBD as well as Bishopsgate Residences and Sui Generis condo in the Balmoral area. It also partnered Pontiac Land in the Millenia Singapore development. Kajima Development is the property development arm of Singapore-based Kajima Overseas Asia, which in turn is the South-east Asia arm of Japan's Kajima Corporation, whose businesses include construction, property development, engineering and design.

[SINGAPORE] A new task force will be formed to study how to raise the wages of low-income workers and push...

HYFLUX has asked its Middle Eastern suitor Utico to address concerns flagged by creditor groups before a virtual...

[SINGAPORE] One of the world's largest sovereign wealth funds said "divisive trends" in areas such as economics,...

[SINGAPORE] A majority of Singaporeans aren't concerned about the presence of foreigners in the city-state even as...

10 new Covid-19 cases in Singapore, none in community

[SINGAPORE] There were 10 new coronavirus cases confirmed as of Sunday noon, taking Singapore's total to 57,876.