Concern rising that negative news on the economy and jobs market is hurting buying sentiment
Lynette Khoo
The price decline - the steepest since 2013 - has made it even more uncertain if earlier signs of a bottoming-out in prices can continue amid mounting concerns over the state of the economy and employment.
PHOTO: ST FILE

The price decline - the steepest since 2013 - has made it even more uncertain if earlier signs of a bottoming-out in prices can continue amid mounting concerns over the state of the economy and employment.

Christine Li, research director at Cushman & Wakefield, said: "The recent uptick in the take-up rates in the developers' new home sales has given some hope that the prices are bottoming out soon, but the sustainability of the recovery in take-ups and prices is still in question on the back of a poorer economic outlook."

The 12 consecutive quarters of decline culminated in a 10.8 per cent drop in prices and a 10.7 per cent fall in rents since the peak of Q3 2013. Prices and rents had slipped by a more moderate 0.4 per cent and 0.6 per cent respectively in the second quarter.

Virus' impact on new home sales expected to be short-term; demand could pick up in H2 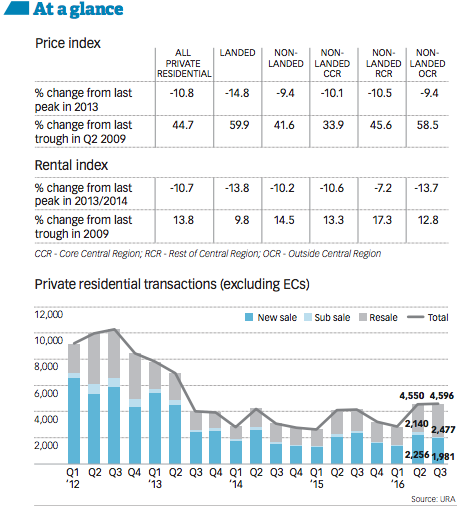 URA's Q3 data included, for the first time, the net prices of de-licensed projects, which refer to those that have obtained the Certificate of Statutory Completion (CSC) and have individual strata titles issued to buyers.

While this tweak could have contributed to the steeper price fall, there is growing concern that the spate of negative news on the economy and the jobs market may be hurting buying sentiment.

"Worries over a weaker economy, news of job cuts and fears of a coming recession seem to have adverse impact on the property market."

With foreigners bearing the brunt of job losses, the softening employment market is hurting residential leasing, he said.

URA data shows that the price decline in private homes in Q3 was led by landed properties, which fell 2.7 per cent, after a 1.5 per cent decline in Q2.

Non-landed properties dropped 1.2 per cent in price, after a 0.1 per cent dip in Q2. Those in the prime area or the Core Central Region (CCR) fell the most, 1.9 per cent, after inching up 0.3 per cent in each of the two preceding quarters.

But Savills research head Alan Cheong noted that the steeper price falls seem counter-intuitive when one considers the pent-up demand reflected in the strong turnouts at showflats of recent project launches and the strong take-up in some cases.

To be clear, sales momentum held up during the quarter, with some 4,596 private residential units (excluding executive condominiums or ECs) transacted, similar to the 4,550 units transacted in Q2.

This was led by resales, which made up more than half (53.9 per cent) of all private home transactions in Q3, up from 47 per cent in Q2. The 2,477 resales represent a 15.7 per cent increase from the previous quarter.

Ms Li said: "Given that the demand for the secondary market, especially the resale market, is a more accurate indicator of the owner-occupier demand, the increased transaction volume is a good sign that buyers are coming back to the market after prices have fallen to more attractive levels."

PropNex Realty CEO Ismail Gafoor, who sees little respite for the private residential market, at least in the short term, said that this should translate to "measured" land bids by developers in order for them to gain some flexibility to adjust prices in the future.

Meanwhile, public housing prices continued to stabilise. Resale prices of public housing flats remained unchanged in Q3 from Q2, according to the Housing & Development Board.

But resale transactions slipped 5.5 per cent from Q2 to 5,514 in Q3, the latest Q3 data from the Housing & Development Board shows.

Lee Nai Jia, head of South-east Asia research at Edmund Tie & Company, noted that the HDB resale market was entering a new state of equilibrium as the price gap between buyers and sellers narrows. "We anticipate public homes in the central area to command high prices, unless policies - aimed at protecting the objectives of public housing - are enacted."

[SINGAPORE] Bitcoin volatility is back to levels not seen since early November, thanks to a sudden tumble toward the...

[BEIJING] China reported the biggest drop in new cases from the coronavirus outbreak in nearly a month on Thursday...