THE five top-performing billionaire stocks in Singapore have averaged a total return of 49.0 per cent in the year to date, the Singapore Exchange said on Tuesday.

Billionaire stocks are those with over S$1 billion market capitalisation. Over the last 12 months, the top five performers were Hi-P International (89.8 per cent), SBS Transit (47.4 per cent), Thai Beverage PCL (38 per cent), Venture Corp (35.1 per cent), and Silverlake Axis (34.7 per cent).

Their one-year, three-year and five-year total returns averaged 6.4 per cent, 139.9 per cent and 171.7 per cent respectively, said SGX in a report from its "My Gateway” investor education portal.

SGX also reported that out of the over 100 billionaire stocks it has, 36 were found to have dividend yields of 4.5 per cent and above, compared with the current Straits Times Index (STI) benchmark yield of 4 per cent.

Out of these 36 stocks, 28 are real estate investment trusts (Reits), stapled and/or business trusts, while eight are companies, including six STI constituents.

Meanwhile, the five highest-yielding companies are StarHub (10.5 per cent), Singtel (5.7 per cent), Hong Leong Finance (5.4 per cent), Frasers Property (4.8 per cent), and SIA Engineering (4.8 per cent). These have an average yield of 6.2 per cent, and fall under the telecommunications, financial services, real estate development and transport services sectors. 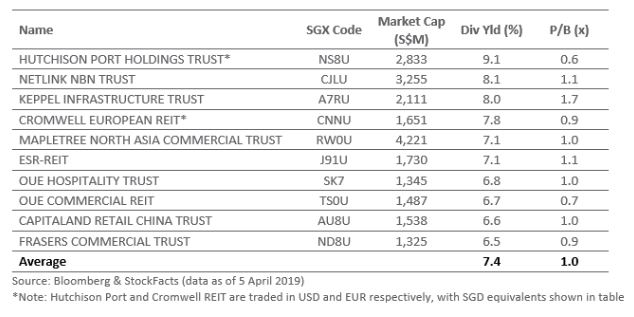