Cai Haoxianghaoxiang@sph.com.sg@HaoxiangCaiBT
The Nikkei's 20,881.27-point close on Wednesday is the highest since December 1996, though still a way off from the all-time closing high of 38,915.87 clocked at the end of 1989.
PHOTO: AFP

It’s taken a while

DRIVEN by improved earnings and optimism over the strength of its economy, Japan's benchmark Nikkei 225 Index on Wednesday hit a closing high not seen in almost 21 years.

The Nikkei's record-breaking push came in the past month, boosted by companies like Fast Retailing, the owner of casual wear brand Uniqlo, industrial robot maker Fanuc, and telco and tech giant Softbank.

Kenneth Yeo, a futures trader at Omega Proprietary Trading, said: "This is an amazing thing. Usually, the Nikkei goes up when the Japanese yen depreciates. Currently, it is moving regardless of the dollar-yen."

In the past two weeks, while the yen was flat against the dollar, the Nikkei notched a 3 per cent gain.

Mr Yeo speculated that one substantial buyer of the index throughout the year was Japan's Government Pension Investment Fund (GPIF), which had been investing in domestic stocks.

The Nikkei's milestone drew a tongue-in-cheek Twitter post from a futures trader from another generation - Nick Leeson, whose fraudulent acts to hide losses incurred in speculating on Nikkei futures in Singapore from 1992 to 1995 caused the collapse of Barings Bank, the UK's oldest merchant bank.

"Nikkei225 at highest level today since 1996 - probably not far off my break-even point. If only they'd waited!!" said Mr Leeson, now a conference speaker.

After the bursting of Japan's asset price bubble in 1992, its economy had stagnated, disappointing many an investor hoping for a recovery.

Repeated attempts to stimulate the economy has led to the country having one of the highest public debt burdens in the world.

Budget-related issues are political hot potatoes. A snap election will take place this month, in a bid by Prime Minister Shinzo Abe to get voter approval on how he plans to use tax revenue from an upcoming, unpopular consumption tax hike.

"The latest data suggests we might just be seeing the start of an upward trend in growth and inflation," he said. 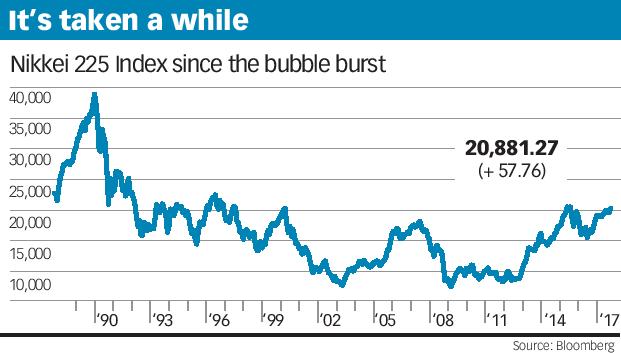 Japanese stocks have also shrugged off tensions around North Korea and its early-September nuclear test, and a subsequent ballistic missile launch in mid-September that flew over Japan.

Rating agency Moody's said in an October note that a broad and protracted conflict in the Korean peninsula will be detrimental to Japan's credit rating, due to lower economic growth and increases in military spending.

European markets were relieved after the leader of Spain's Catalonia region asked its parliament to suspend the effects of a "yes" vote on independence.

The MSCI All Country World Index, which tracks developed and emerging markets, is at an all-time high. Chinese stocks are at highs in Hong Kong, especially those of Chinese banks. Emerging markets are boosted by a weak US dollar.

In the bond markets, 10-year yields on US government bonds have rebounded from a low of nearly 2 per cent at the beginning of September, to around 2.35 per cent now.

OCBC's private banking arm Bank of Singapore, in a note published on Wednesday, said it advocates investors to hold positions in US and European banks.

"Steeper yield curves are expected to boost net interest margins, while better growth prospects will reduce credit costs. This is particularly favourable for many European banks," it said.

But on the sidelines, bond fund managers like James McAlevey, a senior portfolio manager at Aviva Investors, are betting that the placid low interest rate environment will not last forever.

The US Federal Reserve is reducing its balance sheet from this month by not reinvesting the proceeds as its massive bond portfolio matures; an overwhelmingly price-insensitive buyer is thus being removed from the market, Mr McAlevey said.

One of his positions in an absolute-return fund involves buying both call and put 20-year interest rate options at the same strike price - essentially a bet that fluctuations in US government bond yields will become more violent.

The position is not sizeable, but offers some insurance against a crisis-like situation where bond volatility can stay elevated for a while, he said.

[BRUSSELS] A German app developer has filed a complaint with European Union antitrust authorities against Google and...

COLOMBO] Sri Lanka will conduct an investigation into allegations its troops committed war crimes during a conflict...

THE decline in retail rents gathered pace in the fourth quarter, taking the full-year drop in the Urban...