Compliance costs, short-term bias among main factors behind decision; continuous disclosure rules beefed up in specific areas
Claudia Tanclaudiat@sph.com.sg@ClaudiaTanBT
Angela Tanangelat@sph.com.sg
In a move that is broadly welcomed by the market, the Singapore Exchange Regulation (SGX RegCo) announced on Thursday that quarterly reporting (QR) is no longer required for listed companies unless they are associated with higher risks
ST PHOTO: CHONG JUN LIANG

The evolution of quarterly reporting in Singapore

Changes to the continuous disclosure regime

IN a move that is broadly welcomed by the market, the Singapore Exchange Regulation (SGX RegCo) announced on Thursday that quarterly reporting (QR) is no longer required for listed companies unless they are associated with higher risks.

This comes as the regulator strengthens continuous disclosure requirements for all listed companies.

With effect from Feb 7, a new risk-based approach to QR will replace the current reporting requirement based on companies meeting a certain minimum market capitalisation.

QR was implemented in 2003 for listed companies with market capitalisation of above S$20 million, and subsequently raised to S$75 million amid cost concerns for smaller companies. This resulted in around 70 per cent of SGX-listed companies being required to report their results on a quarterly basis.

Under the new approach, a firm only has to undertake QR if it does not have clean audit opinions or face financial and regulatory compliance issues. SGX will be releasing a list of around 100 companies that are not freed from QR once the revised rule comes into effect, and this list will be reviewed quarterly. Otherwise, companies are only required to do semi-annual reporting.(see amendment note)

In January 2018, SGX sought public feedback on changes to the QR framework, including whether to remove it entirely or recalibrate the QR requirement. This was in part due to the current approach being "too arbitrary and not meaningful in targeting companies that should be doing more frequent reporting", according to SGX's press statement.

SGX RegCo is also taking the cue from global markets like Hong Kong and Australia, which reserve QR for higher-risk companies. 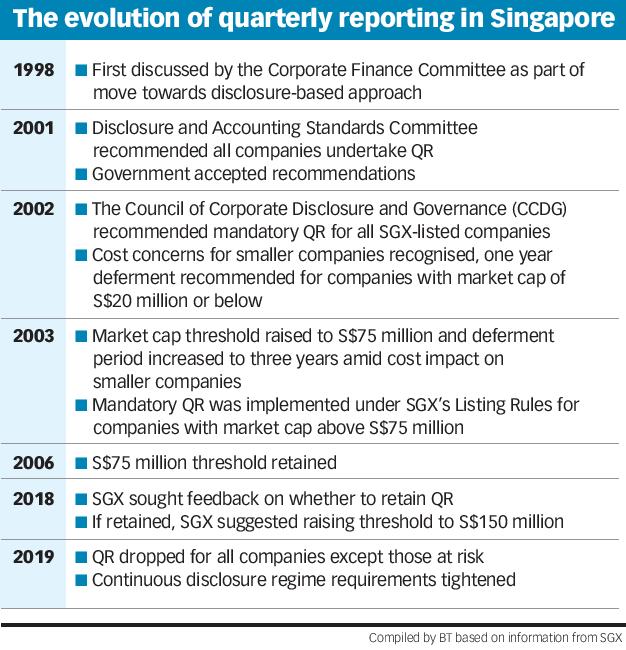 "The international trend is moving away from QR," Tan Boon Gin, chief executive officer of SGX RegCo, told the media.

"The business landscape is evolving rapidly. In order to meet these changes, companies in general must be allowed to consider and implement longer term strategies," he added.

When asked about the key drivers that led to the eventual removal of mandatory QR, Mr Tan told the media: "If we just use a size-based approach, it will not necessarily capture all the companies we want to do QR."

Another factor that triggered the initial consultation on the QR framework was concerns surrounding compliance cost. Such a sentiment was echoed by Wellington Foo, chief financial officer of UOL Group.

"With a longer reporting cycle, the board and management will be able to focus on enhancing value and sustainable growth over the longer term, rather than be concerned with meeting quarterly reporting deadlines," he said.

Having said that, companies are encouraged to consider providing voluntary business updates to shareholders.

"These may include market trends that could materially affect the performance and progress of its strategic and long-term goals", according to recommendations by the Corporate Governance Advisory Committee (CGAC), an industry-led body set up by the Monetary Authority of Singapore to advocate good corporate governance practices among listed companies.

In response to The Business Times on whether the company has plans to voluntarily undertake QR, a spokesperson from DBS Bank said: "We will review if and how we should transition, taking into account our current engagement model with our key stakeholders."

SGX RegCo's Mr Tan also pointed out that disclosures should be immediate rather than wait for a milestone like QR.

"That is why we have continuous disclosure rules and we are tightening this by taking a targeted approach. This means focusing on disclosures of greatest concern," he said.

As such, continuous disclosure requirements will be strengthened in areas such as interested person transactions (IPTs), significant financial assistance, significant transactions and dilutive secondary fund-raising. 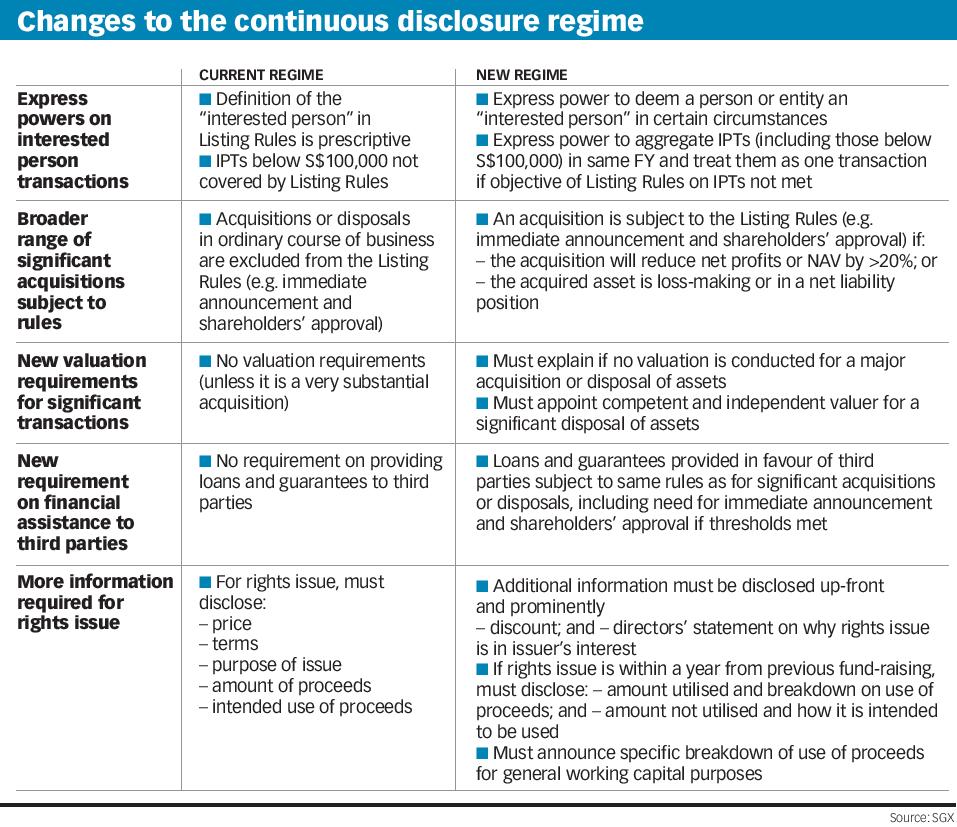 Most market watchers are in favour of SGX's move.

Stefanie Yuen-Thio, joint managing partner at TSMP Law Corporation, said it is good that the change was not limited to doing away with mandatory QR, but also involved beefing up ongoing disclosure requirements in situations of higher risk.

Under the existing rules, larger companies are subjected to QR. But it is often the smaller companies, which do not have as much financial buffer or the resources to hire good financial and compliance professionals, where the risks of financial shortcomings are higher, said Ms Yuen-Thio.

"The new rules right that balance," she added.

While strengthening disclosure and other requirements will help, corporate governance advocate Mak Yuen Teen pointed out that the devil is in the details of how the risk-based approach is implemented and the measures to mitigate risk of not having QR. "SGX and other regulators must be more prepared to take actual enforcement actions against directors and key officers for disclosure breaches," he said.

On the other hand, some retail investors are unconvinced that the new approach can replace mandatory QR.

While continuous disclosure is a positive thing, quarterly reports serve a different purpose, according to seasoned investor Mano Sabnani.

"QR gives investors a bird's eye view and investors can get a clear picture of the company's performance," said Mr Sabnani.

Unlike blue chips and bigger companies, which are widely covered by analysts and the media, smaller companies do not get much coverage to begin with, according to Mr Sabnani.

However, SGX RegCo's Mr Tan highlighted that investors will stand to benefit from the new framework.

"Adopting a risk-based approach means that companies that are of greatest concern to investors have to do QR so investors can better monitor these companies," he said.

David Gerald, founder and chief executive officer of the Securities Investors Association Singapore agreed that companies that practice good corporate governance and provide continuous timely information should not be subjected to QR.

The regulator has also set out its expectations on companies' handling of material information, including making immediate announcements where there is a change in the issuer's near-term earnings prospects or where there are ongoing developments. When it comes to efforts to increase regulatory presence, a whistle-blowing office has been set up to address tip-offs, feedback, complaints and short-seller reports on companies.

Amendment note: An earlier version of this article incorrectly stated that currently around 100 companies are subject to mandatory QR. These companies are in fact companies associated with higher risks that will need to continue QR after new rules kick in. The article above has been revised to reflect this.

[SYDNEY] The Australian state of Victoria will offer businesses another A$3 billion (S$2.99 billion) in support,...

[LONDON] AstraZeneca has resumed British clinical trials of its Covid-19 vaccine, one of the most advanced in...

[TOKYO] Naomi Osaka's victory in the US Open was hailed Sunday by media and officials in Japan who broadly welcomed...

Suga keeps pressure on Japan's telecoms ahead of elections