Investors are sanguine about Singapore's stock market even as the nation faces the risk of a technical recession, as a positive outlook for dividends and earnings overshadows threats from the US-China trade spat.
PHOTO: ST FILE

[SINGAPORE] Investors are sanguine about Singapore's stock market even as the nation faces the risk of a technical recession, as a positive outlook for dividends and earnings overshadows threats from the US-China trade spat.

Singapore's trade-reliant economy unexpectedly contracted by 3.4 per cent in the June quarter from the previous three months, reflecting sluggish global trade and electronics cycles. Following the data release, the International Monetary Fund on Monday cut Singapore's 2019 growth forecast to 2 per cent from 2.3 per cent.

The benchmark Straits Times Index, on the other hand, has surged 9.3 per cent this year. The gauge is among the best performers in South-east Asia and is expected to rise further. The reason behind such optimism is more than half of the 30-member gauge generate 50 per cent or more of their revenues outside the city-state, hence are less influenced by the domestic economy, data compiled by Bloomberg show.

A major producer of electronics and semiconductors, Singapore's trade value is more than double its US$364 billion economy. Amid trade tensions, not only did the economy contract unexpectedly on a quarter-on-quarter basis, exports slumped dramatically in June, making it the second-worst month since the global financial crisis.

"The stock market and domestic economy are two different animals, and have been for some time now," said Daryl Liew, head of portfolio management at Reyl & Cie in Singapore. "Most Singapore-listed companies such as the banks and Singapore Telecommunications are pan-Asian plays."

What's more, cash is king for equity investors in Singapore, who expect the market to cough up a dividend yield of 4 per cent amid low valuations this year, compared with 2.9 per cent on the MSCI Asia Pacific Index. The benchmark is trading at a price-to-earnings multiple of 12.8 times on one-year forward earnings, lower than its 10-year average of 13.5, according to data compiled by Bloomberg.

"Singapore is one of the few markets in Asia to be trading below its mean historical price-to-earnings ratio yet paying out one of the highest yields," said Kum Soek Ching, head of Southeast Asia research at Credit Suisse Group AG's private banking unit. 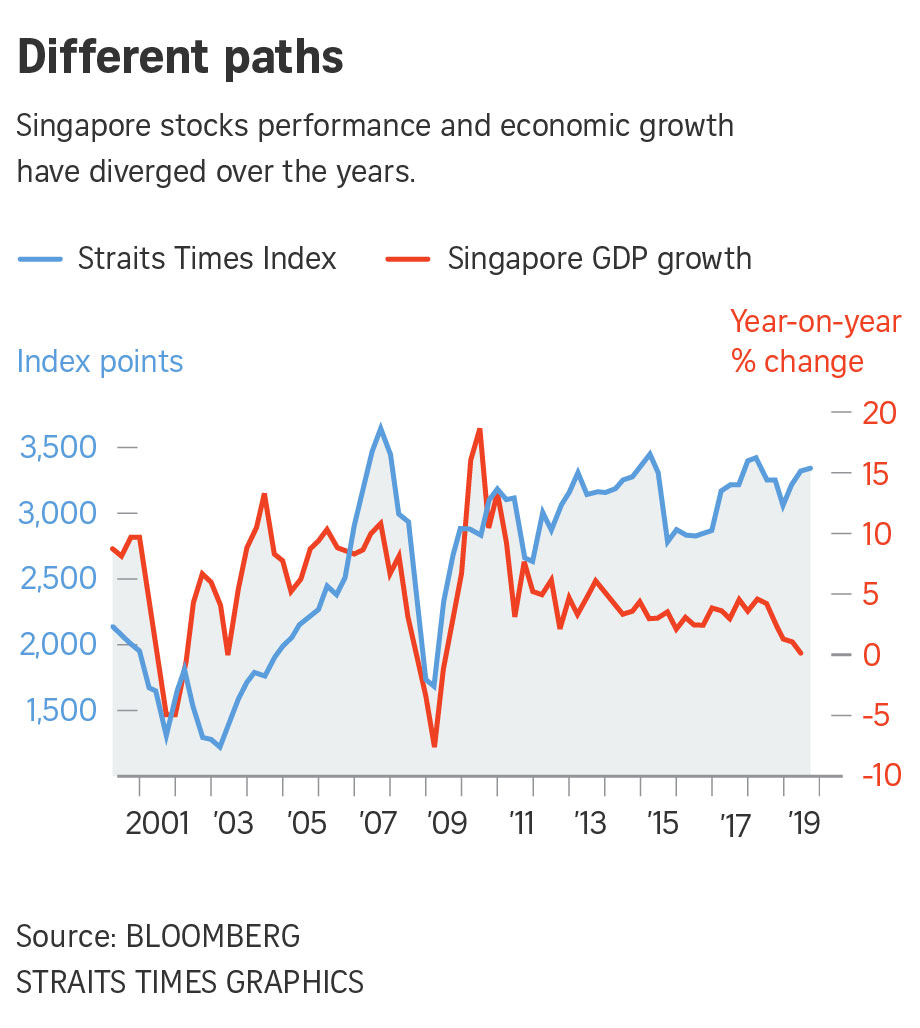 And while earnings estimates fell at the start of the year, they have risen from their lows in February. Looking ahead, corporate profits are expected to grow by 4 per cent for 2019 compared to 21 per cent decline in the previous year, based on data compiled by Bloomberg.

[DUBAI] Dubai said Tuesday it will support Emirates Airline with a capital injection to help the carrier through the...

[TOKYO] Japanese banks are scooping up cheap dollar funding from the US Federal Reserve to satisfy demands for the...

US retail rent negotiations get messy with US$20b due

[WASHINGTON] Retailers and landlords are locked in an awkward dance as April rent comes due.

US consumer confidence fell in March to lowest since 2017

[WASHINGTON] US consumer confidence slumped in March to the lowest level since mid-2017 even before the worst of...

ASCENDAS Real Estate Investment Trust (Reit) on Tuesday said it has acquired a 25 per cent equity stake in business...