The Hong Kong-listed Internet giant, known for its WeChat messaging app and online games, saw its shares rally to HK$420 on Monday, bringing its market value to HK$3.99 trillion (S$693.59 billion) at the close.

With that line crossed, Tencent is now closing in on the likes of Facebook and Amazon. Top of the pole is Apple, with pundits predicting the iPhone maker could be the first to break the US$1 trillion mark in the months ahead.

Tencent's market cap is also now above Jack Ma's e-commerce giant Alibaba Group Holding, which stands at US$474.15 billion, with Baidu far behind at US$82.97 billion.

It brings the personal wealth of Tencent's founder and chief executive Ma Huateng - also known as Pony Ma and no relation to Jack - close to US$47 billion.

"Some of this year's best performers are worth holding as long-term bulls," said Wang Menghai, a Shanghai-based money manager at Fullgoal Fund Management Co told Bloomberg. "It would be a wrong decision to sell it just for some short-term gain." 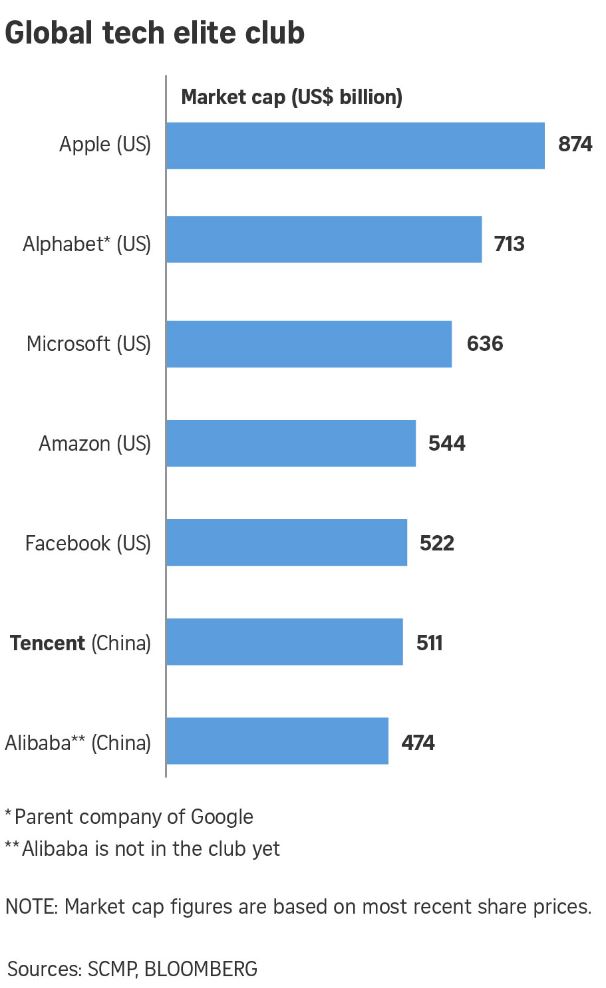 Its WeChat, China's most popular messaging service, has close to one billion users.

Online and mobile games, another big revenue stream, brought in over US$4 billion in sales last quarter. Its fantasy role-playing game Honour of Kings, which is based on Chinese historical characters, is so popular that Tencent had to introduce curbs on play time earlier this year after reports of children being seriously addicted to it. The game will debut in the US next year.

Other fast-growing parts of the business include digital content such as video, as well as online advertising, said CNBC.

Tencent president Martin Lau said in last week's earnings call that its Youtube equivalent, Tencent Video, has become the video streaming service with the largest paying subscriber base in China, at 43 million subscriptions.

Over the past year, several of Tencent's subsidiaries have made stellar debuts on stock exchanges in Hong Kong and the US, most recently its online publishing platform China Literature which nearly doubled in price on its firt trading day earlier this month.

Their genuine prowess aside, the Financial Times points out that the rise of China's tech giants has been greatly aided by Beijing's ban on the US titans - Facebook, Twitter, YouTube and Google. There is nothing to rival WeChat and while Amazon was let in, it was quickly quashed by Alibaba's Tmall and Taobao e-commerce sites.

506 new Covid-19 cases in Singapore, including 2 Singaporeans and PRs

[SINGAPORE] A total of 506 new coronavirus cases were preliminarily confirmed on Saturday afternoon, including two...

[SINGAPORE] The Malaysian economy is about to feel the full brunt of the coronavirus pandemic.

Merkel a 'no' for Trump's in-person G7 summit: report

[WASHINGTON] German Chancellor Angela Merkel will not attend an in-person summit of G7 leaders that US President...

[NEW YORK] Options are pricing in odds that the seven top US banks will cut their dividends by an average of 30 per...