Rates are up, but container lines face choppy waters ahead

Analysts see another storm coming after current calm as capacity oversupply remains unresolved
Jacqueline Wootsjwoo@sph.com.sg@JacquelineWooBT
2017 has been a calmer year for global container shipping following a tempestuous 2016, but the industry will once again have to navigate choppy waters in the next couple of years.
ST PHOTO: ONG WEE JIN

Top 20 players in a post-consolidation world

2017 has been a calmer year for global container shipping following a tempestuous 2016, but the industry will once again have to navigate choppy waters in the next couple of years.

The biggest wave that could wash away the nascent recovery is unresolved capacity plaguing the sector and the consequent price war feared by analysts.

"2018 looks tricky to navigate and to predict, so a major recovery in the industry appears a little unrealistic," said Andy Lane, a partner at shipping consultancy CTI Consultancy.

"Without explosive growth, we are unlikely to see the gap between supply and demand close materially, until 2020 at least - and even that is based on the assumption that there is 'sensible' new ship ordering, which is never a given," he tells The Business Times.

Mr Lane acknowledges the market this year has "vastly improved" over 2016 - the year that saw the collapse of South Korea's once-mighty Hanjin Shipping Co - though not so much when compared with 2015.

"We see many of the shipping lines talking up the industry. Some of this is to gain investor confidence, some is wishful thinking, and some is hype about the present reasonable picture. There is little anecdotal evidence, however, that this bubble will be able to stand the test of time," he says.

The cutthroat race for a bigger slice of the market has not died down, even with the unprecedented wave of consolidation that has taken place over the last two years. 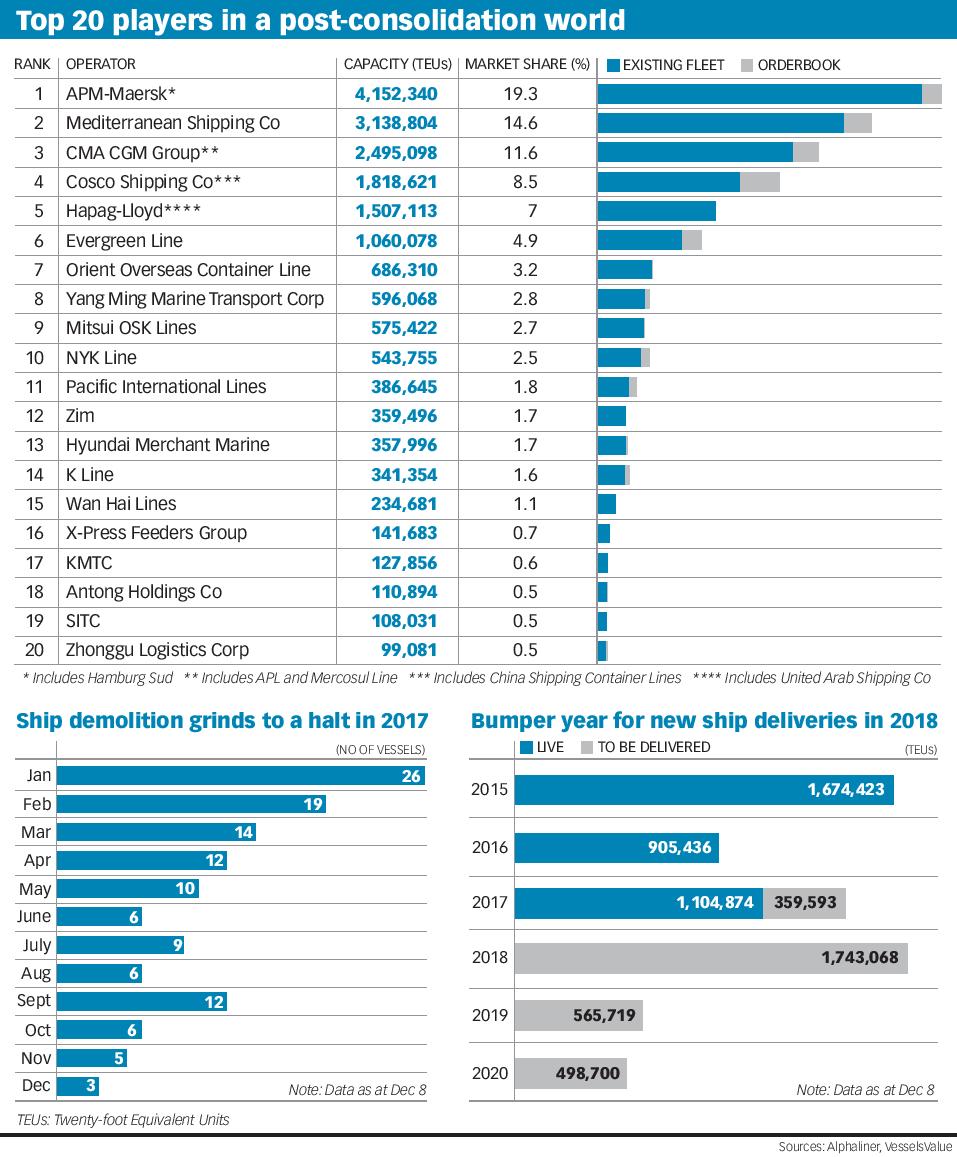 Ocean Shipping Consultants director Jason Chiang said major players have unveiled plans to build new ships in recent months - "at a time when demand has barely kept up with supply".

Mediterranean Shipping Co, the world's No.2 carrier, for instance, in September announced plans for 11 new giant ships to be delivered from 2019, each to come with a staggering capacity of 22,000 twenty-foot equivalent units (TEUs). CMA CGM has also confirmed a US$1.2 billion order for nine such ships from 2020. It also has other vessel deliveries before then.

The 22,000 TEU ships weigh in as the largest vessels on order today.

"This does not bode well for 2018 and 2019. It could result in a decline in freight rates when the ships are deployed," says Mr Chiang. "And if this continues, we might see losses start to come back in 2018."

The new mega-vessel orders outline the shipping lines' efforts to remain competitive in the long haul, given that such ships are typically accompanied by lower operating costs. But Mr Chiang does not expect all of the additional capacity to come into use, "as demand is unlikely to match the increase in capacity".

At the same time, vessel scrapping has also slowed, despite a huge number of container demolition sales seen at end of 2016 and at the start of this year.

One reason for this is that charter rates for vessels have risen, says Mr Toby Yeabsley, head analyst of shipping data firm VesselsValue.

He believes more vessels need to be scrapped in order for the market to find a better balance, but points out that 2018 is set to be a "bumper year" for container vessel deliveries, with 224 ships scheduled to hit the water, compared with 68 in 2019.

CTI's Mr Lane adds: "So the overall supply will continue to outstrip demand, which will not increase by more than 4 to 5 per cent in the next two years. This will mean that the carriers will need to attract the additional volumes needed to fill their assets, and this is usually achieved by aggressive pricing in a commoditised industry.

"It only takes one or two itchy fingers to drop rates, and unless you are prepared to lose market share, the rest follow, eventually."

A new price war is brewing

For sure, sea freight rates - a key bellwether for sentiment in the market - have perked up in a significant way this year compared with 2016.

This improvement came about after Hanjin filed for bankruptcy in August 2016, putting a halt to an aggressive price war that had broken out. Shippers were forced to switch to carriers that could provide service reliability, and this allowed players to charge higher rates, Mr Chiang explained.

He said the shipping alliances that came into effect in April also helped to sustain freight rates, as shippers now have fewer shipping options.

But weakness in freight rates will likely set in over the course of next year. In a market that is still plagued by a capacity glut, carriers will "jostle for market share", says Alphaliner executive consultant Tan Hua Joo.

The rate-cutting, in fact, has already begun. The Shanghai Containerised Freight Index, a composite index of spot freight rates on multiple trade lanes from Shanghai, has slid to its lowest since the Hanjin bankruptcy. Spot rates from Shanghai to Los Angeles, for example, is now US$1,078 per forty foot container, compared to $2,211 in January.

"Cosco, in particular, is expected to move aggressively to increase their market share as their operational capacity will increase from the 1.8 million TEUs currently to three million TEUs by the end of 2018," Mr Tan said, noting that its enlarged capacity will come from the merger with Orient Overseas Container Line and new ships it is scheduled to receive.

That said, this time round, freight rates may not sink back to the record lows seen in early 2016.

Nilesh Tiwary, equity analyst at Drewry Maritime Financial Research, said: "We expect the factors that supported the rate increases of 2017 to continue in 2018 - a return of higher trade volume growth and a further increase in fuel prices, triggering higher fuel surcharges, among others."

A long-awaited recovery is indeed in place, albeit more sluggish than expected. "We expect 2018 to be somewhat comparable to 2017 in terms of profitability, instead of being the banner year we had anticipated earlier."

Mr Tiwary added that Drewry is tempering its bullish view on the industry now, even as it retains a positive bias for the longer term. "There are chances that carriers may not fully realise the benefits in 2018 due to pricing ill-discipline and a desire to protect market share. As a result, 'paradise' may be pushed back further away than we previously thought."

Meanwhile, the major lines themselves have a much more buoyant outlook.

Vincent Clerc, chief operating officer of Maersk Line, the top container shipping company worldwide, said in an interview with BT just last week that the order book for the industry as a whole today is "at the lowest it has been for a long time", adding that fundamentals look "quite favourable" for the years to come.

Separately, CMA CGM chairman and chief executive Rodolphe Saade voiced similar sentiments. "Now that consolidation has played an important role by taking out the small- to medium-sized companies and making the others stronger and more profitable, I believe the industry is sound," he said.

"I believe that we should be heading towards better days."

Amid the slew of changes that continue to sweep the broader industry, the Singapore port has held steady to emerge as a winner among transshipment hubs in the region so far this year.

Box traffic here amounted to 27.7 million TEUs in the first 10 months of 2017, up 8.5 per cent from the same period a year ago, as a result of the major reshuffling in alliances.

Both CMA CGM and Cosco have moved a large chunk of their volumes from Malaysia's Port Klang to Singapore, notes Alphaliner's Mr Tan, who expects total container throughput here to hit 33.5 million TEU this year, topping the 30.9 million TEU in 2016. Port Klang's throughput, on the other hand, is forecast to fall to 11.7 million TEU from 13.2 million TEU last year.

"PSA will need to protect its market share gains in 2018, especially since Port Klang will try to regain part of its lost volumes by targeting some of PSA's existing customers," he says.

Drewry lead ports analyst Victor Wai says the growth in volumes here is unlikely to persist at the same rate in 2018, now that the alliances are set to stay intact for the next few years.

He added that the Port of Singapore faces another risk: direct calls, which bypasses the need for transshipment.

"An alliance can better allocate slot capacity, freeing up some vessels that would otherwise be under-deployed. Instead of laying up these vessels, they may be used to string direct services without the need for international transshipment," notes Mr Wai.

The expansion of gateway ports in the region - including Kalibaru Port in Jakarta, Laem Chabang in Thailand, Manila in the Philippines, and Hai Phong in Vietnam - means they are now better equipped to serve direct calls.

"With a pick-up in trade between these Asean countries and the rest of the world, it may be more commercially viable to make direct calls at these ports," says Mr Wai.

"Assuming the productivity and competitiveness of tariffs improve in these ports, Singapore may find it hard to compete when the containerised trade volumes between these Asean countries and the rest of the world expand. From a shipping line perspective, the network cost of making a direct call might then be lower than using a transshipment hub."

THE trustee of AIMS Apac Reit (AA Reit) on Aug 7 entered into a put and call option agreement with Titan (Wenya) to...

FORECASTS for trade growth in 2020 have been adjusted for the third time, this time with Singapore's non-oil...

MINORITY shareholder Serene Tiong has lodged an appeal after the Singapore High Court dismissed her application to...

[SEOUL] South Korean exports suffered a major decline in the first 10 days of August, as the coronavirus crisis...