Samuel Eesamuelee@sph.com.sg
The number of new cars put on the road last year surged by more than half from 2015, with the top four brands now being Japanese.
ST PHOTO

THE number of new cars put on the road last year surged by more than half from 2015, with the top four brands now being Japanese.

Thanks to an expanded certificate of entitlement (COE) quota, there were a total of 87,504 registrations last year, up 52 per cent from 57,589 in 2015, said the Land Transport Authority.

But the lineup of top three brands differed from that in 2015.

Honda took over as Singapore's favourite car brand from the second half of last year, followed by Toyota, which had ruled the roost in 2015 and 2014.

In the car business, the real investing comes after the selling

At No. 3 was Mazda, which displaced Nissan.

Mercedes-Benz, once Singapore's fourth most popular make, is now No. 5, thus giving Japanese car-makers a sweep of the top four spots.

But unlike in previous years, where Toyota led the runner-up by a big margin, Honda managed only a slim lead last year. Its total of 19,349 passenger cars (see table) was only 858 units more than second-placed Toyota. 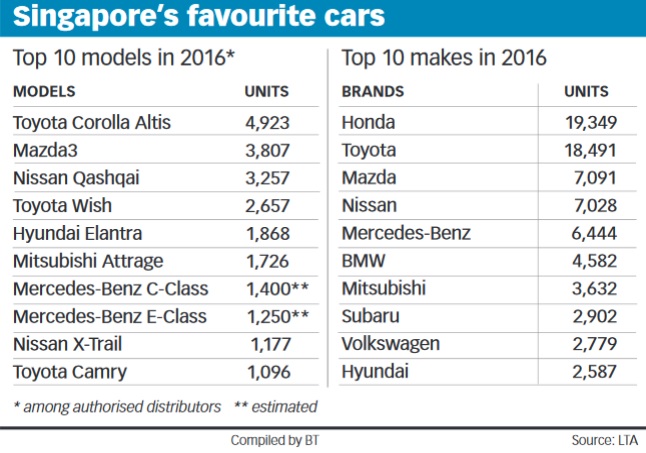 The registration numbers included parallel-import models, which are not sold by authorised distributors.

Elsewhere down the Top 10 were the same brands as in the year before, except that Volkswagen overtook Hyundai in Q4 2016 to move up one place to No. 9.

The Hyundai tally, of course, does not include taxis, which authorised Hyundai distributor Komoco sold 2,742 units of last year.

Outside the Top 10, Audi also advanced one place to No. 11, switching places with Kia, which closed last year in 12th place.

As in 2015, the Mazda3 and Nissan Qashqai were in second and third places respectively. Also similar to 2015 was that the only luxury models in the Top 10 were two Mercedes-Benz saloons - the compact C-Class and the mid-sized E-Class. Between the two, the E-Class is usually sold in higher numbers, but a full model change in 2016 affected its availability.

A new entrant to the Top 10 was the Mitsubishi Attrage, with 1,726 units. The strong demand for this budget mini-sedan last year came from private-hire companies.

Also noteworthy was the return of the Toyota Camry (1,096) to the Top 10. The mid-sized sedan edged out the Nissan Sylphy compact sedan into 11th place in Q4 2016.