Pratt & Whitney and Boeing latest to let staff go in Singapore; firms struggle between shedding workforce and keeping pool of skilled workers
Nisha Ramchandaninishar@sph.com.sg@Nisha_BT
Fiona Lamfiolam@sph.com.sg@FionaLamBT
Engine maker Pratt & Whitney (P&W) and plane-maker Boeing are the latest among the aerospace firms which have cut jobs in Singapore, with some analysts saying that the aerospace sector may need to brace for more pain if the pandemic drags on.
ST PHOTO: DESMOND WEE

ENGINE maker Pratt & Whitney (P&W) and plane-maker Boeing are the latest among the aerospace firms which have cut jobs in Singapore, with some analysts saying that the aerospace sector may need to brace for more pain if the pandemic drags on.

P&W on Monday carried out a retrenchment exercise at most of its sites across Singapore which affected nearly 20 per cent of its headcount, while plane-maker Boeing recently let go of some employees. A few positions in Singapore were impacted, said Boeing, without revealing numbers.

Other companies in the aerospace and aviation ecosystem which have recently shed jobs here include European plane-maker Airbus, engine-maker Rolls Royce and budget airline Jetstar Asia.

The layoffs were "openly communicated in advance with employees", P&W said in a joint statement with the Singapore Industrial and Services Employees' Union (SISEU) on Monday, adding that the layoffs will affect more foreigners than locals. The "Singapore core" will continue to form more than 77 per cent of the workforce after the exercise. The group employs more than 2,000 staff here.

With demand for aircraft and services cratering in the wake of the pandemic, Boeing has had to slash jet production rates and has announced it will cull some 16,000 roles worldwide or about 10 per cent of its global workforce.

A number of retrenchments has been carried out in Singapore, spread across Boeing's local operations and its supporting functions here. 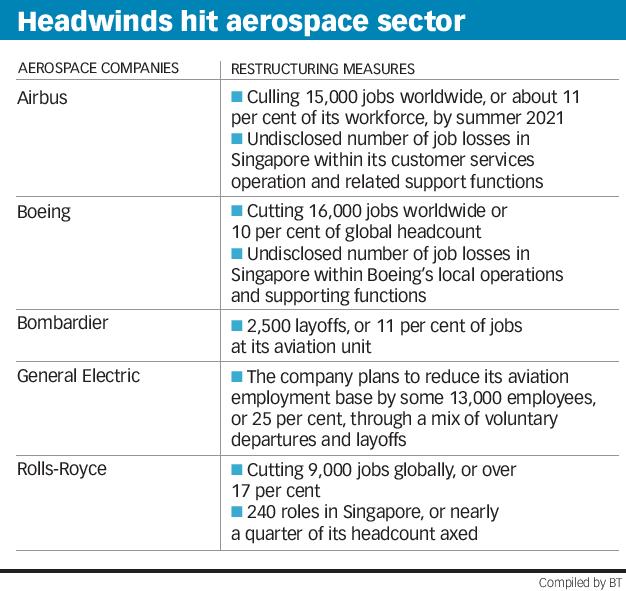 "The number of Singapore positions impacted by the reductions are few," said a spokesperson for Boeing in response to queries from The Business Times. "While the number is relatively small when compared to the number of job losses in the US - more than 15 per cent across Boeing Commercial Airplanes - and elsewhere in the world, this remains a difficult decision for the local team."

The US planemaker employs over 300 people in Singapore across different units, which includes its corporate office, pilot training centre and parts distribution business.

Affected employees will be supported with career transition services by HR consultancy Lee Hecht Harrison and can continue to seek assistance via Boeing's Employee Assistance Programme, it said.

With the pandemic still ongoing and a resurgence of cases emerging in countries such as Australia and the United States, firms are turning cautious, said Terence Fan, Assistant Prof (strategic management) at Singapore Management University.

"I think (companies) are trying to hunker down and lower the burn rate as much as possible (in the) hope that they will have enough cash to outlast this crisis," said Prof Fan. "We may see even more pain if this drags on or if the uncertainty continues."

Some companies may go the route of salary cuts instead of outright lay-offs or a combination of the two to mitigate the fall-out, he added.

Janesh Janardhanan, senior director (aerospace & defense), at Frost & Sullivan, said companies have to pull off a balancing act of shedding workforce and rationalising costs to match current revenues, while trying to maintain their pool of skilled workers, such as those in manufacturing and maintenance, repair and overhaul (MRO).

"Depending on how long the whole situation continues, there could be further adjustments," said Mr Janardhanan, adding however, that a vaccine could help revive sentiment and deliver a quicker rebound.

While the crisis has been a major setback for aerospace in Singapore, Mr Janardhanan suggested the Republic may be better-positioned to weather the storm than the global aerospace industry. Pointing out that Singapore has in the past catered adeptly to industry needs, he said: "Singapore's great strength has always been the speed and efficiency at which it responds."

Prof Fan said companies should be creative and consider deploying their talent in different or adjacent industries. "If they're (aerospace) engineers, think of them as engineers. We need to think about capabilities."

Where investments might be required at the company level, state support in the form of targeted initiatives could help, he added.

P&W's announcement on Monday came days after NTUC and three other unions publicly censured a separate round of "unfair" layoffs that affected more than a hundred workers at Eagle Services Asia, P&W's majority-owned joint venture with SIA Engineering. The under-20 per cent figure disclosed on Monday includes Eagle's axed staff.

Eagle had prematurely told 144 employees on July 22 and 24 that they may be retrenched, even though negotiations were still ongoing with the Air Transport Executive Staff Union, the SIA Engineering Company Engineers and Executives Union, and the Singapore Airlines Staff Union. Eagle employs about 800 workers.

On Monday, P&W said its companies had notified SISEU in early July of their intention to carry out a retrenchment exercise. Since then, the union has been working closely with the group, said Sylvia Choo, SISEU executive secretary. Overall, the latest exercise was carried out "smoothly", Ms Choo told BT.

The union and the companies have together ensured that the entire process was done in a fair and transparent manner, and that affected employees are treated with dignity and respect, she added.

SISEU and the National Trades Union Congress' (NTUC) Employment and Employability Institute will arrange for those affected to attend job fairs and employability workshops.

SISEU had asked the firms to provide retrenched staff with a one-off training grant, on top of the retrenchment packages. P&W will continue to support course-related expenses for all affected staff on its Employee Scholar Programme for 12 months after they leave.

Those affected will get paid NTUC union memberships till the end of this year if they are union members, so that they can continue to access membership benefits such as bursary awards, financial relief, insurance coverage as well as personal development and training assistance.

P&W said it resorted to layoffs after it had implemented other cost-saving measures such as temporary pay cuts and shorter work weeks, cancellation of merit increases, hiring freezes and discretionary spending cuts.

US details up to US$14b in new aid for farmers

[CHICAGO] The US Agriculture Department (USDA) on Friday released details of a second round of Covid-19 aid for...

OUE C-Reit's manager said late on Friday that it has not entered any exclusivity arrangement in relation to a sale...

[BRUSSELS] The European Union (EU) wants to raise more money to shore up its supplies of potential Covid-19 vaccines...