Mercedes-Benz remains the most popular luxury brand
Samuel Eesamuelee@sph.com.sg
Infiniti (pictured) and Jaguar were the two best luxury performers as total car registrations in 2016 rose 52 per cent to 87,504. Both brands are represented by Wearnes Automotive.
PHOTO: AFP

ONLY two mass luxury car brands came closest to keeping pace with the general car market in 2016, with the rest of the higher-end segment lagging due to the economic slowdown.

Infiniti and Jaguar were the two best luxury performers as total car registrations in 2016 rose 52 per cent to 87,504. Both brands are represented by Wearnes Automotive.

Infiniti, the luxury division of Nissan, posted a 47.7 per cent surge to 328 units, according to data by the Land Transport Authority (see table).

The growth came from continuing steady demand for two core models - the Q50 mid-sized sedan, and the Q30 compact hatchback which arrived in late Q3.

Luxury stores test the water in a Paris devoid of tourists

Gina Tan, Wearnes Automotive's general manager for Infiniti said: "The launch of the all-new Q30 also saw an expansion of our model line-up and range offerings. We were finally able to fulfil the premium active compact gap which we lacked before.''

Since Wearnes re-introduced the brand in Singapore five years ago, Infiniti has grown more than four-fold from 72 units in 2012. 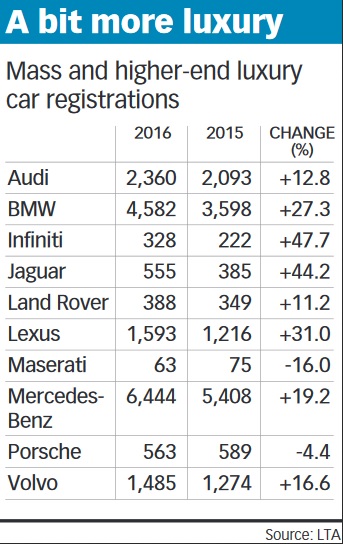 "Both are in segments we have never competed before,'' he said.

The rest of the luxury car market did enjoy growth, though not as much as Infiniti and Jaguar

But in terms of numbers Mercedes-Benz continued to be Singapore's most popular luxury brand - its 6,444 units registered in 2016 represented a 19.2 per cent rise.

On the downside, only Porsche and Maserati suffered negative growth - however, this is because LTA data includes both official and parallel imports; authorised Porsche distributor Stuttgart Auto in the meantime said its 2016 numbers actually rose 4.5 per cent to 556 units.

"We increased our sales and effectively controlled the population of parallel imports because of our attractive prices and aftersales,'' said Jason Lim, general manager for sales at Stuttgart Auto, which is part of the Eurokars Group.

Porsche, along with Mercedes-Benz and BMW, is usually a favourite target of parallel importers.

"Based on the current market situation, we are quite happy with the results,'' said Mr Lim, who added that the Macan compact SUV accounted for about 60 per cent of sales.

"The slowdown did not affect us as badly as other luxury sports car competitors.''

[PARIS] The French government is expected to announce Thursday new measures to ease the coronavirus lockdown,...

THE Singapore Nightlife Business Association (SNBA), which represents over 300 businesses, has thrown its weight...

WeWork board factions head for clash over new directors

[DELAWARE] WeWork's board is scheduled to vote on appointing two new directors on Friday, a critical step in a clash...