PROPERTY analysts said the 0.7 per cent quarter-on-quarter increase in the official private home price index for the third quarter is a reflection of firmer prices in the last 21/2 weeks of September.

The figure beat the 0.5 per cent increase in the flash estimate.

"With private home price indices in all segments in positive territory, the price recovery appears to be broad-based, supporting the likelihood of prices continuing to rise," said Ong Teck Hui, national director of research and consultancy at JLL.

Cushman & Wakefield Singapore's research director Christine Li, said that the renewed interest in en bloc sales has encouraged more home owners to withdraw their units from the resale market in a bid to jump on the collective sale bandwagon.

The private residential market has gone "from having too many units for sale at the end of last year to not having enough units to sell".

Developers, too, have been running short of units for sale, she said, pointing to the trend in the ratio of private homes sold by developers to the units launched.

The ratio for Q3 is the highest seen for a quarter in the past 10 years and an indication that developers are selling units faster than they can replenish them.

In the first nine months, developers have moved 8,702 private homes in the primary market, up 53.9 per cent year on year. 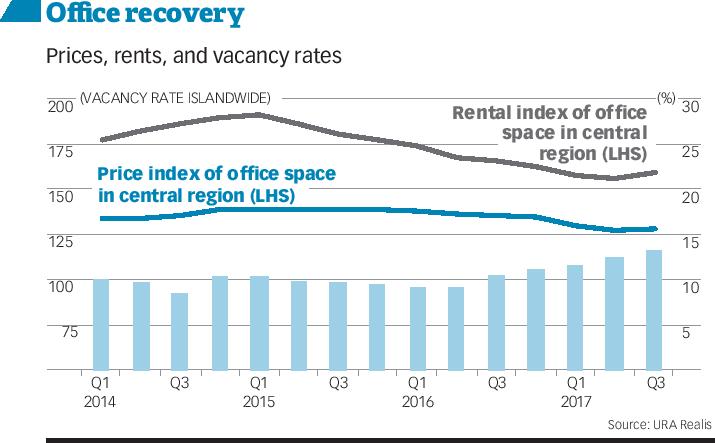 Said JLL's Mr Ong: "New sales launches have been lagging take-up with 5,143 units placed on the market in the first nine months, a mere 4.3 per cent increase y-o-y."

"With new launches remaining low-key and more buyers returning to the market, resale market activity is expected to strengthen and lead the primary market in the near term," said Mr Ong.

Given that some developers are likely to delay sales launches to make the most of the price recovery, Mr Ong has revised his forecast of new private home sales in the primary market in 2017 to 10,500-11,500 units from around 12,000 units previously.

In the first nine months, 18,800 private homes were transacted across the primary and secondary markets - 56.8 per cent higher than the same period last year, and the strongest first nine months in five years, according to JLL's analysis of URA data.

The 0.7 per cent q-o-q rise in URA's private home price index comes after 15 consecutive quarterly declines since the peak in Q3 2013.

Prices of non-landed properties increased 0.6 per cent after dipping 0.1 per cent.

The subindex for suburban areas or Outside Central Region (OCR) was up 0.8 per cent, against a 0.3 per cent fall in the previous quarter.

Non-landed private homes in the city fringe or Rest of Central Region (RCR) climbed 0.5 per cent, following a 0.6 per cent increase in the previous quarter.

In the prime areas or Core Central Region (CCR), prices rose 0.1 per cent against a 0.5 per cent drop the previous quarter.

Most property consultants are expecting URA's benchmark overall private home price index to end the year in positive territory by up to 1 per cent, contrasting with a 3.1 per cent drop last year.

ZACD Group executive director Nicholas Mak expects the index to end the year 0.7 per cent to 1.5 per cent higher, and grow by another 4 per cent to 8 per cent next year.

URA's rental index for private homes remained unchanged, compared with a 0.2 per cent decline in the previous quarter.

Still, he said: "a recovery in the rental market could possibly happen as soon as 2018, as the number of private home completions is expected to be 7,893 units; this is less than half the 17,000-odd expected completions in 2017".

Savills Singapore research head Alan Cheong said: "A rental base appears to be forming despite rising vacancies. This could be due to landlords pushing back against tenants seeking even lower rents.

"The low interest rate charged for mortgages in Singapore, which at today's rates is even lower than before the Fed started to hike rates in December 2015, is strengthening landlords' holding power."

Virgin Australia in talks with government about support for airline industry

[SYDNEY] Virgin Australia Holdings said on Tuesday it was in talks with the government about support needed for the...

[LOS ANGELES] Walt Disney Co. chairman Bob Iger will give up his salary, and other executives will take cuts in pay...

[WASHINGTON] The head of the US Securities and Exchange Commission said on Monday that it should not ban short-...

LOGISTICS startup Inteluck has raised more than US$5 million in a pre-Series B round led by Hong Kong-based venture...