Fiona Lamfiolam@sph.com.sg@FionaLamBT
SIA’s budget carrier Scoot on Wednesday announced it has cancelled all its flights between Singapore and Wuhan until the end of March. On the same day, low-cost carrier Jetstar Asia also suspended flights to three Chinese cities – Hefei, Guiyang and Xuzhou – until March 31.
PHOTO: EPA-EFE

MUCH like in the Sars (severe acute respiratory syndrome) outbreak in 2003, airlines now face risks from the global spread of the Wuhan coronavirus, S&P Global Ratings said in a report on Thursday.

However, the International Air Transport Association (Iata) noted in a separate report that the industry has proven resilient to shocks in the past, and thus any impact will not be long-drawn.

S&P analysts Philip Baggaley and Rachel Gerrish wrote: “Air traffic, revenue and earnings dropped steeply in selected regions and with certain airlines during the Sars outbreak. We see the potential for a similar effect from the (latest) coronavirus outbreak.”

At the height of the Sars epidemic in May 2003, airlines in the Asia-Pacific (APAC) region saw a 35 per cent plunge in monthly revenue passenger kilometres (RPKs) compared to their pre-crisis levels, according to Iata’s report published last week. RPKs are a measure of the volume of passengers carried by an airline.

For 2003 as a whole, APAC airlines lost a total of 8 per cent of their annual RPKs and US$6 billion in revenues because of reduced business and leisure travel to, from and within the region.

Singapore Airlines (SIA), Hong Kong’s Cathay Pacific, Japan Airlines and ANA Holdings were among those which reported a financial loss during that period.

This time around, significant routes in China and the APAC region will be the most affected by the Wuhan virus spread, according to S&P.

An additional 450 million passengers now fly to, from and within China each year, compared to a decade ago. The timing of the latest outbreak also coincides with the Chinese New Year celebrations and the country’s busiest travel season.

“But most airlines we rate only have a moderate exposure to traffic to, from and within China,” the ratings agency added.

Many airlines are already responding with flight suspensions and cancellations.

SIA’s budget carrier Scoot on Wednesday announced it has cancelled all its flights between Singapore and Wuhan until the end of March. On the same day, low-cost carrier Jetstar Asia also suspended flights to three Chinese cities – Hefei, Guiyang and Xuzhou – until March 31.

Cathay Pacific said it would cut capacity to China by 50 per cent or more starting Thursday.

Other airlines in the region, including Korean Air Lines, Taiwan’s China Airlines and Japan’s ANA have also cancelled flights in and out of Wuhan after the authorities announced a lockdown. Indonesian airline Lion Air Group will suspend all flights to China from February.

“While there are risks that this outbreak could cause a sizeable disruption, history indicates that any effect on air transport would be temporary,” Iata said. 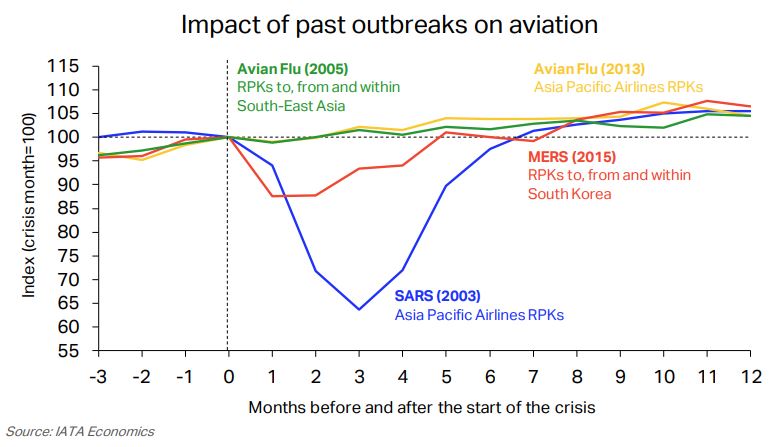 The association described Sars as the “most serious epidemic” that has affected air traffic volumes. On the other hand, the avian flu episodes in 2005 and 2013 had a “much milder” and short-lived impact, Iata noted. Air travel rebounded quickly in those instances as the fears of global spread of the avian flu virus eased.

Most recently, for Mers (Middle East respiratory syndrome) – which was focused more on a single country – the initial impact was a sharp slowdown, Iata said. In the first month of the outbreak, monthly RPKs to, from and within South Korea fell by 12 per cent. However, air travel volumes began to recover after two months, and returned to pre-outbreak levels within six months.

“Even in the Sars outbreak, monthly international passenger traffic returned to its pre-crisis level within nine months,” Iata added.

The airline industry has thus shown resilience to shocks, including pandemics, Iata said.

As for aircraft leasing companies, S&P on Thursday said that they are “relatively well prepared” for the latest coronavirus outbreak, even though many of them have significant exposure to China and play a greater role now than in the early 2000s.

The death rate from the Wuhan virus is currently about 2 per cent compared to around 10 per cent during the Sars epidemic, though the virus has sickened more people than Sars. Studies on how quickly it spreads remain inconclusive, with a commonly used measure - known as the basic reproduction number - being difficult to calculate. The virus was first reported as a string of pneumonia-like cases in Wuhan in December, before the World Health Organization identified it in early January as a new strain of coronavirus. It has since spread to markets including Singapore, Malaysia, Taiwan, France, South Korea and Canada.

Fixing safe bubbles is harder than it seems

China plans to extend curbs on international flights until June 30: US embassy

[BRUSSELS] European trade commissioner Phil Hogan is considering putting his name forward as a candidate to be the...

[BANGKOK] Thailand's parliament approved on Sunday a near US$60 billion stimulus package, the kingdom's biggest-ever...

Employers must agree to 2 conditions to get foreign worker levy waivers, rebates: MOM

EMPLOYERS will have to agree to let the Ministry of Manpower (MOM) move their foreign workers who are cleared of...

[SINGAPORE] Singapore has agreed to further suspend the High-Speed Rail (HSR) project that would link it with Kuala...