DoctorxDentist may have redirected patient leads to favour own clients

DoctorxDentist may have redirected patient leads to favour own clients

How the DxD saga unfolded

SOME questionable practices by executives behind the DoctorxDentist website have emerged, including uneven treatment pertaining to doctor recommendations and how they solicit patient reviews.

The controversial healthcare website seems to have been quietly prioritising the doctors who pay to use its platform by sending more patient enquiries to them, going by internal communications seen by The Business Times.

Prioritising certain doctors for commercial gain could put the startup at odds with a 2016 advisory from the Singapore Medical Council (SMC) about fee payments to third parties. The advisory pointed out that patients should be referred to medical practitioners because it is in the patient's best interest, and that the recommendations should be based on the doctors' expertise and reputation, not because the doctors paid for the referrals.

Yet, DoctorxDentist's activities fall within a grey area. Partner doctors on the platform do not pay directly for patient leads; and they are not necessarily aware of the company's practices, BT understands from sources close to the company.

In November, over 1,500 medical practitioners protested against being listed on the website.

Many feared being associated with a platform that, with its reviews feature and lack of transparency, could go against their code of ethics.

Third-party platforms are not regulated directly by the Ministry of Health (MOH) or the SMC. Rather, the ministry and council regulate licensed healthcare professionals and what commercial contracts they can enter into, meaning DoctorxDentist may not have officially run afoul of any rules.

This is despite the startup appearing to have prioritised directing general patient enquiries to newly signed-up doctors or those with expiring contracts over thousands of non-paying doctors listed on its platform. In one instance, staff were instructed by management to withhold patient enquiries from a doctor who had not been making payment, and to channel these queries to other paying doctors in the same speciality, internal communications from the past two years showed.

The company sells subscription packages that boost a doctor's presence on the Internet through content optimised for Google Search.

Search engine optimisation (SEO) subscription plans lock doctors in for a six-month period. They cost from S$3,000 to S$5,500 a month, according to a sales deck seen by BT in November.

The plans include services such as SEO for the doctor's website, boosting of the doctor's DoctorxDentist profile through reviews and Q&A articles, video content generation and a dedicated virtual concierge.

When a website visitor clicks through to the concierge service via an article, the concierge recommends the doctor who authored the article, one source told BT. If the patient rejects the doctor, another paying doctor is recommended.

Under Singapore's Personal Data Protection Act, organisations are required to inform individuals of the purposes for which their data will be collected and used.

The startup in November faced a backlash from the medical community, industry bodies and regulators for refusing to remove profile listings and reviews of doctors on its platform.

Following threats of legal action and warnings to doctors by regulators against using such platforms, it delisted about 9,700 doctors.

DoctorxDentist ceased publishing reviews last Nov 25, but it used to "harvest" reviews for its doctor clients, BT has found. Its employees leave hard-copy forms at the reception of the clinics of paying doctors, so that patients who want to offer a review may fill these up. These forms - one of which was seen by BT - are sent back to DoctorxDentist for the content to be published on the Web site, said sources. A patient is deemed to have given consent for the review to be published by filling up the form.

Ms Ding confirmed that this practice existed, but claimed that DoctorxDentist dropped off these hard-copy review forms at non-paying clinics as well.

SMC guidelines forbid doctors from using patient testimonials in advertising or any media where they have control over the content about themselves. Doctors must not ask or induce anyone to write positive testimonials about them in any media.

A link on DoctorxDentist's Instagram page, last seen by BT on Nov 17, 2020, led to a "rewards programme" that incentivises patients to leave reviews for doctors. Patients who leave reviews for doctors stood to receive cash vouchers, gifts and complimentary treatments. The more reviews patients wrote, the higher the value of rewards they would get, it promised. However, it is unclear whether any patients or clinics took part in the programme.

Ms Ding said the rewards programme, which was in its infancy, was discontinued two months ago to prioritise other projects.

Under the private hospitals and medical clinics (PHMC) (Advertisement) Regulations 2019, a licensee of a healthcare institution must not advertise any programme under which a gift (whether in the form of a good or service) or other benefit may be obtained by a patient.

Asked whether he thought the rewards programme was therefore contentious, Mr Hahner said the PHMC regulations do not apply to the company since it is not licensed.

While regulatory data showed that DoctorxDentist's sole director and shareholder is an individual named Rose Chen Ah Keow, internal exchanges seen by BT showed that a doctor named Ethan Goh Zhong Min had been involved in the platform's activities since it was a non-commercial blog in 2016.

Dr Goh is currently a practising physician in a SingHealth polyclinic in Bukit Merah, according to SMC's online directory. He appeared to have given his inputs in setting DoctorxDentist's strategy and monetisation methods. In a personal social media post in November 2014, he referred to Rose Chen as his mother.

It is unclear whether he is paid by the company. One source called Dr Goh "a high-ranking manager in all but name".

Mr Hahner said Dr Goh is not involved in DoctorxDentist. "The only people involved in the company are me, Tyr and our staff."

Dr Goh told BT that his last formal involvement with the startup was as a voluntary contributing writer four years ago, when it was a non-commercial patient education blog. He said he stopped contributing in 2017, before joining SingHealth full time.

"As I have an interest in health and education, I continue to occasionally provide advice to not-for-profit associations and social enterprises, including DoctorxDentist, on a non-obligatory and unpaid basis during my free time. This has always been strictly in my personal capacity," he added. 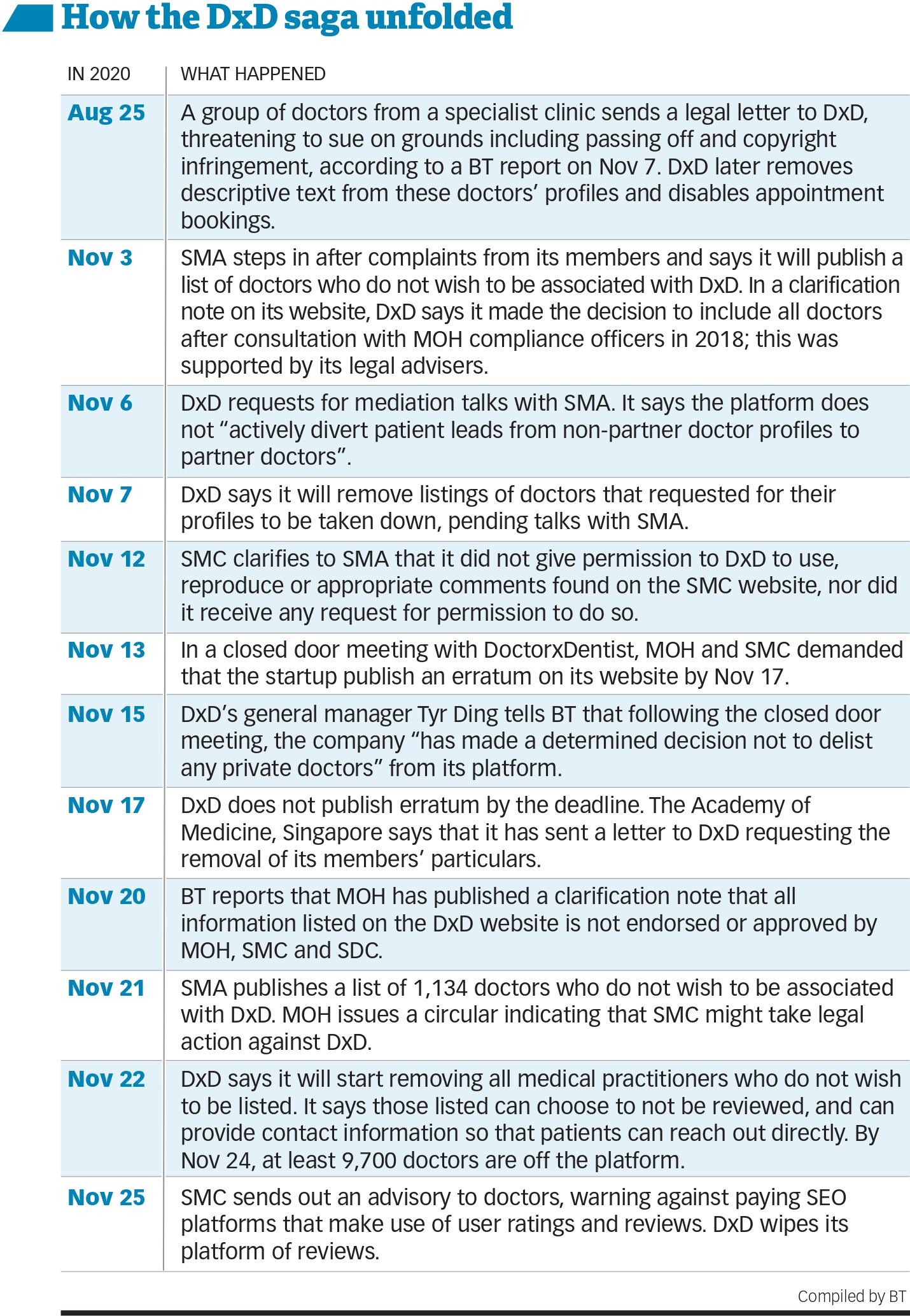 FOREIGN investor interest in Indonesia's red-hot digital economy is unlikely to be impacted by the latest...

[LONDON] Manchester United's bid to win the Premier League for the first time in eight years will face a major test...

Xiaomi dives 11% in Hong Kong after US blacklisting

Venture capital hits record high in US in 2020 despite pandemic