SGX Real Estate Developers and Operators Index clocks 17.9% return YTD, in turn higher than STI's 13.3%
Lynette Khoo
The shares of real estate developers and operators have outperformed the broader market on the back of a recovery in the residential market.
PHOTO: ST FILE

THE shares of real estate developers and operators have outperformed the broader market on the back of a recovery in the residential market.

The SGX Real Estate Developers and Operators Index, which has 16 constituents with a combined market capitalisation of S$79.5 billion, has recorded total returns of 17.9 per cent in the year to date, higher than the benchmark Straits Times Index's 13.3 per cent.

Five real estate developer stocks in the STI, which make up 15 per cent of the STI weights, have enjoyed a 21.5 per cent gain so far this year.

SGX said in a market update on Monday: "Cyclical growth outlooks, interest rates and risk appetite for property have made sectoral impacts at home and across the region."

The majority of these strong returns of the five real estate developers and operators occurred earlier in the year, amid the global rotation out of the emerging markets, and the Singapore government's announcing of the easing of property market cooling measures on March 10.

The cooling measures, which have been in place since 2013, coincided with 14 consecutive quarters of price decline in Singapore's private residential market, the longest decline since 2004.

Among changes made in March, the government shortened the seller's stamp duty (SSD) holding period for homes bought from March 11 to three years instead of four, and also cut rates for each tier by four percentage points.

The run-up in developers' counters has narrowed their valuation gap with real estate investment trusts (Reits) in the past year, though the average price-to-book (P/B) ratio of the five real estate developers and operators remains below the long-term five-year average.

Deutsche Bank on May 12 reiterated its preference for developers over Reits, given the valuation gap and developers' ability to realise revalued net asset value (RNAV) over the Reits. "We argue that in a RNAV upgrading cycle, developers should be trading at a higher P/B multiple versus the S-Reits."

On Monday though, Hongkong Land Holdings corrected by 3.7 per cent to US$7.31, following another round of tightening by the Hong Kong Monetary Authority on mortgage lending to cool a mortgage war among banks there.

Nomura on Monday recommended a switch to landlords and staying selective on developers, with a "neutral" call on Hongkong Land.

The Hong Kong developer owns Singapore residential developer MCL Land, which has been moving unsold inventory amid a transactions recovery in the market; it will soon launch a new condominium project in Margaret Drive.

Other Singapore developer stocks without Hong Kong residential exposure also slipped amid a broader correction on the Singapore bourse on Monday. 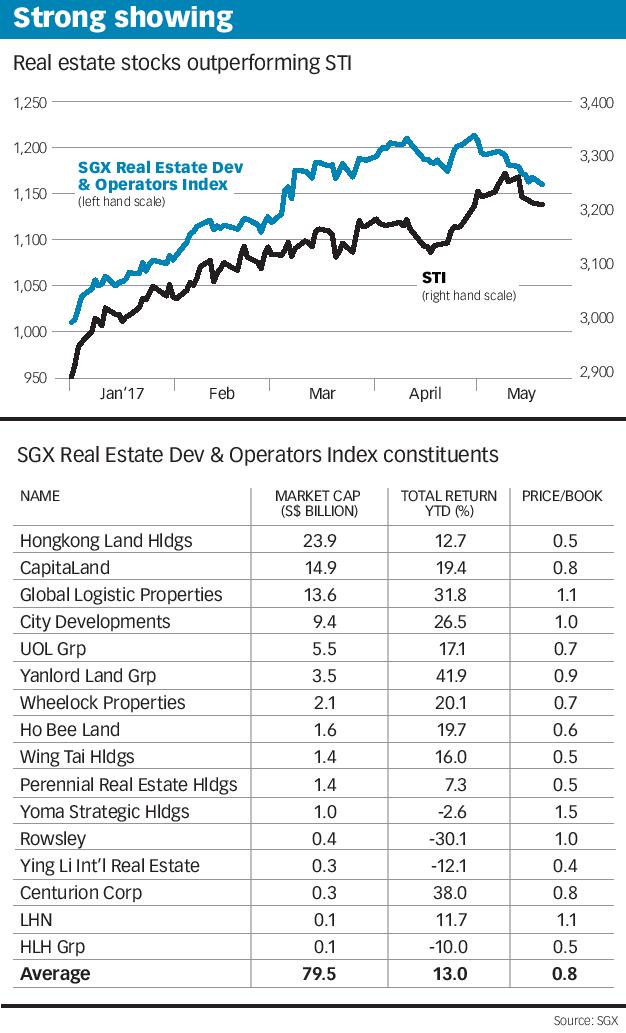 Despite GLP posting on Friday a record US$794 million net profit (a 10.4 per cent increase) for the financial year ended March 31, analysts (including those from OCBC and Deutsche Bank) maintained their "hold" calls on the stock. DBS Group Research downgraded its rating on this stock to "hold" from "buy", citing limited upside to its current target price of S$3.00.

For UOL Group, DBS Group Research kept its "buy" rating; it called it a "deep value play", and raised its target price to S$8.73 from S$7.64 previously. UOL had earlier this month reported a 4 per cent rise in first-quarter net profit to S$80.3 million.

DBS analysts said in a note on May 15: "The successful launches of recently purchased land sites in the enbloc market will be re-rating catalysts for the stock."

For CDL, Maybank Kim Eng maintained its "hold" call; OCBC Investment Research downgraded its rating to "hold" from "buy" on valuation grounds. CDL's first-quarter net profit of S$85.5 million - an 18.9 per cent drop from a year ago - was deemed below expectations, constituting only 13.6 per cent of OCBC's full-year forecast. RHB also recommended "take profit" from an earlier "buy" call, noting that the share price has factored in near-term positives.

CapitaLand, which reported its first-quarter results last month with a 77.2 per cent jump in net profit to S$386.8 million on the back of divestment gains, received a slew of "overweight" or "buy" calls from JPMorgan, Deutsche Bank, Citi and OCBC.

Daiwa Capital Markets, which reiterated its "outperform" rating for CapitaLand, also raised its target price to S$3.90 from S$3.82, as it lifted valuation assumptions for CapitaLand's shopping malls in China.

[BEIJING] China's factory activity expanded at a slightly slower pace in October but was slightly above analysts'...

[WASHINGTON] The group of Russian hackers accused of meddling in the 2016 US presidential election earlier this year...

[SAN FRANCISCO] A US federal judge on Friday issued an injunction temporarily blocking an executive order by...

Mercedes Benz A180 saloon review: A baby Benz for the star-struck