Firms urged to act now to be code-compliant by 2022. SID report shows some bright spots
Anita Gabrielanitag@sph.com.sg@AnitaGabrielBT
A recent scrutiny on the state of play in the board makeup of more than 700 listed companies in Singapore has thrown up some hits and misses.
PHOTO: ST FILE

A RECENT scrutiny on the state of play in the board makeup of more than 700 listed companies in Singapore has thrown up some hits and misses.

On the one hand, promise lies in the growing number of independent directors (IDs), which can beef up the effectiveness of boards. There are numbers to back this up, courtesy of the Singapore Directorship Report 2018 produced by the Singapore Institute of Directors (SID), which was released on Wednesday.

On the other, the changes to the Code of Corporate Governance and the listing rules announced in early August could still prove a hard slog for companies seeking to ready themselves to comply with the requirements, said Ho Yew Kee of the Singapore Institute of Technology (SIT).

The SID report, laying out the silver lining with its findings, notes that this year marks the first time that the number of IDs accounted for more than half the total number of board seats across firms listed on the mainboard, Catalist as well as real estate investment trusts (Reits).

The composition of IDs in business trusts, however, has remained stable at over 60 per cent since 2014.

The report also notes a "consistent growth" in the number of lead independent-director appointments: this rose from 304 in 2014 (when the SID report's first edition was published) to 432 this year.

SGX RegCo chairman Tan Cheng Han, in his keynote speech at the launch of the report, said: "These developments have struck me most positively."

The SID-organised event was attended by 300 participants.

SIT's Prof Ho, who is also a member of the Singapore Directorship report committee, offered a reality check. In referring to the major change in the code requiring IDs to comprise a majority of the board (up from "at least half" in the current code) for company boards with a non-independent chairman, he said: "The changes could create a tsunami for boards."

The changes take effect in January 2022. 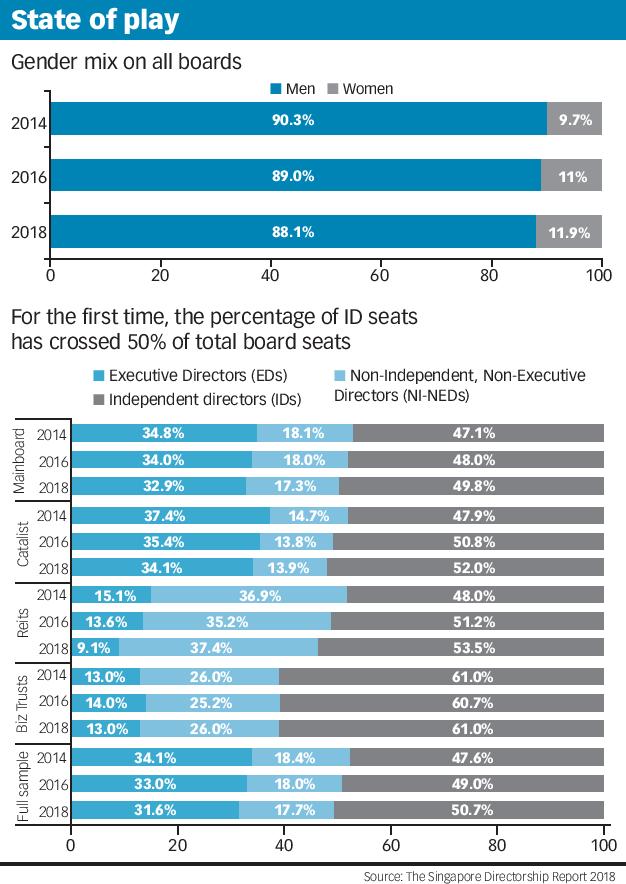 Of the 516 companies that will be hit by this requirement, 174 are already compliant. This means 342 companies will have to restructure their boards by appointing an independent chair or by raising the number of IDs to meet the new code provisions, the report notes.

Prof Ho said: "This means more than 50 per cent (66.3 per cent) are not (yet) in compliance. We thus anticipate a surge in the number of IDs being appointed. There is going to be a scramble."

Another key change is the introduction of the nine-year rule for IDs and the requirement that a two-tier shareholders' vote be held if directors are to continue as IDs beyond nine years.

"These companies have to start doing something about it right now, before 2022 - when it hits them in the face," Prof Ho added.

During a panel discussion on the findings of the report, June Sim, head of SGX RegCo's listing compliance, asked: "There are (long-serving individuals) who can continue to serve, but in a non-independent capacity. So, the redesignation could see boards becoming bigger. Is that a good outcome?"

She also described the low disclosure of directors' remuneration - only one in three companies reported on director salaries - as "anaemic".

Earlier, SGX RegCo's Prof Tan disclosed that the exchange was working with the Securities Investors Association (Singapore) and the Singapore Institute of Directors to come up with a guide to how directors and investors should conduct themselves during shareholder meetings here.

The best-practices guide will present a holistic view of each party's role and responsibilities at annual general meetings (AGMs) and other shareholder meetings; it aims to be different from existing guides or codes of conduct at AGMs and will not be "one-sided".

"It does neither management nor shareholders any good when relationships break down and mutual trust and confidence is lost."

The issue of shareholder and board conduct has become a hot topic since Stamford Land Corporation filed a defamation suit against shareholder Manohar Sabnani over statements he allegedly made during the group's 2016 and 2018 AGMs, and in publications after the latest AGM.

The SID produced the report with the support of the Accounting and Corporate Regulatory Authority (Acra) and the Singapore Exchange (SGX), in partnership with Deloitte, tech company Handshakes and Nanyang Technological University.

Bitcoin drops below US$30,000 in ominous sign for crypto rally

[HONG KONG] Bitcoin slumped below US$30,000 on Friday, extending a retreat from an all-time high set just two weeks...

[SYDNEY] The Australian dollar slipped on Friday after disappointing retail sales data for December though it was...