SOUTH-EAST Asia's largest bank DBS has flagged heightened macroeconomic uncertainty for the second half of the year, with its chief fretting over the spillover effects from the new wave of US-China trade tensions.

In slides to be presented to the media on Thursday morning, CEO Piyush Gupta is expected to say that while impact of the first wave of rising US-China trade tensions has been benign, the second phase is "uncertain".

"The spillover effects (are) concerning," the slides showed.

Regional headwinds to watch include the deleveraging moves out of China, as well as weakening Asian currencies. Closer to home, the bank also expects "some impact" on property loan growth, with the recently announced cooling measures for the Singapore property market. DBS has a Singapore housing loan market share of 31 per cent.

This comes as the bank reported an 18 per cent gain in net profit for the second quarter that missed estimates on the street, as stronger net interest income was offset in part by a fall in non-interest income on lower trading income.

Net profit for the three months ended June 30, 2018 stood at S$1.33 billion, compared to S$1.13 billion posted in the year-ago period, and was driven by higher net interest income and fee income. This translated to an annualised earnings per share of S$2.10, up from S$1.76.

The results missed estimates against a S$1.44 billion average forecast in a Bloomberg survey of six analysts. 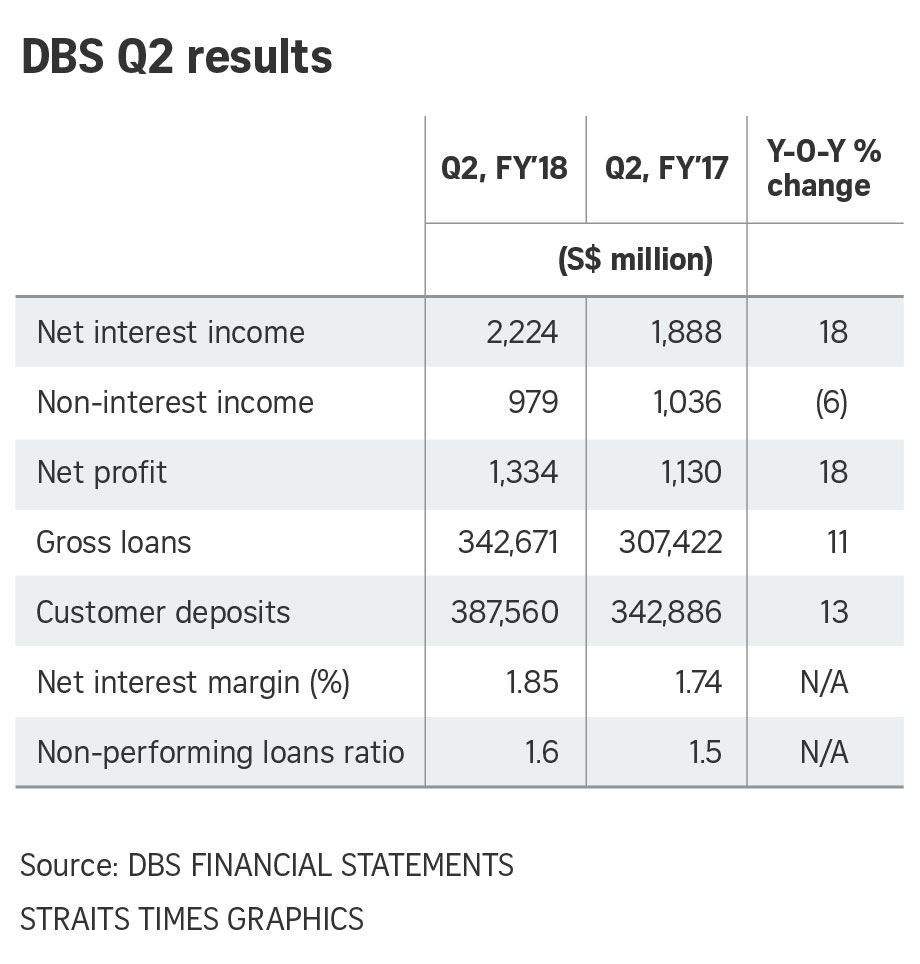 The bank has cut its loan growth outlook for 2018 to 6-7 per cent from 8 per cent, on the back of expectations of lower trade loans. But it expects a stronger NIM pick-up, bringing it higher by one to two basis points above previous guidance of 1.85 per cent for the full year.

Its non-performing loan ratio stood at 1.6 per cent, lifted from 1.5 per cent a year ago.

The bank also reported its lowest recorded income from treasury markets, with income from that segment for the second quarter dropping 59 per cent from a year ago to S$107 million. The bank said this was due to some "structural impact" from exchange trading and high frequency activities.

DBS expects to maintain a cost-to-income ratio of 43 per cent this year.

[DUBAI] World leaders voiced hope Friday that a historic deal between the UAE and Israel could kickstart moribund...

[BEIJING] China will make it easier for foreign investors to use the yuan to invest in Chinese bonds and stocks as...