Whizpace taps unused television broadcasting airwaves, known as TV white space, to transport data
Leila Laileilal@sph.com.sg@LeilaLaiBT
Founder and CEO Oh Ser Wah (left) and co-founder and CTO Pankaj Sharma. The startup is raising US$4 million in a Series A funding round to add to its team of 11 and continue its overseas expansion.
BT PHOTO: LIN ZHAOWEI

WITH everything from health records to parking coupons and cash going digital in Singapore's Smart Nation push, it may seem as though for every new technological advance, another old system is rendered obsolete.

But not everything analogue is destined for a slow and painful death. As it turns out, analogue TV could be reborn as "super WiFi", a wireless network robust enough to support the technology and data required to run a Smart Nation.

WiFi, the conventional wireless system, has several drawbacks in Smart Nation applications: it requires large pieces of equipment like base stations and antennae, the signals cannot traverse long distances or penetrate obstacles easily, and signal quality falls when networks are congested.

In contrast, TVWS technology is ideal for Smart Nation and Internet of Things (IoT) applications because it is more robust and asset-light, and can be used for more than just WiFi. Whizpace's small box-shaped devices automatically identify unused TV spectrum from existing broadcast towers, such as the channels between Channels 5 and 8 in Singapore, and hook onto it to transport data.

"This technology can reach over very long distances and penetrate through obstacles much better than WiFi, which is why it's called 'super WiFi'," said founder and CEO Oh Ser Wah.

"But it's not exactly the same as WiFi, because using TV white space, we can address many different applications, including IoT applications where we enable factories and agricultural plantations to be smart."

For instance, TVWS can be used to manage devices in factories full of WiFi blockers like metal equipment, as well as send signals from sensors and machines to data centres up to about 10 kilometres away.

In 2014, TVWS technology was installed to provide WiFi coverage at Gardens by the Bay, where ordinary WiFi infrastructure would have been an eyesore in the park's natural environment. Whizpace's devices are currently being used for public WiFi on school campuses, in facility management for buildings with multiple sensors, and on agricultural plantations and solar farms where strong connectivity is needed over a large area.

Whizpace also provides low-cost internet access to rural communities, as the cost of connecting a village wirelessly via the devices to an internet point in a nearby city is far less than laying a physical cable.

"We know that there are still more than three billion people who are not connected yet," said co-founder and chief technology officer Pankaj Sharma. "With our technology, it's much easier to connect them at a much lower cost, so the return on investment is very fast for the telcos that use it."

While it is still loss-making, revenue has been growing steadily, increasing by six times from its first to second financial year. Dr Oh and Mr Sharma hope to triple Whizpace's revenue in the coming year, and break even by mid-2019.

Most of its revenue comes from its Singapore operations, but the startup has a subsidiary in Suzhou, China, a franchisee in Myanmar and a joint IoT lab in India, which works on developing new IoT applications for the technology.

The startup is currently raising US$4 million in a Series A funding round to add to its team of 11 staff and continue its overseas expansion.

Whizpace does not have any direct competitors regionally, and although several firms in North America are also using TVWS to provide long-distance rural internet, they do not have the kind of IoT products that Whizpace has developed, said Dr Oh.

However, despite receiving recognition for the technology's potential in the form of numerous awards in local and overseas competitions, Whizpace faces an uphill battle in convincing potential clients to choose its innovative solution over traditional ones, as TVWS is still perceived as an unproven technology by some.

Manpower issues are another challenge, as local information and communication technology (ICT) professionals are in short supply, but Singapore's manpower restrictions limit the number of foreign employees Whizpace can hire.

"There is still a mismatch in the supply of manpower versus the demand in the industry, and even MNCs (multinational corporations) find it hard to hire ICT professionals," Dr Oh noted.

Going forward, Whizpace will explore new markets and new applications for its technology, and continue to improve the product and come up with new innovations.

Dr Oh sees a trade sale as a possibility in Whizpace's future, noting that wireless communication companies such as Huawei, Ericsson and Qualcomm often look to acquire smaller outfits with specialised capabilities to add to their range of offerings, once they see that there is sufficient demand for the technology.

"They could develop the tech on their own, but that will take some time, and the faster way for them is just to do an acquisition," he said. "Of course, we can choose not to sell, but then we'll need more resources and will have to really innovate to compete with those bigger boys when they come into the market." 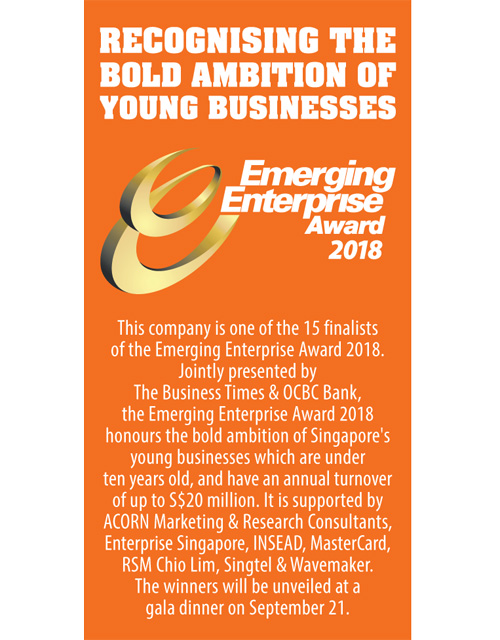