IPOs in Asia-Pacific resilient this year, but could slow down in 2020

Asia-Pacific accounts for seven of top 10 exchanges by deal numbers and five of top 10 by proceeds in 2019: EY report
Lee Meixianleemx@sph.com.sg@LeeMeixianBT
Geopolitical and trade tensions may have taken their toll on global listing activity, but initial public offerings (IPOs) in Asia-Pacific have remained quite resilient, EY said in a report released on Monday.
ST PHOTO: LIM YAOHUI

GEOPOLITICAL and trade tensions may have taken their toll on global listing activity, but initial public offerings (IPOs) in Asia-Pacific have remained quite resilient, EY said in a report released on Monday.

Year-on-year, the number of deals this year slipped 1 per cent to 668, while proceeds declined 8 per cent from 2018 to just under US$90 billion. While on a downtrend, this was juxtaposed against a steeper 19 per cent decline in deal volume globally to 1,115 IPOs, with proceeds of US$198 billion.

Deal volume activity was mainly driven by the mainland China and Hong Kong stock exchanges, due to the early success of Shanghai's Stock Exchange Science and Technology Innovation Board, called Star market in short. Greater China saw a 13 per cent increase in number of listings to 354, and a 28 per cent surge in proceeds raised to US$74 billion.

In Hong Kong, the IPO market recovered in Q4 2019 despite ongoing protests, as five mega IPOs and 53 other IPO candidates seized their windows of opportunity to enter the public capital market. With 154 IPOs raising US$37.9 billion this year, Hong Kong ranked first among global exchanges on both counts, and accounted for two of the top 10 IPOs globally by proceeds.

In Japan, number of IPOs fell 9 per cent to 89 deals, raising US$3.6 billion, a 87 per cent year-on-year plunge due to the lack of any mega IPOs. Tokyo Stock Exchange's stricter examination of IPO applications this year also cooled down the market, EY said.

In Australia, 2019 IPO activity remains low, having retreated 33 per cent by deal numbers and 49 per cent by proceeds, driven by geopolitical and trade issues, and slower GDP growth.

In terms of performance, IPOs on the main boards and junior boards in Asia-Pacific are up about 18 per cent and 105 per cent since IPO respectively. 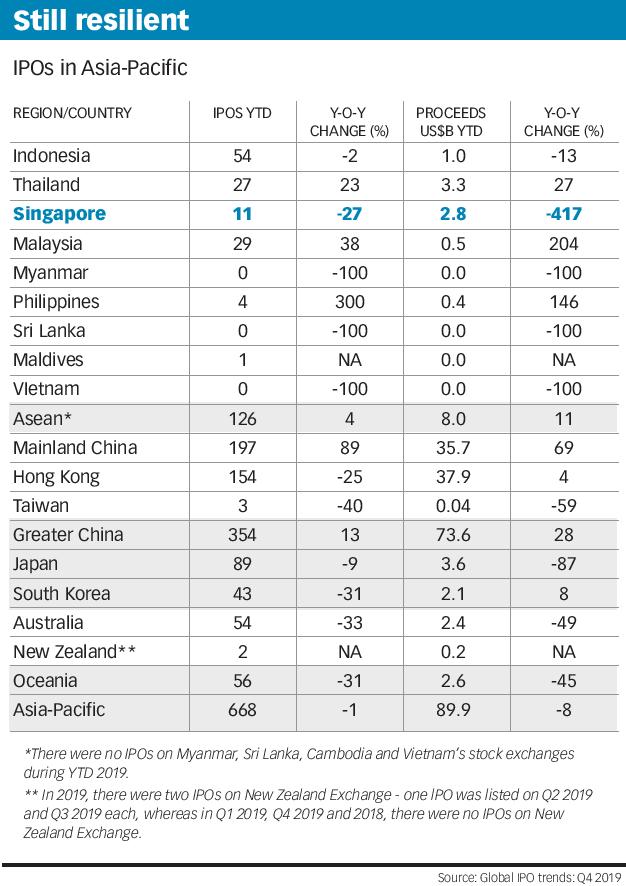 Despite their resilience in 2019, EY expects a modest decline of IPO activity next year, likely more in the second half.

"As such, investors may be more discerning of valuations of IPO candidates in 2020, which could have an impact on IPO activity," the report said.

In Hong Kong, a series of new policies that restrict the use of shell companies and suspend inactive or persistently poorly performing companies from trading, while intended to protect investors, may also impact IPO candidates' confidence to go public.

Its stock exchange is also paying more attention to the valuation levels of smaller IPOs engaged in traditional business but expecting high IPO valuations, meaning that IPO candidates will have to be more sizeable than just barely meeting the basic listing requirements, or be new economy companies that are favoured by the market players before they can enter the public capital market, it said.

Meanwhile, EY expects that in Singapore, the openness of policies and the Singapore Exchange's effort to promote its market will prove fruitful in terms of improved IPO activity in 2020.

UMS' factories in Penang and the US reopen at "limited level", Singapore ops unaffected

PRECISION-engineering firm UMS Holdings said on Monday that its factories in Penang and California have resumed...

Virus scrapped your marathon? In Japan, there's an app for that

[TOKYO] When the coronavirus outbreak forced organisers to cancel marathons in the Japanese city of Nagoya, they...

Malaysia does U-turn on virus relaxation for Heineken, Carlsberg after backlash