DISTRESSED commodity trader Noble Group slipped deeper into the abyss with a massive third-quarter loss of US$1.17 billion.

While the figure was in line with what it had flagged a month ago, the magnitude was not lost on long-suffering shareholders, especially when compared with the US$28 million in the previous corresponding quarter.

The Hong Kong-based firm said the losses were mostly non-cash items, more of which may come as it sheds further assets.

Noble said the main contributors to the group sinking deeper into the red were a non-cash loss relating to the sale of its North American Gas & Power business and an impairment loss on the Global Oil Liquids business as a result of the proposed sale of Noble Americas Corp (NAC) plus certain provisions.

The third-quarter showing brings net losses for the first nine months to US$3.05 billion on the back of a 23 per cent drop in revenue to US$5.03 billion.

The group said a challenging operating environment due to liquidity constraints continues to impact profitability.

For the three months to September, revenue slipped 18 per cent to US$1.46 billion as the troubled Singapore-listed firm shrunk its business, sold assets and continues to dispose of them to tackle debt. It is also targeting to slash headcount to 400 from over 1,000 at the end of last year.

Loss per share over the quarter widened to 89.8 US cents from 2.93 US cents previously. As before, no dividend was declared.

Noble chairman Paul Brough, who in May this year succeeded founder Richard Elman as chairman, said at an earnings briefing on Thursday: "As we dispose of further assets, we may incur additional non-cash losses."

Under a strategic review aimed at tackling the group's debt woes and steered by Mr Brough, the group has monetised its global oil liquids business and the US gas and power business over the past several months and plans to sell more assets. It has also been in discussions with lenders on its working capital and trade financing needs.

While Mr Brough was reluctant to give a time line for the sale of certain assets - given that it could "prejudice the discussions" - which could raise another US$800 million to US$1 billion, he said the firm was "obviously aware of the impending debt obligations and deadlines." 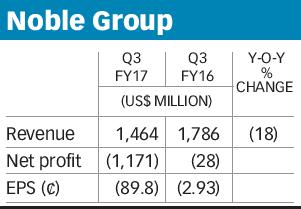 These assets are primarily outside North America and are not located in Asia either but involves "fairly chunky" assets including its aluminium operations.

"We have a number of investments and investments in joint ventures that we are readying for sale. Although we haven't put any principal assets up for sale, they are ready . . . we have done the appropriate diligence on those assets. This will support one element of our repayment plans," Mr Brough said.

The group's net debt decreased by US$112 million from end-June 2017 to US$3.7 billion in the third quarter. But this is up by US$833 million over the nine months to September 2017 from end-2016, primarily driven by negative cash flow from underlying activities due to the challenging operating environment and its reinvestment in Harbour Energy in January.

On the progress of the group's plan to seek a new investor to recapitalise its hard commodities businesses, Mr Brough said discussions with possible strategic investors was "live and ongoing and frequent in terms of meetings" but may or may not result in an actual investment.

The company's latest earnings score card should not surprise. Last month, it had warned that it expects to suffer potential net losses of some US$1.1 billion to US$1.25 billion for the third quarter.

Concurrently, the struggling firm had also disclosed that it was selling its oil-liquids business to Vitol Group that could net as much as US$582 million based on first-half year accounts which analysts had largely viewed as a positive step to lessening its debt burden.

Still, it needs to do a great deal more to alleviate the debt stress.

This latest asset sale followed a month after it completed another sale of its North American gas and power business to Mercuria.

Noble's shares ended 1.8 per cent lower at 27 Singapore cents on Thursday ahead of the results announcement.

At current levels, the stock is trading at the lowest since 1999 and year-to-date has lost over 80 per cent of its value.

Wirecard to beef up management amid fraud allegations; CEO to stay

[BERLIN] The new chairman of Wirecard said the German payments company needed to strengthen its top management as it...

[SINGAPORE] Travellers at Changi Airport were left confused early Thursday morning when the fire alarm at the...