Anita Gabrielanitag@sph.com.sg@AnitaGabrielBT
Despite Sembcorp Marine's best efforts to manage expectations a few months ago, the offshore and marine giant still fell short of analysts' expectations on Wednesday and rattled investors after reporting a wider-than-expected loss of S$53 million in the third quarter from a S$30 million loss a year ago.
PHOTO: SEMBCORP MARINE

DESPITE Sembcorp Marine's best efforts to manage expectations a few months ago, the offshore and marine giant still fell short of analysts' expectations on Wednesday and rattled investors after reporting a wider-than-expected loss of S$53 million in the third quarter from a S$30 million loss a year ago.

Additional costs for rigs and floater projects and persistently low business activity, offset by margin recognition from newly-secured production floater projects and rig delivery, were blamed for the poor performance which sent SembMarine's stock falling five Singapore cents or nearly 4 per cent to S$1.29 on Wednesday.

Revenue fell 39 per cent to S$717 million as last year's topline for the corresponding quarter of S$1.2 billion was aided by revenue recognition on delivery of two jack-up rigs.

Loss per share stood at 2.52 Singapore cents for the quarter, from a loss of 1.42 cents a year ago. No dividend was recommended for the period, unchanged from a year ago.

"While management had guided wider losses in the second-half during the first-half results briefing in August, losses in the third quarter were worse than our expectations of around S$25 million to S$30 million," said DBS analyst Ho Pei Hwa.

It also came in weaker than OCBC Investment Research's forecast of a net loss of S$63 million for the full year, not far from street estimates of S$67 million. 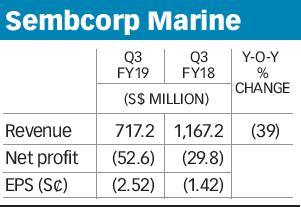 "The company had sunk into a gross loss of S$46 million in 3Q (versus S$13 million a year back). We believe this was due to cost provisions booked in the quarter for future work yet to be executed," said OCBC, adding that cost writebacks as a result of lower cost incurred could be a future possibility.

Meanwhile, SembMarine guided that it expected the trend of losses to continue into the final quarter with full-year losses coming in higher than last year.

While oil price recovery has benefited exploration and production players as evinced in the uptick of offshore capital expenditure which has driven demand for oilfield services, shipyards are at the bottom of the value chain as they are typically laggards in the cycle, Ms Ho pointed out.

She added that competition among global shipyards remains keen given the sluggish order flow over the past few years.

SembMarine made no bones about this in its outlook remarks. "Challenges in the offshore and marine sector persist and competition remains intense. Activity levels in all segments remain low except for repairs and upgrades...," it said.

The group is competing aggressively for jobs in new and existing segments and is seeing rising enquiries. "Hopefully some of them will be translated into firm orders over the next few months," said DBS' Ms Ho.

The losses were due to low business volume and accelerated depreciation of S$30 million of the fixed assets at Tanjong Kling yard. (Under SembMarine's transformation and yard consolidation strategy, the group will relocate all operations from its Tanjong Kling Yard by year-end and realise an estimated cost savings of S$48 million a year from FY2020 onwards).

The latest weak showing, say observers, could strengthen the case for a restructuring at parent Sembcorp Industries, which could involve divestment or privatisation of SembMarine.

Such hopes have ramped up since last month after Temasek Holdings launched a partial bid to take control of Keppel Corp and renewed expectations that it may be a prelude to a merger of the shipyard assets belonging to both conglomerates Keppel and Sembcorp.

[NEW YORK] Oil prices were little changed in choppy trade on Thursday as investors awaited a decision from top crude...

[BENGALURU] A strong rally this week in European stocks stalled on Thursday as investors locked in profits, although...