INVESTORS of mutual funds in Singapore pay higher fees than those in other markets because the majority of funds here charge front loads and trail commission, according to a study by Morningstar.

This makes Singapore a less investor-friendly market in terms of fees and expenses, based on the investment research firm's Global Investor Experience (GIE) report published on Wednesday.

The asset-weighted median fees of funds sold in Singapore are generally high and it is rare for investors to be able to pay for advice other than through commissions or retrocessions, said Wing Chan, director of manager research practice for EMEA and Asia at Morningstar Investment Management Asia.

"Nonetheless, there have been some positive changes, such as the government having announced in 2018 that it would reduce expenses for the Central Provident Fund Investment Scheme," he added.

The biennial GIE report grades the experiences of mutual fund investors in 26 markets across North America, Europe, Asia and Africa. For the report's sixth edition, Morningstar is publishing each of the four evaluation categories - fees and expenses, regulation and taxation, disclosures, and sales - as independent chapters.

The most investor-friendly markets with the lowest costs were Australia, the Netherlands and the United States, all of which earned "top" grade.

The US received the highest grade in all six editions of the study, thanks to the positive effects of economies of scale and competition. Meanwhile, Australia and the Netherlands both maintained their grade for the third consecutive study, as effective regulation has led to high fee transparency in both markets, while competition and economies of scale also brought about savings in Australia.

On the other hand, Taiwan and Italy were the worst performers. "Taiwan is a perennial poor performer, with some of the costliest funds among markets covered in the study," Morningstar noted.

Italy fell to a "bottom" grade as its funds subjected individual investors to front loads and retrocession, a kind of fee that asset managers pay to advisers or distributors that are often hidden from clients. Italian funds also suffered from high asset-weighted median expenses across the board. 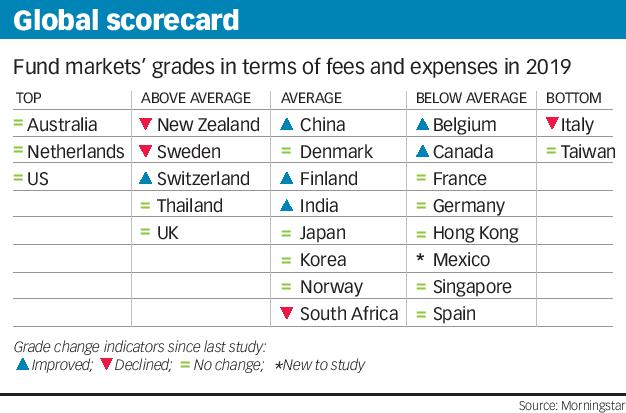 Based on Morningstar's analysis, investor experience is improving across multiple economies, given the lower fees and ease of entry for investors to buy funds without loads or trail commissions.

Fund fees have continued to decline across global markets since the last study two years ago. Asset-weighted median expense ratios for domestic and available-for-sale funds fell in a majority of the 26 markets surveyed since the 2017 study. The Netherlands saw the biggest drop in fees, followed by India and Canada.

"This (overall decline in fund fees) reflects a number of key trends including orderly competition, regulatory intervention, and changing practices that have led to the unbundling of advice and sales fees from fund expense ratios in some markets," said Grant Kennaway, Morningstar's global practice leader of manager research and co-author of the study.

Many regulators are stepping up to promote fee transparency, as government policies in those markets have facilitated increased savings through tax incentives, compulsion, or both, Morningstar noted.

The GIE study aims to empower investors worldwide by promoting dialogue and transparency around global best practices for mutual funds from the perspective of fund shareholders. It primarily considered publicly available open-end funds, or retail registered investment pools that are not listed on an exchange.

IReit to take full ownership of Spanish portfolio from Tikehau Capital, DPS at 2.85 cents for H1

With reliefs yet to unwind, Singapore banks sit uneasy about final impact of Covid-19