Jamie Lee leejamie@sph.com.sg@JamieLeeBT
Such pressures showed up in a revealing report from the Monetary Authority of Singapore (MAS). On Feb 14 - a sign of tough-love, perhaps - MAS put out an information paper about how certain private banks may slip up when it comes to fair sales practices and transparency.
PHOTO: ST FILE

GIVEN the crimped margins in the loans business, the allure of private banking is easy to see.

This is particularly so in Asia, where the number of the region's richest - or the ultra-high-net worth (UHNW) individuals - rose by 13 per cent to 103,000, a Knight Frank report this year showed. The region is due to host a third of the world's total billionaires by 2023.

But in the harried chase of the crazy-rich Asians in this competitive space, the pressures to bring in the dough - and in some cases, at the expense of clients' interest - loom.

Such pressures showed up in a revealing report from the Monetary Authority of Singapore (MAS). On Feb 14 - a sign of tough-love, perhaps - MAS put out an information paper about how certain private banks may slip up when it comes to fair sales practices and transparency.

In the 31-page report, the regulator detailed observations from thematic inspections of unidentified private banks in Singapore, and set out supervisory expectations.

A key concern, the regulator said, was "varying standards" in pricing controls and disclosures, which led to clients being overcharged on fees.

These were in part due to front officers' "oversight or negligence", where fees and charges were "miscommunicated" to their customers. This shoddy practice was found at more than one private bank with operations in Singapore, and reflected the lack of "comprehensive controls".

The problem comes about as many of the products sold to private banking clients are structured or transacted over-the-counter (OTC).

Without the price transparency that is found in trades done on an exchange, clients depend on their private banks to be clear on pricing structures. Complications arise at the point of transaction, when prices could improve or worsen relative to the indicative price quoted to the client.

Private banks are entitled to reap the benefits of such price movements in part or even in full. But the regulator found a lack of transparency around the disclosure and allocation of benefits from price improvements. In some cases, this meant that even when the transaction was made at a better price than indicated, the banks' decisions to fully or partially retain the benefits in reality resulted in a higher charge to clients than what was initially agreed.

In addition, some private banks that claimed they would pass the price improvements to clients failed to do so.

"Instances were noted where front office agreed with clients to charge a specific spread, but clients were not aware that they were in effect charged more than the agreed spread when the private banks executed the trade at a more favourable price without passing any benefit from the price improvement to clients," MAS said.

In advocating "transparent, clear and unambiguous disclosure", MAS said clients should not be misled into thinking that benefits from price improvements have been passed on to them.

One high-profile case that threw the spotlight on how fees could be misrepresented was when MAS imposed a S$11.2 million civil penalty on UBS for "deceptive trades" by its relationship managers (RMs). These client advisers "deceived or were likely to deceive" clients about the spreads and interbank prices for transactions in OTC-traded bonds and structured products.

UBS, which had actually reported the misconduct to MAS, compensated all affected clients for such misconduct over fees for the period between 2008 and 2017. MAS had levied a civil penalty against UBS relating to transactions executed from 2014 onwards in Singapore-managed accounts.

The financial liability and reputational damage from such cases can be significant. And as the MAS's most recent report suggests, some private banks today still have weak disclosure practices.

As part of MAS's overall inspections, regulators spoke privately with front-office and control-function staff, with the feedback passed back on to the management of private banks.

One of the root causes of control lapses causing clients to be overcharged in a few private banks was the lack of management attention and emphasis on pricing issues. 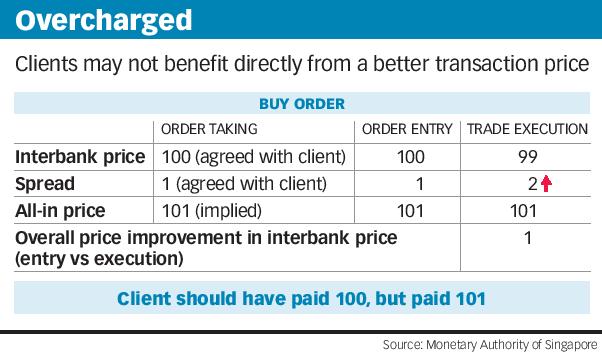 Checks by MAS also showed more broadly that some staff from the front office were not clear about the key performance indicators they were measured against. These included the weightage of financial versus non-financial targets, and their impact on performance evaluation and pay.

"The pressure on front office to grow the business and achieve targets was evident in a few private banks, partly attributable to a sales-focused and competitive culture, and an appraisal system that benchmarked RMs against their peers," MAS said.

MAS also suggested that given the breathless way in which some private banks have expanded, management needs to be mindful of "sub-cultures" within an organisation. Private banks that have grown "rapidly" through acquisitions or new hires were pinpointed as entities to be particularly cognisant and alert to such a risk.

It would be of little surprise if the selling aggression by private bankers kicks up a notch in the months ahead as banks look to boost their fee income. As it is, MAS noted that a few front office staff have tried to steer clients towards higher risk profiles in order to push riskier products. Risk profiling, MAS said, has sometimes been a mere "paper exercise".

Private banks should realise that regulators are watching the patchiness in industry standards. To maintain Singapore's standing as a financial centre, MAS is expecting management, and not just RMs, to stay vigilant.

As the industry comes under pressure, private banks should think twice about aggressively pushing RMs to ramp up sales. Higher compliance costs and penalties could be a bigger threat than a short-term weakness in income.

[FRANKFURT] Lufthansa on Tuesday said it will ground its Germanwings low-cost airline as part of a broader overhaul...

[SAN FRANCISCO] WhatsApp on Tuesday placed new limits on message forwarding as part of an effort to curb the spread...

[SINGAPORE] Singapore reported 106 cases of Covid-19 on Tuesday (April 7) said the Ministry of Health (MOH) in its...

US economy will eventually reopen but with big changes: Kudlow

[WASHINGTON] The Trump administration is aiming to reopen the US economy when the nation's top health experts give...

[RIYADH] Saudi Arabia's health minister on Tuesday warned of a huge spike in coronavirus cases of up to 200,000...