Fiona Lamfiolam@sph.com.sg@FionaLamBT
Among Temasek Holdings’ Singapore-listed investments, the 10 trusts in the portfolio averaged a three-year total return of 42.2 per cent as at Sept 20.
PHOTO: ST FILE

AMONG Temasek Holdings’ Singapore-listed investments, the 10 trusts in the portfolio averaged a three-year total return of 42.2 per cent as at Sept 20.

This brought the five-year and 10-year total returns to 67.4 per cent and 82.7 per cent respectively for the 10 trusts, the Singapore Exchange (SGX) said on Tuesday evening in a report on Temasek’s investments.

Meanwhile, the 15 SGX-listed companies in the portfolio averaged a three-year total return of 6.1 per cent, as well as five-year and 10-year returns of 0.2 per cent and 82.6 per cent respectively.

The state-owned investment firm’s portfolio includes at least 25 listings in Singapore, comprising the 15 companies and 10 trusts with a combined market capitalisation of over S$260 billion, SGX said.

Among companies, the best performers in the last three years based on total return were DBS (88.5 per cent), ST Engineering (33.6 per cent) and Keppel Corporation (27.9 per cent) as at Sept 20. On average, the trio had three-year, five-year and 10-year total returns of 50 per cent, 24.4 per cent, and 109.9 per cent respectively. All three stocks are constituents of the benchmark Straits Times Index (STI).

STI up on the week amid NODX gains, HK travel bubble

As for trusts, the top SGX-listed performers in Temasek’s portfolio over the same period were Mapletree Logistics Trust (MLT) (84.2 per cent), Mapletree Industrial Trust (MIT) (71.9 per cent) and Mapletree Commercial Trust (MCT) (70.8 per cent). They averaged a three-year total return of 75.6 per cent, bringing their five-year total returns to 119.4 per cent.

Temasek’s Singapore exposure – which stands at 26 per cent – has grown by S$41 billion over the last decade, as at its March 31 financial year-end.

Having anticipated an increasingly challenging environment since last July, the firm moderated its investment pace, investing some S$24 billion and divesting S$28 billion during the year ended March 31. 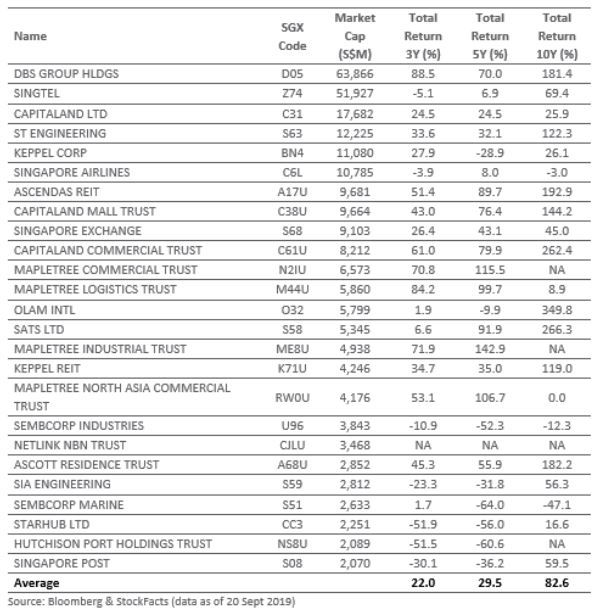 Aside from the 25 main portfolio stocks listed in Singapore, Temasek also holds small stakes in other SGX-listed companies such as UOB, OCBC Bank and City Developments Limited, the bourse operator noted on Tuesday.

Similarly, Temasek’s portfolio companies CapitaLand and Keppel Corp also have major investments in other listed entities, while companies such as Singapore Post have named Temasek as a deemed substantial shareholder through Temasek’s interests in Singtel and DBS.

CATALIST-LISTED Viking Offshore and Marine is looking to raise gross proceeds of about S$4 million through a share...

SunMoon says in talks with a potential investor for fund raising

FRUIT and seafood distributor SunMoon Food on Saturday updated that its board has various potential fundraising...

ARA Asset Management on Sunday said that its subsidiary, ARA Venn, has been appointed the exclusive manager of a new...

Seven new Covid-19 cases in Singapore, including one community case

[SINGAPORE] There were seven new coronavirus cases confirmed as at Sunday noon, taking Singapore's total to 57,911...

SunMoon says in talks with a potential investor for fund raising

Seven new Covid-19 cases in Singapore, including one community case