Will Reits continue to return 10% a year?

NO question about it: real estate investment trusts (Reits) are performing astonishingly well on the Singapore Exchange (SGX).

Investors who bought them five years ago would have enjoyed a median and average compounded annual return of about 10 per cent a year as at April 21, assuming dividends were reinvested.

By contrast, the Straits Times Index (STI) was around 3,000 points five years ago. It is barely above that today. An exchange-traded fund (ETF) tracking the STI would have returned just 3.9 per cent a year if dividends were reinvested.

Reits seem impregnable. They survived the 2013 taper tantrum. They sailed past the China crash of 2015. They have rebounded quickly from inflation worries after the US presidential election at end-2016.

A good 11 out of the 21 Reits classified as such on Bloomberg in April 2012 have returned 8 to 12 per cent a year. The median and average return of the Reit portfolio is 10 per cent.

Today, as US yields stay low due to doubts over the intended policies of the Trump administration, Singapore Reits continue to fly high. 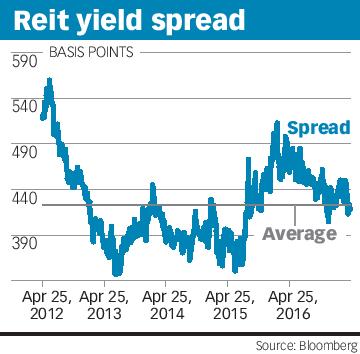 Why have they performed so well?

One reason was low interest rates, which also triggered a global search for yield assets. Secondly, landlords with properties in strategic locations arguably possess an economic moat that bestows them pricing power. Finally, Singapore's economy has been slow-going, but not recessionary. Rents could still be nudged up while skilful management has increased profitability. Debt could also still be taken to fund acquisitions.

Will the performance last?

Even if the interest rate environment remains benign, there are fundamental reasons to be cautious. Retail malls, a traditionally defensive play, will be significantly challenged by e-commerce and home deliveries of food and groceries in the years ahead. 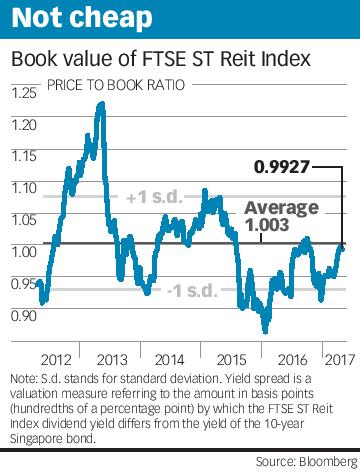 The recent stock price underperformance of Singapore's first Reit and one of the largest by market capitalisation, CapitaLand Mall Trust (CMT), is telling. Its five-year return of 6.8 per cent a year placed it in the bottom quartile of our sample. CMT's latest three-month results paint a continued picture of economic softness, as shopper traffic fell 0.5 per cent and tenant sales fell 0.7 per cent, year on year. New leases are being signed at 2.3 per cent lower than previously, due mainly to weakness at Westgate and Bedok Mall.

In the office sector, monthly rents continue to soften, falling to S$8.95 per sq ft in the first quarter of 2017, compared with S$9.90 a year ago. If demand continues to stay weak, the deluge of space this year and the next will not help. At the industrial sector, portfolio occupancy at Ascendas Reit, the major player, is mostly flat. Smaller Reits are struggling with oversupply and falling rents.

All in all, Reit yields might appear attractive but their underlying rental income flows might not be sustainable if the economy stays soft. Current valuations of around one time book might seem too rich in that case, as properties can be revalued downwards.

Meanwhile, Reit spreads relative to the local 10-year government bond have dropped below their five-year historical average. This signals confidence that rental income can improve or bond yields continue to fall. Either of those assumptions could be wrong.

Compared to five years ago, there are more Reits on the market and yet more are in the initial public offering (IPO) pipeline. With more Reits holding a diverse mix of properties in Singapore, China, Europe and the US, there will be duds dragging down overall Reit market performance.

There's nothing wrong in being a landlord. But investors must remember Reits are essentially leveraged asset plays, where relatively low yields are boosted by debt taken to fund property acquisitions.

For small-time retail investors, there will always be locally listed businesses worth looking at which are far more efficient at generating profit, but not liquid enough to attract significant institutional attention.

Two stocks highlighted by SGX at a recent public stock seminar, tourism play Straco Corporation and precision tool maker Micro-Mechanics, illustrate the potential rewards for those who get in early.

These two companies have consistently grown revenues through the years and generated solid free cash flows on high operating margins, thus qualifying as "quality" stocks in investment jargon. They have always been in strong net cash positions.

In the past five years, and including reinvested dividends, they have generated returns of 33 per cent (Micro-Mechanics) and 38 per cent a year (Straco). Apart from quality plays, there are also turnaround plays, cyclical plays, and deep value plays lurking around.

As the market rallies, they have been getting harder to find. Sometimes, one has to dig deep into the small cap space. There will be customer concentration risks, foreign exchange risks, China risks, and corporate governance risks.

But there's always opportunity, as long as the price is right.

American Airlines to ask for US$12b in government relief: WSJ

[WASHINGTON] American Airlines will seek US$12 billion in government assistance to steer the carrier through the...

[HONG KONG] Hong Kong stocks closed on a positive note Tuesday, in line with a broad Asia advance and following a...

Aston Martin may need more cash even after bailout by tycoon

[LONDON] Aston Martin Lagonda Global Holdings said it may need to tap high-interest notes it was trying to avoid...