But watch brand CEOs hopeful about 2017 as sales stabilise
Chuang Peck Mingpeckming@sph.com.sg@PeckmingBT
There was a return to basics at the week-long SIHH show as watch brands launched largely simple and classic models with prices that are more down to earth.
PHOTO: REUTERS

AFTER scraping through with some growth in 2015, Swiss watch exports to Singapore slipped 10.4 per cent in 2016 to just over one billion Swiss francs (S$1.38 billion), reflecting the downward shift in the local retail market for luxury timepieces.

The year-on-year drop in shipments to Singapore, among Switzerland's top 10 watch markets, was steeper than the overall Swiss watch exports in the same year.

Swiss watch exports globally, which amount virtually to the total global supply of luxury timepieces, tumbled 9.9 per cent to 19.41 billion Swiss francs last year, the biggest fall since the 2009 recession when shipments plunged 22.3 per cent, according to latest figures released by the Federation of the Swiss Watch Industry.

But the worst may be over. The Swiss watch federation noted that December's exports, which slipped 4.6 per cent, was "one of the shallowest falls for the year despite the fact that there was one less working day than in 2015".

China, where a clampdown in corruption is said to be the single biggest cause of the downturn in luxury watch sales, reported a strong second half - up 9.1 per cent - as mainland residents opted to buy their luxury goods at home - though shipments to the country declined 3.3 per cent for the full year.

Swiss luxury group Richemont, which makes watches under a dozen brands, including Cartier, Jaeger-LeCoultre and Panerai, said that growth in sales has returned to its own stores in the final three months of 2016.

"The watch industry appears closer to a trough, as Swiss export declines continue to reduce," said Luca Solca, head of luxury goods research at investment bank Exane BNP Paribas. "China is in good shape. Field research in Hong Kong shows that even there, watch sales were finally positive in the last months of the year." 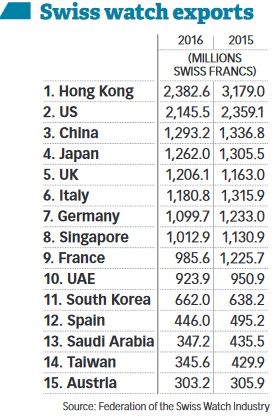 Jean-Claude Biver, head of the watch division at luxury group LVMH, whose brands include TAG Heuer, Hublot and Zenith, said that he is optimistic for 2017, feeling that "we have reached the bottom in China".

Nick Hayek, CEO of the giant Swatch group which owns watch brands such as Omega and Longines, sees a recovery this year. The Swiss watch federation expects exports to stabilise in 2017.

The telling effects of the Swiss watch industry's plight in the past year were much evident at the week-long SIHH show. There was a return to basics as watch brands launched largely simple and classic models with prices that are more down to earth.

The fall in Swiss watch exports have hit hard at Swatch and Richemont, which together account for the bulk of Swiss watch production. Swatch just announced a net sales and net profit drop of over 10 per cent and 47 per cent respectively for 2016.

Richemont spent over 200 million euros (S$303 million) buying back unsold stock and cut back about 200 jobs in watchmaking at Cartier, Vacheron and Piaget. More recently, it announced an overhaul of its management and the departure of several CEOs.

Swiss exports last year fell to their lowest level since 2011 and 13 of the 15 biggest markets shrunk. Shipments to Hong Kong, the largest market, fell 25 per cent and were down by half in four years to 2.4 billion Swiss francs. Exports to the US fell 9.1 per cent. Among the biggest markets, only the UK and South Korea expanded, each by 3.7 per cent.

In Singapore, the fall in Swiss watch exports was reflected in the balance sheets of the two biggest local watch retailers. The Hour Glass reported a 14.0 per cent drop in net profit in the quarter ending Sept 30, 2016 (the latest numbers available). Sales revenue fell 7.0 per cent.