The culprit driving up the cost of 2017's basket of festive foods is bak kwa - it's 8% dearer than in 2015, 14% more than in 2016
Leila Laileilal@sph.com.sg@LeilaLaiBT
Claudia Chongchongkmc@sph.com.sg@ClaudiaChongBT
Sheng Siong supermarket said mandarin oranges cost more because of a smaller harvest and also because of the strong US dollar.
PHOTO: KELVIN CHNG

Taking off once more

CONSUMERS may feel the pinch when shopping for Chinese New Year goodies this year, as prices have risen from last year's levels.

However, it may be comforting to note that they are still below 2015's prices by a tad, going by The Business Times' Fa Cai Index.

This annual index is compiled by tracking the average price of an equally-weighted basket of four popular festive items - mandarin oranges, beer, abalone and bak kwa (sliced roasted pork) - in the weeks running up to the Chinese New Year.

US consumer spending falls by 13.6% in April, a new low

The rise between 2016 and this year appears to track the headline Consumer Price Index (CPI) increase of 0.2 per cent in December 2016, when compared with December 2015.

The Monetary Authority of Singapore forecasts a CPI inflation rate of 0.5 to 1.5 per cent for 2017. 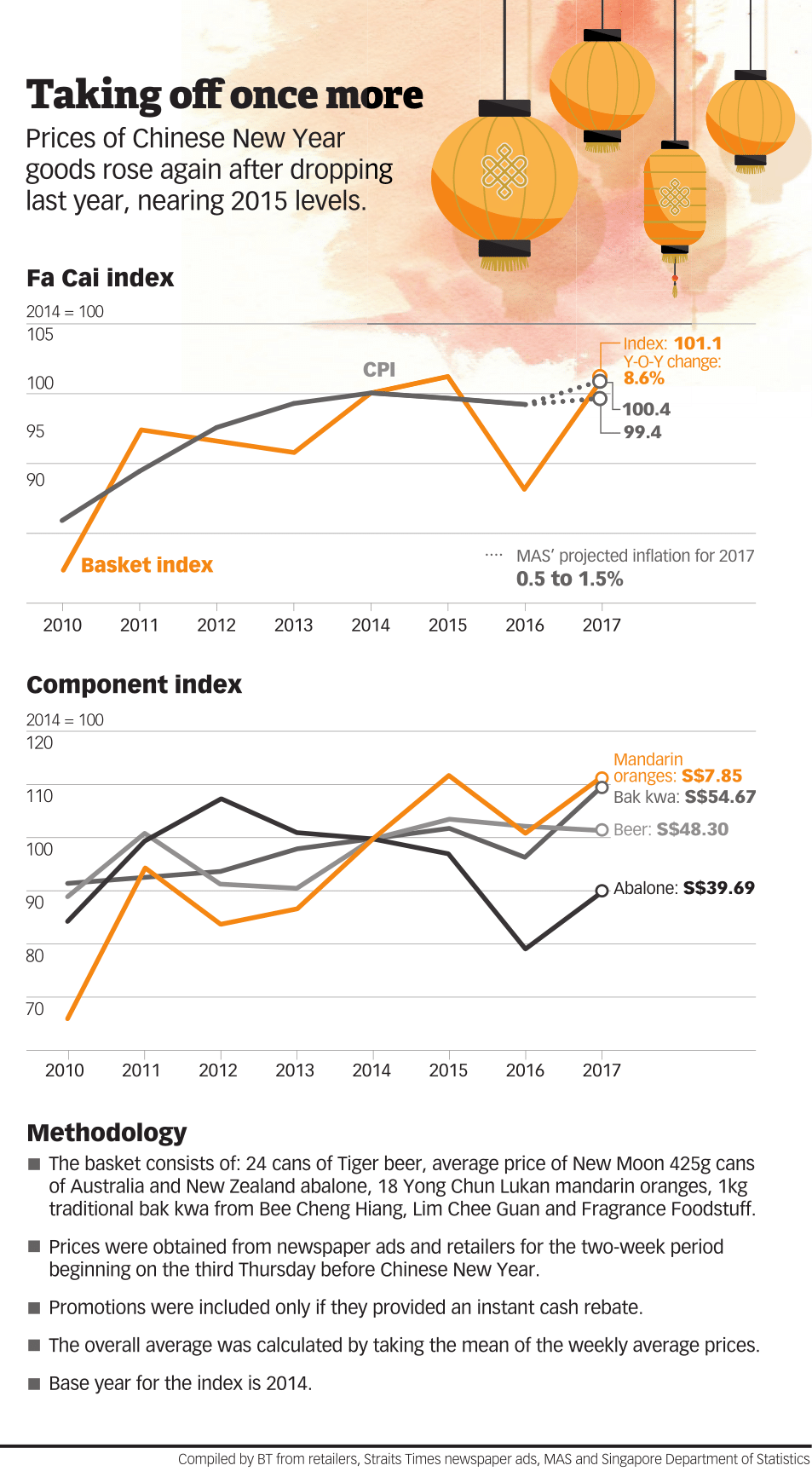 OCBC economist Selena Ling said food inflation is not uncommon during the festive season, since the Fa Cai Index items are considered Chinese New Year necessities and are in high demand. Sellers believe that consumers are compelled to buy these items despite their higher prices, she said. "However, I doubt that this pace of food price increases will be sustained post-Chinese New Year, given the softening in the domestic labour market," she said.

As the BT Fa Cai Index sample is small and by no means comprehensive, and because prices fluctuate within the festive period, the index may have a significant margin of error.

However, we hope it provides a useful snapshot of how festive costs change each year.

Mandarin orange prices fell in 2016, but went up by almost the same amount this year.

Over the past two years, the prices of beer fell 1.9 per cent, and that for abalone, 7.7 per cent.

The main culprit making the 2017 basket almost as expensive as 2015's is bak kwa; it costs 7.9 per cent more than it did two years ago.

Last year, Giant and FairPrice told BT that the low mandarin orange prices were due to good harvests. This year, the strong US dollar and a smaller harvest appear to have pushed prices back up. A box of 18 fruit now costs S$7.85 on average, compared to S$7.12 last year and $7.88 in 2015.

Ms Fong Li Ying, a buyer for Sheng Siong's fruit department, said: "The [strong] US dollar has affected prices because all our overseas transactions are done in US dollars.

"Also, the orange trees are bearing less fruit this year because of weather phenomena. For example, the typhoon in Taiwan destroyed a significant number of trees there."

A Cold Storage spokesman added that when a frost in January 2016 affected the crops in China and caused a shortage of the fruit, Cold Storage managed the price increase by negotiating directly with the farm owners rather than through third-party traders.

Abalone prices have been coming down since 2013, but rose 13.4 per cent this year. Mr Goh Kai Kui, chief executive of Goh Joo Hin Pte Ltd, which manages and distributes the New Moon brand in Singapore, attributed the increase to fishing quotas that have restricted supply.

A spokesman for Cold Storage said that while the cost price of abalone has indeed risen, the supermarket continues to offer occasional promotions to stay competitive. "We are happy that the response to our offers has exceeded our expectations," he said.

Mrs Mui-Kok Kah Wei, senior director of purchasing and merchandising at NTUC FairPrice, agreed that demand for abalone has not slowed; if anything, it has gone up in recent years, enabling the supermarket to save costs by buying the product in bulk.

As for bak kwa, which is 13.9 per cent more expensive this year than last year, retailer Lim Chee Guan said that rising labour costs have contributed to the ever-increasing prices.

Its spokesman said: "Raw materials cost has also risen due to shortages during the Chinese New Year period."

CIMB economist Song Seng Wun noted that bak kwa prices generally increase with each passing year, and that this will likely remain the trend in the coming years.

"Unlike mandarin oranges or beer, bak kwa is a festive good that is high in demand every Chinese New Year.

"This places the pricing power with the manufacturers, who are likely to increase costs in tandem with rising labour costs and cost of production."

EVEN as it battles the Covid-19 crisis, Singapore continues to plan ahead for "significant fiscal outlay" to meet...

[TOKYO] The fledgling recovery in Asian airline stocks caught an updraft on a bullish outlook from one of the world'...

Fortitude Budget: Govt will not take advantage of low interest rates to borrow

THE government will not borrow for current spending out of prudence and fairness to future generations, but also...

Fortitude Budget: Govt committed to rebuilding reserves even though no legal obligation

THE Singapore government is committed to rebuilding the country's reserves, even though there is no legal or...