THE property cooling measures are here to stay for a while, at least going by the tone that Singapore's central bank has set in its latest annual review of financial stability.

In its report released on Tuesday, the Monetary Authority of Singapore (MAS) hinted that it still wants more time for these measures to work through the economy, as global conditions in the form of still low interest rates, weak growth and intensifying political risks weigh on Singapore's household and corporate balance sheets.

Singapore has introduced several rounds of property cooling measures since the 2009 financial crisis.

On the back of these measures, "growth in housing loans has eased considerably and the overall risk profile of housing loans is strong", said MAS. "But repayment risks remain for a small group of borrowers amid the weaker economic backdrop."

Such an assessment comes as MAS deems that the protracted low-interest-rate environment holds implications for financial stability.

Low rates can encourage risk-seeking; households and firms will be tempted to take on more leverage.

Low rates also expose them to the dangers of a rate hike - which the market expects will happen soon, MAS noted.

"It will take time for household balance sheets to strengthen and become more resilient to interest rate and income shocks," said the central bank.

For now, Singapore households, corporates and banks seem resilient enough to withstand shocks, going by the results of stress tests by MAS.

Initial signs for households' risk profiles seem promising: Household debt growth fell from an average of 6.9 per cent year-on-year over the last five years, to 2.8 per cent in the three months ended September 2016. 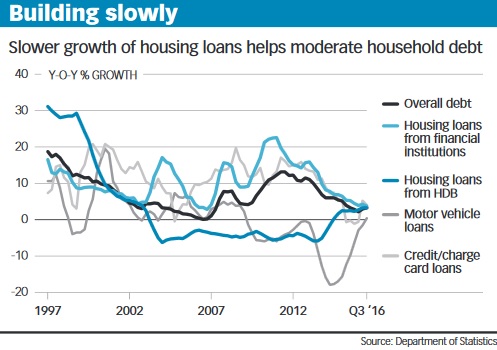 The fall was largely driven by trends in housing loans, which make up three quarters of household debt. For example, growth of housing loans from financial institutions slowed from 4.8 per cent year-on-year in Q3 2015 to 3.3 per cent in Q3 2016.

But beyond these improvements, MAS noted that some borrowers still have problems with repayment.

In September this year, the share of mortgage loans that were more than 30 days in arrears increased to close to one per cent, up from 0.9 per cent a year ago.

Non-performing housing loans also inched up slightly over the past year and stood at 0.4 per cent in Q3 2016, though still much lower than the peak of one per cent recorded during the recent financial crisis.

"MAS remains vigilant in monitoring property market developments and, if necessary, will take appropriate measures to maintain a stable and sustainable market," it wrote.

Beyond worries about household balance sheets, MAS wrote that weak global growth may eat into household incomes and corporate profitability.

Beyond the oil-and-gas sector, the manufacturing, as well as transport, storage and communications (TSC) sectors were flagged in MAS's report. NPL ratios of the latter two sectors rose to 5.9 per cent and 7.1 per cent in Q3 2016 respectively. 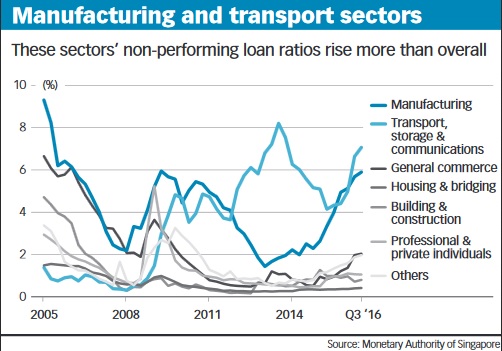 Corporate profitability of firms in the manufacturing, commerce and TSC sectors also weakened. Their ROAs declined by 0.6, 0.7 and 0.8 percentage points respectively in Q2 2016 on a year-on-year basis.

For example, following Brexit, or the United Kingdom's vote to leave the European Union, political uncertainty in Europe has increased.

"Even then, markets do not appear to have priced in risks to EU integration, as sovereign yields of more vulnerable eurozone economies remain much lower than during the height of the eurozone debt crisis," wrote MAS.

How policymakers tackle political risks may have "long-lasting effects on global growth and downstream effects on the financial sector", said MAS.

"Financial surveillance increasingly needs to take into account possible shocks from and repercussions of political events," it urged.

"Policymakers should also stand prepared for disruptions and tail risks."