It will grow professionals in digital tech, pre-fab building and green buildings; BCA notes progress - cost premiums for prefab work has come down in recent tenders
Lee Meixianleemx@sph.com.sg@LeeMeixianBT
The construction industry aims to more than double the pool of professionals in digital technology, pre-fabrication and green-building capabilities from the current 32,000 to 80,000 by 2025.
PHOTO: ST FILE

THE construction industry aims to more than double the pool of professionals in digital technology, pre-fabrication and green-building capabilities from the current 32,000 to 80,000 by 2025.

The sector's Industry Transformation Map (ITM), which was launched on Tuesday, will train its sights on ramping up the use of digital technology by the various parties involved in the life cycle of a building - from its architects and consultants through to its contractors and facility managers.

The ITM, part of Singapore's plan to restructure its economy, will also home in on two other aspects of construction that have been underway for a while - the use of pre-fabrication and green buildings.

At the launch of the construction ITM, Second Minister for National Development Desmond Lee noted that traditional ways of building have often led to abortive and wasteful work downstream, and that time is wasted when the parties up or down the line miscommunicate.

Demand down, costs up, but builders will rein in bids

"(With digital technology), this means the accuracy of construction plans can be improved, conflicts are resolved at the design stage - not at the construction phase, and there is better coordination of the production, delivery and installation of building modules on-site," said Mr Lee, who is also Minister for Social and Family Development. 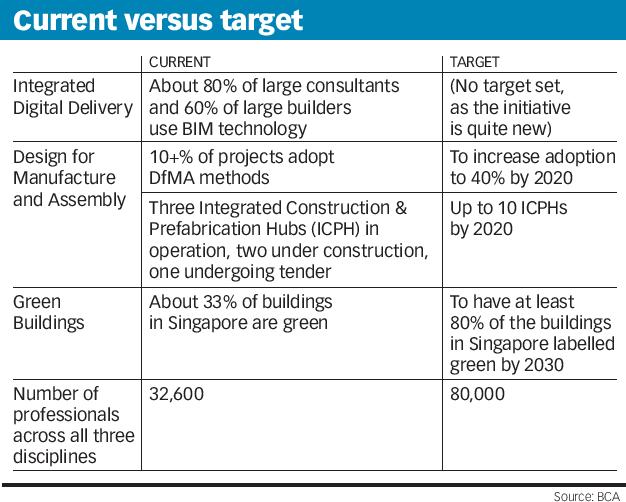 Teambuild Construction executive director Johnny Lim said the industry needs a unifying force to bring companies on different levels of technology engagement onto the same page. "The consultants, developers, contractors  are all investing in technology, but very much in silos. Everybody is doing their own thing, so if BCA comes in to coordinate, I think it can take off in a bigger way."

Mark Sawyer, director of construction industry strategy at Trimble, a positioning-solutions firm, said that architects, designers and large general contractors have been actively adopting technology, but this is less true of sub-contractors and smaller firms.

Smart technologies are not limited to BIM; they also include drones, augmented reality, inspection software, and, eventually, smart cranes and on-site robots.

The push towards pre-fabrication entails moving certain aspects of construction from the open work site to a controlled environment such as a manufacturing plant, to produce components for on-site assembly. The focus is thus on Design for Manufacturing and Assembly (DfMA).

BCA has set a target - to increase adoption of this concept from the current 10-plus per cent to 40 per cent.

It also plans to make prices more competitive so that adoption is sustained.

Paying a cost premium to learn from one's experience - and sometimes from one's mistakes - has been a bitter pill for first movers to swallow, but the BCA has noted a gradual change to the industry's mindset, in that industry players are becoming more open to sharing knowledge among themselves. They now visit competitors' factories and construction sites to understand how things are being done.

This is because the companies understand that a rising tide will ultimately lift all boats.

In fact, the cost premium for adopting PPVC construction has thinned from 10-20 per cent to 8-10 per cent in recent tenders, said BCA chief executive officer Hugh Lim.

"It's not a raw-material premium; its actually a risk premium that the contractor builds in, because if they are not certain, they actually price in a certain buffer just in case.

Such a change will, it is hoped, draw more Singaporeans to the sector, often perceived as a "blue-collar" one.

The BCA said a taskforce has been set up to look at providing more structured internships and training for fresh graduates; opportunities also exist for existing professionals to upgrade their skills through training programmes and scholarships.

The ITM was borne out of consultation with stakeholders for over a year, and will continue to evolve with feedback from the industry.

Mr Lee said in his speech: "To be honest, we are a bit behind in these areas today, compared with some other countries. But we have always been nimble in Singapore and responsive to challenges, so I believe we will not just catch up, but aim to leapfrog our competition."

MAINBOARD-LISTED indium ingot dealer USP Group on Sunday announced changes in the agenda for the extraordinary...

THE manager of Lippo Malls Indonesia Retail Trust (LMIRT) has announced a further extension to the long stop date...