Siow Li Senlisen@sph.com.sg@SiowLiSenBT
Slow payments by the construction sector in Q1 2017 jumped to 55.22 per cent, up from 47.97 per cent in Q4 2016, said the Singapore Commercial Credit Bureau on Tuesday.
ST PHOTO

CONTRACTORS' cash flows continued to deteriorate in the first quarter, with the small guys hurting the most in the economy's worst-performing sector.

In the economy at large, there was little change by Singapore firms in their payment performance, reflecting the weak economy. Quarter-on-quarter, slow payments slid slightly by 0.47 percentage points - from 43.28 per cent in Q4 2016 to 42.81 per cent in Q1 2017, the Bureau said.

As with Q4 2016, the construction sector registered the highest proportion of slow payments since Q4 2011, when such payments accounted for nearly three-fifths of payment delays, at 58.30 per cent.

The sector registered the highest quarter-on-quarter rise in payment delays as a result of a visible deterioration in payment performance by the building construction sub-sector and special-trade contractors. 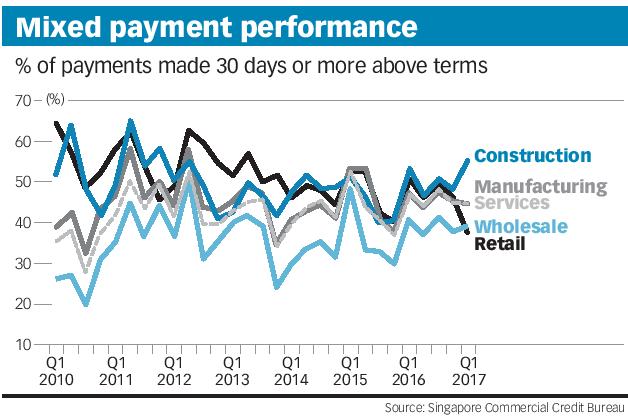 The median forecast among economists in the latest quarterly survey by the Monetary Authority of Singapore put the sector's growth at just 0.3 per cent this year - a major downgrade from last December's forecast of 2.4 per cent.

The government has said it will bring forward S$700 million in infrastructure projects to support the construction sector.

The sector shrank by 2.8 per cent in the fourth quarter of 2016, extending the 2.2 per cent contraction recorded in the quarter before.

For the whole of 2016, the sector expanded marginally by 0.2 per cent, moderating from the 3.9 per cent growth in the previous year.

Contracts awarded fell by 29 per cent to S$4.6 billion in Q4 2016, on the back of a fall in both public- and private-sector construction demand.

Audrey Chia, D&B Singapore's chief executive, said: "As the construction industry is highly capital-asset-intensive, firms within the industry are facing a difficult time sloughing off heavy debts incurred from working capital loans, which has in turn negatively impacted their cashflow."

Outside the construction sector, payments performance was mixed. Services and wholesale deteriorated mildly; retail made a big improvement, and manufacturing, a moderate one.

Slow payments in the retail sector improved significantly in Q1 2017 on the back of an uptick in retail activities of discretionary goods.

The manufacturing sector's slight improvement in slow payments came from a better performance by the food manufacturing and pharmaceutical segments.

Consumer confidence in US improves on outlook for economy

[WASHINGTON] US consumer confidence rose in January as Americans grew more upbeat about the outlook for the economy...

Jane Fonda to get lifetime award at Golden Globes

[LOS ANGELES] American actor and activist Jane Fonda will get a lifetime achievement award at the Golden Globes...

US: Stocks steady amid earnings deluge

[BRUSSELS] The European Union paved the way for companies including Tesla and BMW to get about US$3.5 billion of...

Netherlands has worst riots in four decades over Covid curbs