Industry players applaud new MAS initiatives to expand VC pool and boost startup ecosystem
Jamie Lee leejamie@sph.com.sgJamieLeeBT
Venture Capital (VC) funds looking to set up shop here can soon get approval in a matter of weeks and without capital requirements, as the Monetary Authority of Singapore (MAS) proposed on Wednesday to relax some rules for VC managers.
PHOTO: BLOOMBERG

Nothing ventured, nothing gained

VENTURE Capital (VC) funds looking to set up shop here can soon get approval in a matter of weeks and without capital requirements, as the Monetary Authority of Singapore (MAS) proposed on Wednesday to relax some rules for VC managers.

The changes come as Singapore's drive to attract and build startups and growth companies from Asia kicks into high gear, with hopes for a more diverse pool of VC funds to support young companies that can be developed into the next unicorns.

MAS said it would offer a simplified authorisation process and regulatory framework for managers of VC funds, as soon as by July this year.

MAS said VC managers operate differently from other forms of fund management. In general, VC funds invest only in unlisted business ventures operating for no more than five years; do not accept new subscription after the close of a fund, with redemption only available at the end of the fund life; and are offered only to sophisticated investors.

"It will allow new VC managers a faster time-to-market and reduce their ongoing compliance burden. We hope this will attract more VC managers and spur them to play a greater role in supporting entrepreneurship and innovation." 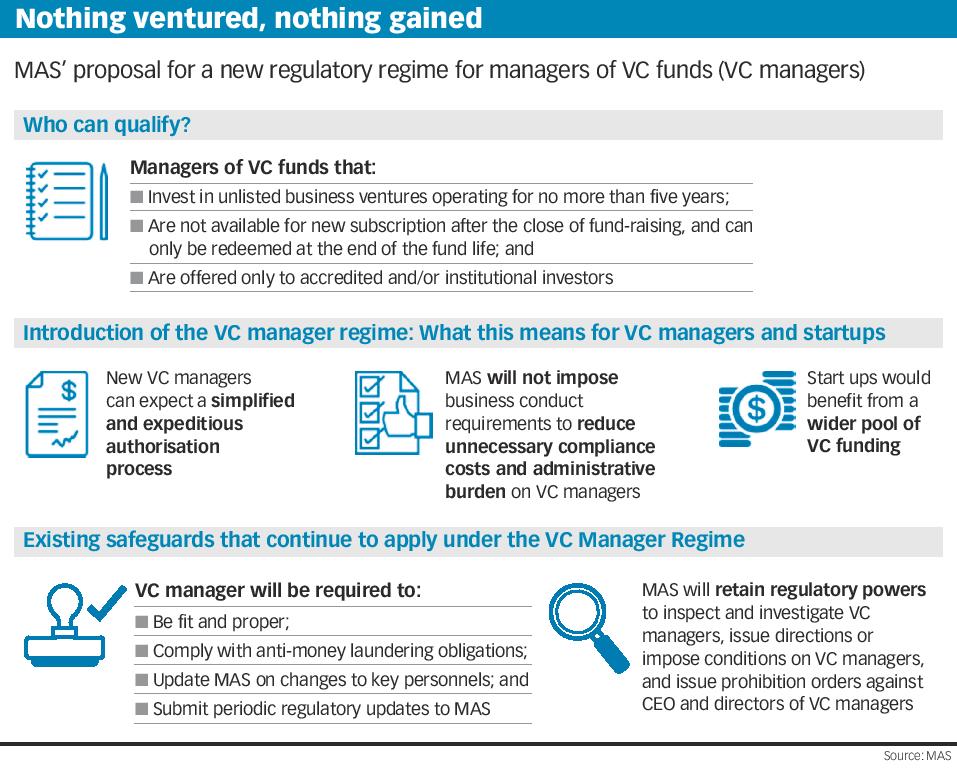 Having more VCs could mean a more nurturing environment for local start-ups here, with some rumbling fears that the young guns are exiting too quickly instead of being groomed to be the next unicorn, or a start-up worth at least US$1 billion.

This also comes as Singapore's neighbours have been promoting the VC industry in their domestic markets, said Jeffrey Chi, chairman of Singapore Venture Capital and Private Equity Association. About 70 per cent of funds held by Singapore-based asset managers as at 2015 are invested into Asia-Pacific, with a large chunk of that going into Asean.

"Singapore needs something like this to stay relevant and competitive," he told The Business Times.

Indeed, MAS said there is room to further expand the size and scope of VC funding available for start-ups.

There are now about 30 registered VCs in Singapore. The fund size is generally about US$1 billion, though there are several other VC funds that are managed by larger corporations, or may not be registered as they are effectively one-man VCs who invest in fledgling firms. Corporate VC funds can now switch over to this regime.

Under the proposed new regulations, fresh and existing VC managers will not have to hold the typical base capital of S$250,000.

MAS will not require VC funds to make independent valuations, create internal audits, and submit audited financial statements to it. It will instead focus on a "fitness and propriety assessment" of the VC managers. This is expected to include checks for poor regulatory records both in Singapore and abroad, of the managers.

The regulator said the new regime accounts for the "contractual safeguards" already found in typical fund management contracts, as savvy VC investors are expected to negotiate terms to keep their monies secure.

By comparison, other fund managers must be run by directors with at least five years of relevant experience in fund management.

But VC managers will still have to obey anti-money laundering rules, and submit annual regulatory updates to the MAS. The regulator will also retain powers to inspect and probe VC managers, as well as issue prohibition orders against CEO and directors of VC managers.

Co-founder of local mobile security start-up V-Key Benjamin Mah said the changes will broaden the ecosystem and encourage a larger number of players. "Actual deal flow is the best indicator of the health of innovation and investment," he said.

VC managers applauded the move, with Sameer Narula, managing partner of ACP, saying that the lower costs will allow smaller fund managers to compete in the market.

Lim Kuo-Yi, partner at Monk's Hill Ventures, said in time, there has to be more access to other forms of financing to raise funds. "The widening of the funding ecosystem, such as growth capital beyond Series A or B, will further cement Singapore's position as the centre for startup and innovation activities," he said.

Likewise, Amit Anand, co-founder of Jungle Ventures, said more can be done to create partnerships with investors, citing work by the National Research Foundation of Singapore as an example.

Two shophouses in CBD, three in Jalan Besar up for sale

61 new Covid-19 cases in Singapore, including 2 in the community and 3 imported

[SINGAPORE] There were 61 new coronavirus cases confirmed as of Tuesday noon (Aug 11), taking Singapore's total to...