Jamie Lee leejamie@sph.com.sg@JamieLeeBT
GIC has raised its defensive position by a slight notch amid a slowing rate of globalisation on trade tensions, as well as lofty valuations, as it reported a 3.4 per cent annualised rolling 20-year real rate of return.
PHOTO: REUTERS

Hunkering down, sticking with Asia

GIC has raised its defensive position by a slight notch amid a slowing rate of globalisation on trade tensions, as well as lofty valuations, as it reported a 3.4 per cent annualised rolling 20-year real rate of return.

The latest published real return for the 20-year period ended March 31, 2019 is unchanged from that a year ago, and means that the international purchasing power of the reserves has nearly doubled between April 1999 and March 2019. GIC manages "well over" US$100 billion in assets.

Its asset allocation as at end-March this year further showed that its cash and bonds allocation of 39 per cent was its highest since it adopted its latest investment framework in 2013. From a year ago, this allocation to cash and bonds was up from 37 per cent.

Reducing exposure there reflects GIC's view that developed markets are now closer to late cycle, particularly in the US, with economic and corporate earnings indicators showing signs of slowing, and as greater financial vulnerabilities are emerging due in part to high leverage.

"We have turned a bit more defensive in our portfolio," said Lim Chow Kiat, chief executive officer, GIC, at a media briefing, noting that trade tensions will linger "for quite a while".

"But we are prepared. If there are dislocations, we will take advantage of that." 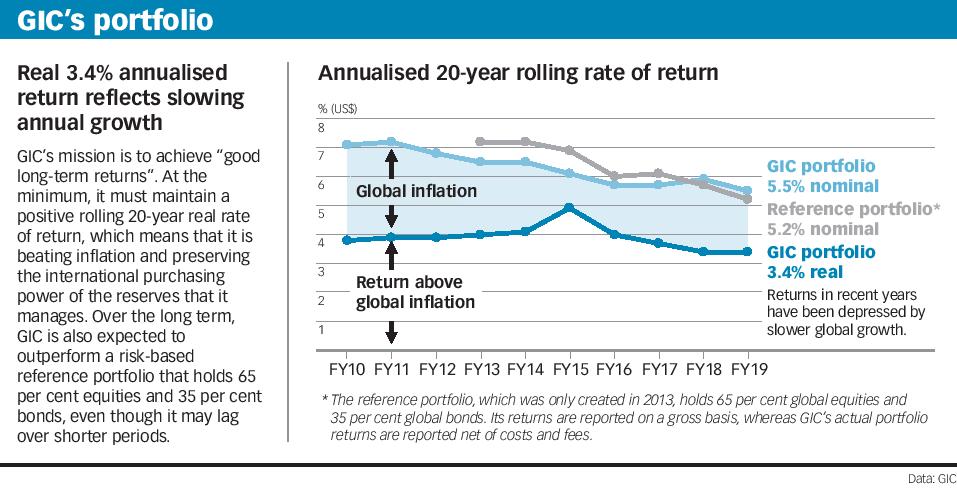 GIC group chief investment officer Jeffrey Jaensubhakij flagged that one key concern is the permanent impairment of investments, when assets are bought at the current high prices, then adjusted down and maintained at a lower valuation.

GIC is also mindful of risks embedded in the portfolio, with the 20-year nominal return reflecting a volatility of 8.9 per cent, lower than most market portfolios, said Mr Lim. Furthermore, this 8.9 per cent is lower than that in GIC's reference portfolio - a portfolio that reflects the risk GIC's client, Singapore's Ministry of Finance, is prepared for GIC to take in generating long-term investment returns - which stood at 10.6 per cent over the same period.

Amid subdued global growth, the trade and tech tensions are sketching out rising risks that the decades of benefits yielded from globalisation are being rolled back. The threat of secular stagnation looms. All in, there are more negative factors creating potential downside for a global investor such as GIC, said Mr Lim.

That said, GIC has sought out assets that are less likely to be hit by large disruptions due to the trade tensions.

As an example, GIC on Monday announced that it and Brookfield Infrastructure plan to acquire Genesee & Wyoming Inc (G&W) - an owner of a network of 120 short-line rail roads predominantly in North America - in a deal valued at US$8.4 billion including debt. At the press briefing, Dr Jaensubhakij pointed out that G&W is focused on the internal US domestic economy to ship goods such as farm produce within the country.

Dr Jaensubhakij later told the media: "The proliferation of data gathering and data processing is a growth that will not be impeded by trade war. We can see that even five to ten years out, these are likely to have quite significant growth."

Even as countries are looking to have more data stored locally, rather than overseas, GIC can still ride on the data trend by working with international partners that can set up localised data centres, he added.

Even as the US and China call a truce in a bid to iron out their dispute over trade imbalances and technology transfers, GIC is watching to see how businesses are shifting their supply chains, with Mexico and South-east Asia being two natural cost-competitive markets due to be tapped.

"In the last six months, we are hearing that Chinese companies are talking about the next new factories that will open in different parts of South-east Asia, that will allow them to diversify their export sources. However, it is at very early stages. We're trying to monitor where those marginal shifts are occurring, and are asking, 'what are the investments we can make that will take a little bit of advantage from that'," said Dr Jaensubhakij.

Against that backdrop, GIC is also invested in two Vietnamese banks - Techcombank and Vietcombank - to tap the growth of the banking system as more Chinese companies look to set up their operations in the country that boasts of a large and young working-age population, he said. 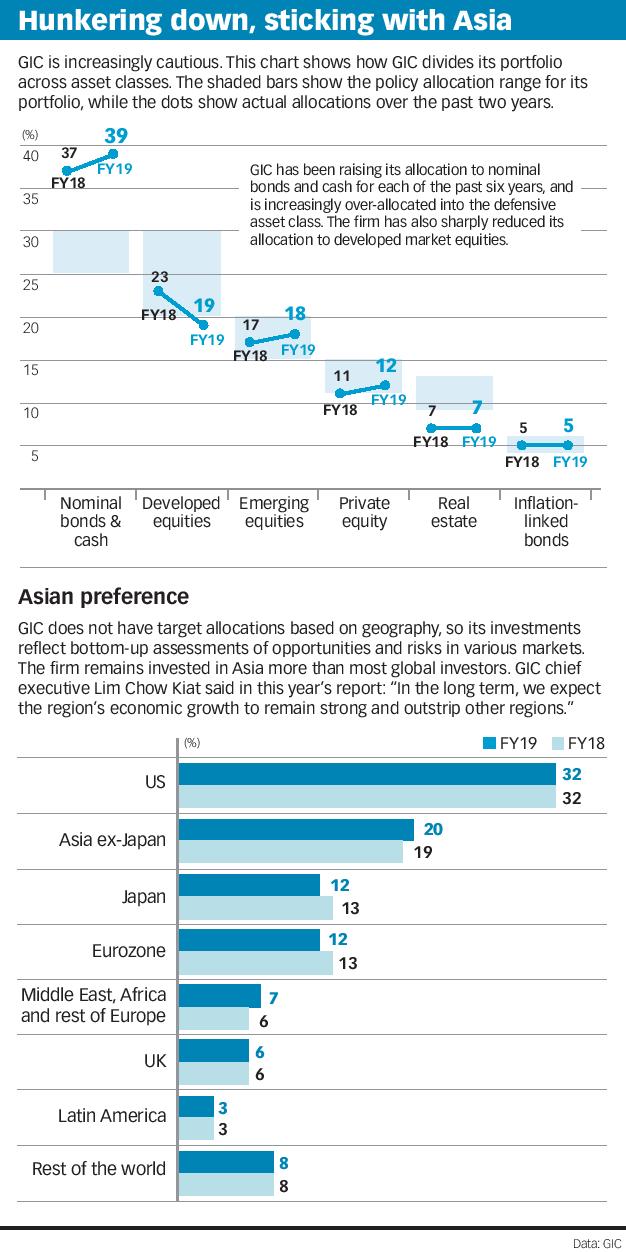 In the last three years, GIC's 20-year rolling real return has been below 4 per cent, as the exceptionally high returns of the tech bubble period in the late 1990s is dropping out of the 20-year window, even as the post-bubble declines remained.

GIC expects this one-off effect, coupled with the continuing environment of low returns, to weigh on the rolling 20-year return over the medium term.

[NEW YORK] As a teenager, Sergio Rossi and his brother, the sons of a bespoke shoemaker, would travel up and down...

[HONG KONG] PrimeCredit Ltd, a Hong Kong consumer credit company, is exploring a sale of the business, according to...

THE Accounting and Corporate Regulatory Authority (ACRA) and the Singapore Exchange Regulation (SGX RegCo) are...

General mask use OK where hand-washing, distancing difficult: WHO

[GENEVA] The WHO said Monday that facemasks could be justified in areas where hand-washing and physical distancing...

[SYDNEY] New Zealand's central bank on Tuesday said it would buy up to NZ$3 billion (S$2.56 billion) of local...