Janice Hengjaniceh@sph.com.sg@JaniceHengBT
The Monetary Authority of Singapore (MAS) is holding steady on monetary policy but downgrading its forecast range for core inflation to between 1 and 2 per cent, it announced at its latest half-yearly monetary policy review.
PHOTO: ST FILE

THE Monetary Authority of Singapore (MAS) is holding steady on monetary policy but downgrading its forecast range for core inflation to between 1 and 2 per cent, it announced at its latest half-yearly monetary policy review on Friday.

After two consecutive slight increases in the pace of Singdollar appreciation in 2018, MAS said that it is maintaining the Singapore dollar's current rate of appreciation. The width of the policy band and the level at which it is centred will also be unchanged. This is consistent with a "modest and gradual appreciation path ... that will ensure medium-term price stability", the central bank added. 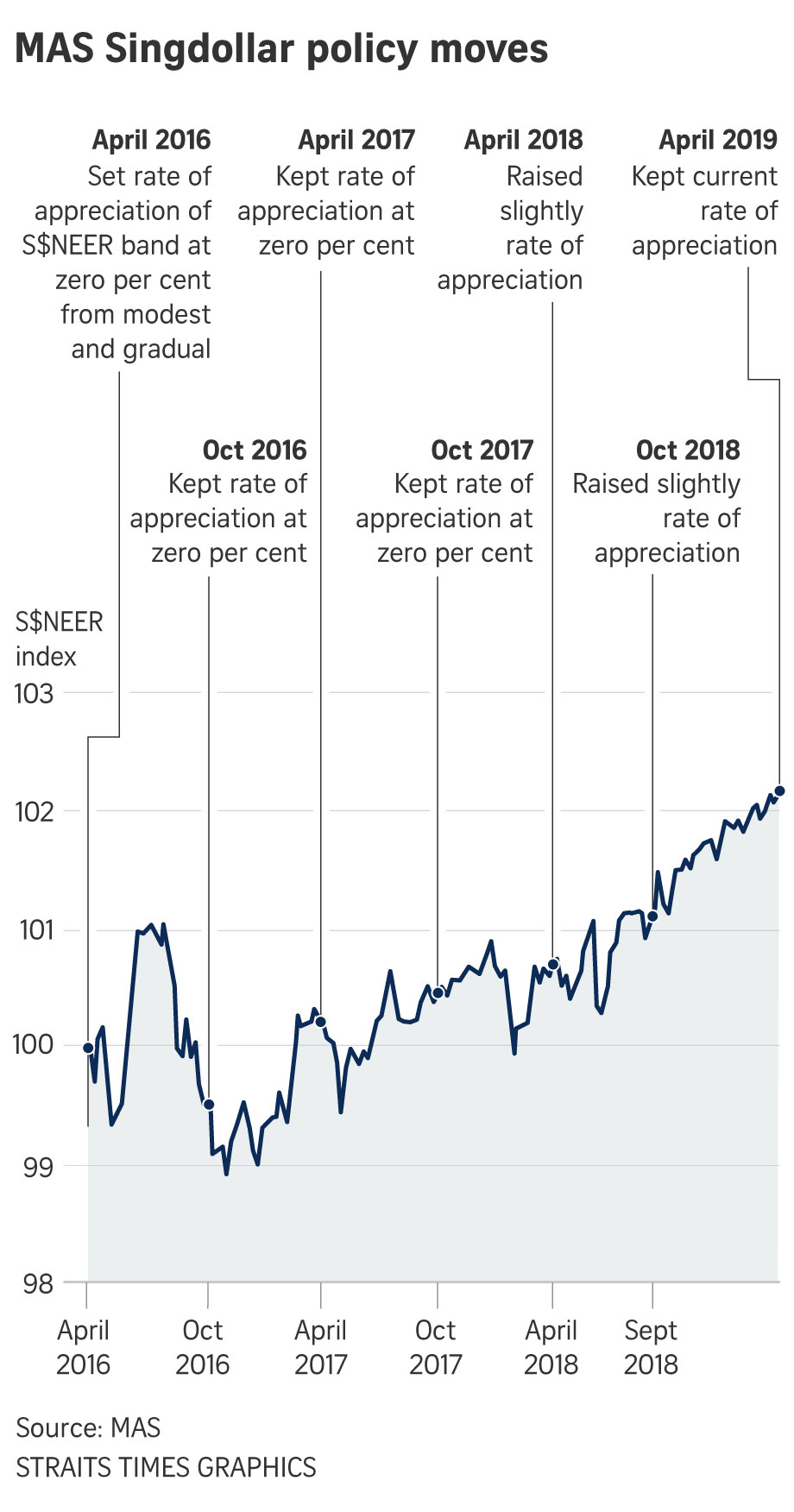 Economists had expected this lack of further tightening, given weaker gross domestic product (GDP) growth, softening inflation, and the United States Federal Reserve having paused in its monetary policy tightening.

MAS manages the exchange rate against a trade-weighted basket of currencies of major trade partners. The Singdollar is allowed to float within an undisclosed policy band called the Singapore dollar nominal effective exchange rate (S$NEER) that can be adjusted when monetary policy is reviewed at the half-yearly meetings.

Explaining the latest monetary policy decision, MAS noted that Singapore's GDP growth has eased, "bringing the level of output closer to its underlying potential", and added: "Despite some pickup in labour costs, inflationary pressures are mild and should remain contained."

With core inflation lower than projected due to weaker global oil prices and the stronger-than-expected impact from the open electricity market, MAS is downgrading its core inflation forecast range for 2019 to between 1 and 2 per cent from the previous prediction of between 1.5 and 2.5 per cent.

Its 2019 forecast for headline inflation remains unchanged at 0.5 to 1.5 per cent. It had been revised in February, down from the previous 1 to 2 per cent.

MAS has not changed its 2019 GDP growth expectation and still expects this to come in slightly below the mid-point of the official 1.5 to 3.5 per cent forecast range.

"In all, the pace of growth will be slightly below potential this year, following two years when it was above trend," MAS said. "With the positive output gap expected to narrow, inflationary pressures will be kept in check."

Also on Friday, the Ministry of Trade and Industry released advanced estimates showing 1.3 per cent GDP growth in the first quarter of 2019, down from 1.9 per cent growth in the preceding quarter.

Economists saw dovish tones in Friday's statement but stopped short of predicting a softening stance for the next policy decision in October, with most expecting the MAS to maintain policy.

UOB economist Barnabas Gan highlighted key changes in rhetoric between Friday's statement and the previous round in October 2018: growth is seen to be "slightly below potential this year", down from slightly above potential; global growth has "moderated by more than expected", compared to having previously been "relatively resilient"; and "external sources of inflation are likely to be benign", compared with October 2018's view that imported inflation would increase.

UOB has changed its guidance for October's policy statement, now seeing it as increasingly likely that the MAS will maintain its current stance instead of tightening.

Mizuho Bank head of economics and strategy for Asia and Oceania Vishnu Varathan also saw "dovish hues" to the policy statement but he noted that MAS had not turned around on prior policy normalisation, "nor has it changed its guidance to one of imminent easing". He sees the MAS as "likely to pause for the time being" as it sees how downside risks unfold, before resuming calibrated steepening of the S$NEER, "most likely in 2020".

Some economists who had earlier seen a further tightening in 2019 as possible, depending on economic conditions, now see it as unlikely.

HSBC economist Joseph Incalcaterra and senior Asia FX strategist Joey Chew believe "the conditions for further tightening will not be met" in 2019, forecasting growth of 2.3 per cent and expecting core inflation to remain below the long-run average.

And ING Asia economist Prakash Sakpal is not ruling out an easing if economic conditions deteriorate further, although his baseline case is for stable MAS policy in 2019.

Gilead's remdesivir gets US FDA approval for hospitalised Covid-19 patients

Pelosi says 'just about there' on US stimulus; Senate hurdle awaits

WEALTH management and brokerage platform iFast Corporation on Friday reported a net profit of S$6.2 million for the...

PROPERTY firm The Straits Trading Company will issue at par S$200 million worth of notes maturing on Oct 29, 2025....

[VATICAN CITY] The pope's comments in support of gay civil unions did not go far enough and could even harm the...