NODX back in the red in September after a flat August

However, 4.8 per cent year-on-year fall better than market's expectation of a 5.8 per cent drop
Chuang Peck Mingpeckming@sph.com.sg@PeckmingBT
Non-oil domestic exports (NODX) slipped back into negative territory in September, posting a year-on-year 4.8 per cent decline after a flat growth in August, the latest trade figures from International Enterprise (IE) Singapore on Monday showed.
ST PHOTO

NON-OIL domestic exports (NODX) slipped back into negative territory in September, posting a year-on-year 4.8 per cent decline after a flat growth in August, the latest trade figures from International Enterprise (IE) Singapore on Monday showed.

But the fall, the sixth in the past nine months of the year, wasn't that bad; the market was expecting a 5.8 per cent drop.

There's also good news for the NODX sequentially. Month on month, it jumped by a seasonally-adjusted 2.4 per cent last month, bouncing back from a 1.9 per cent slip in August. This was better than the 1.8 per cent increase tipped by private-sector economists.

Nomura Singapore's Euben Paracuelles and Brian Tan said the surprisingly better NODX numbers in September, due to a better-than-expected showing in electronics and pharmaceutical domestic shipments, indicate that manufacturing activity may be higher than the third-quarter GDP advance estimates suggested. This could lead to an upward revision in the Q3 GDP (0.6 per cent) figure.

But while UOB has estimated that the trend-growth for NODX has improved for another month in September, the bank is still maintaining its forecast of a full-year 2.5 per cent year-on-year decline.

Mr Tan said in a brief report that there is no certainty that Singapore's trade numbers will get stronger. "Should there be a large economic or financial shock, it may still change this improving path." 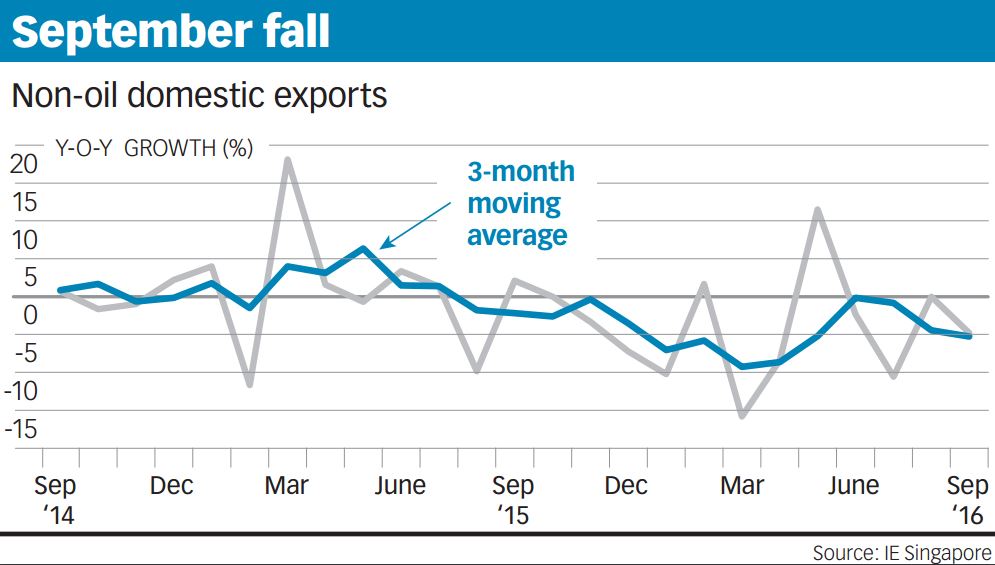 IE Singapore's most recent forecast, put out in August, pegged the NODX falling 3.0 to 4.0 per cent for the full year.

In the first half of the year, the NODX slumped 4.5 per cent, suggesting that the descent from thereon would be gentler.

But the latest year-on-year dip, while not as big as feared, still suggests that the NODX went down at least around 4.0 per cent in the third quarter - it fell 10.6 per cent in July and growth was flat in August.

Citigroup's Kit Wei Zheng calculates that in real terms, the Q3 NODX levels are still 6.3 per cent below the Q2 levels.

Still, the electronic NODX fell just 6.6 per cent, a similar pace as in August.

Pharmaceuticals exports, which tend to be volatile, were stronger than expected, with growth surging 16.2 per cent in September, recovering from a 17.9 per cent dive in the previous month.

However, this was offset by and an unfavourable base effect in ships, boats and floating structures (-99.9 per cent) and civil engineering equipment parts (-47.6 per cent).

Citigroup's Mr Kit said: "Pharmaceutical-led sequential rise provides no reason to cheer as yet, given the volatility of monthly data."

He added that the Monetary Authority of Singapore has projected global trade in 2016-17 to "grow more slowly than expected".

External demand has stayed weak, with NODX shipments to all 10 major markets having fallen in September; the exceptions are Hong Kong (+21.7 per cent), the EU (+9.9 per cent) and South Korea (+23.8 per cent).

NODX shipments to Malaysia fell (-12.3 per cent), as were those to Indonesia (-16.1 per cent) and to the US (-7.2 per cent). These were the biggest contributors to NODX's drop last month.

Ng Weiwen, an economist at ANZ Research, said: "Singapore's September export weakness mirrors softness in export data elsewhere in the region, such as China, and contrasts with other constructive signals, including a firm rise in manufacturing PMI export orders."

Non-oil re-exports rose 1.2 per cent year-on-year last month, easing from a 8.5 per cent jump in August, said IE Singapore. Oil domestic exports recovered from a 8.0 per cent decline in August to post a 1.6 per cent growth.