MAS macroeconomic review paints rosier external outlook, but labour market a worry with unemployment rates expected to rise
Soon Weilunbtnews@sph.com.sg@SoonWeilunBT
The firmer external outlook was not enough for MAS to shift away from its neutral stance; it said that this was needed for an "extended period" last October.
ST PHOTO: KUA CHEE SIONG

HOW Singapore's soft labour market develops in the coming months may be the final, crucial piece of the puzzle on when the central bank's next policy move - a tightening - will be, economists say.

This is despite the city-state's growth outlook becoming rosier in the six months since the Monetary Authority of Singapore (MAS) last said that it would maintain its policy stance for an "extended period".

The firmer external outlook was not enough for MAS to shift away from its neutral stance; it said that this was needed for an "extended period" last October.

It then repeated this phrase two weeks ago when it issued its biannual monetary policy statement for April.

This sparked a debate among economists on how weak Singapore's growth was, and how long the central bank plans to stand pat as growth picks up. They expect the next move to be a tightening.

On Thursday, MAS released its half-yearly macroeconomic review that gave more details on its April statement. It said that trade-related sectors have benefited from an improving global economy, but domestic-oriented sectors such as retail and construction languished. 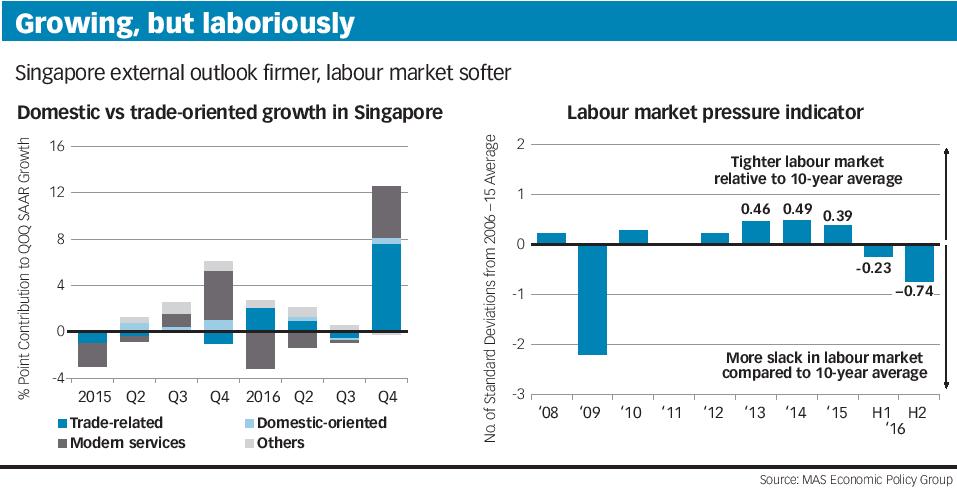 Thursday's review now has got economists agreeing that the case for an "extended period" of a neutral stance has weakened between October 2016 and April this year.

What's left now, they say, is how the labour market will fare, and how broad-based growth pickup can be.

Said Chua Hak Bin of Maybank Kim Eng, arguably one of the more bullish economists: "We think growth has recovered to a more healthy pace ... We think the MAS mention of the 'extended period' (in April) was in reference to the statement last October, and not a resetting of the clock."

Added Dennis Tan, Singapore macro-strategist at Barclays: "We believe that the MAS would need to see a more broad-based recovery in economy, both externally and domestically, as well as a pickup in hiring activity before feeling more confident about changing policy."

In Thursday's review, MAS said that Singapore's employment outlook for this year will be similar to last year's as the labour market softens.

Though wages crept up by 3.7 per cent in 2016, net employment growth is expected to stay "modest and uneven across sectors", as economic growth was bumpy across the board.

In fact, the worst may be yet to come for the labour market: unemployment rates are expected to rise this year.

Advanced estimates for Singapore's labour market in the first three months of 2017 will be released by the Manpower Ministry today.

At the same time, firms will be reluctant to pass on rising business costs on to consumers.

All these will put a dampener on inflation - a key monetary policy consideration for MAS.

"Labour market is a lagging indicator; what we see now may be a reflection of the slow growth in the past quarters," he said. "Until when the labour market strengthens enough to extert upward pressure on prices can we say that growth is broad-based. Only then will MAS consider to move again."

"The neutral stance is also a function of having an accomodative stance for economic restructuring, which can help the labour market," he said.

As it stands, Singapore's economic growth seems to be picking up as its trade partners are seeing stronger growth.

MAS said that domestic demand was strengthening in the US, the eurozone, and Japan. For China, policy stimulus and state intervention helped stabilise its growth.

Growth in Asia, excluding Japan, is thus expected to reach a stronger 4.8 per cent in 2017.

The pick-up in major global economies also stokes external demand for regional ones. Growth in the four largest Asean economies of Indonesia, Malaysia, Philippines and Thailand will reach 4.7 per cent this year, up from 4.6 per cent in 2016.

"External demand is set to make a larger contribution to overall growth and complement domestic demand" for these economies, said MAS.

But that's not to say that global growth is certain; UK's negotiations with the European Union of its withdrawal, upcoming national elections in France and Germany, and the unresolved Greek sovereign debt problem can still threaten global growth.

"Households and firms' more sanguine expectations can only be maintained if some of the prevailing uncertainties and risk factors dissipate," MAS warned.

"The sustainability of the global expansion is by no means assured."

[WASHINGTON] Janet Yellen told lawmakers Tuesday that help for the unemployed and small businesses would provide...

[GENEVA] China on Tuesday defended its early actions taken to fight the Covid-19 outbreak, saying that it...

[DETRIOT] General Motors and Microsoft are leading a US$2 billion investment round in self-driving car startup...

FedEx to cut up to 6,300 jobs in Europe on TNT integration

[MEMPHIS] FedEx is planning to cut as many as 6,300 jobs in Europe as the courier completes the process of...

US: Wall St opens higher ahead of Yellen speech, spotlight on earnings

[NEW YORK] Wall Street's main indexes rose on Tuesday after upbeat earnings from big US banks and Halliburton, while...