Singapore Budget doubles down on restructuring

It targets economic transformation as a long-term imperative, unveils Merdeka Gen Package details and tackles defence and security concerns
Janice Hengjaniceh@sph.com.sg@JaniceHengBT
Singapore is doubling down on its economic restructuring push, with Budget 2019 bringing new and extended schemes to help firms and workers - as well as tighter foreign manpower policy for the services sector.
PHOTO: REUTERS

SINGAPORE is doubling down on its economic restructuring push, with Budget 2019 bringing new and extended schemes to help firms and workers - as well as tighter foreign manpower policy for the services sector.

Economic transformation was one of the long-term imperatives flagged by Finance Minister Heng Swee Keat in his Budget speech on Monday, alongside concerns such as defence and security, and climate change.

Yet despite these notes of caution, observers saw Budget 2019 as a crowd-pleaser. OCBC Bank head of treasury research and strategy Selena Ling noted the "feel-good factor" of a Bicentennial Bonus and wide-ranging measures for firms, the elderly, and even the medium-income.

Said CBRE head of research for Singapore and South-east Asia Desmond Sim: "Overall, this Budget offers something for Singaporeans from all walks of life while keeping an eye on the longer term."

In a Facebook post, Prime Minister Lee Hsien Loong summed up Budget 2019 as "a strategic plan to build a strong and united Singapore", from investing in security and restructuring the economy to nurturing a caring society and building a global city.

Over the next three years, the government expects to spend S$4.6 billion on announced economic measures, with S$3.6 billion for helping workers, and S$1 billion for helping firms build capabilities. Said Mr Heng: "Our workforce growth is tapering, and if we do not use this narrow window to double down on restructuring, our companies will find it even harder in the future."

Calling this "the necessary medicine in the medium term", PricewaterhouseCoopers tax leader Chris Woo said it would force firms to invest further in technology, train workers, and reduce reliance on foreign labour.

Other economic moves "reinforce the government's role as a market enabler", said UOB economist Barnabas Gan. New moves to help firms grow include the Scale-Up SG programme that gives customised support to high-growth local firms, and the pilot Innovation Agents programme that provides a pool of experts to tap.

To deepen the pool of capital for local small and medium enterprises (SMEs), S$100 million will be set aside to set up the SME Co-Investment Fund III. Existing schemes will be extended, including the SME Working Capital Loan scheme and the Automation Support Package, both of which will now last till March 2021.

To encourage hiring of long-term unemployed or mature retrenched PMETs (professionals, managers, executives and technicians) and older Singaporeans respectively, the Career Support Programme will be extended to March 2021 and the Special Employment Credit, till Dec 2020. Help for the lower-income will be boosted by changes to the Workfare Income Supplement, with a higher qualifying income cap from Jan 2020 and higher maximum payouts.

Economic transformation aside, Mr Heng underlined the importance of defence, security, and diplomacy in the face of geopolitical uncertainty and threats such as terrorism and cyber-attacks. These concerns account for about 30 per cent of this year's expenditure, and the government "will invest more, if the need arises, to protect the sovereignty of Singapore and the well-being of Singaporeans".

On the social front came details of the Merdeka Generation Package for citizens born in the 1950s, including Medisave top-ups, additional outpatient subsidies, and additional Medishield Life premium subsidies. Budget 2019 sets aside S$6.1 billion for a fund that, with interest accumulated over time, will cover its full projected cost of over S$8 billion.

Separately, a new Long-Term Care Support Fund will be set up, to include S$2 billion earmarked last year and S$3.1 billion in this year's Budget.

In line with the Bicentennial commemorations, there will be a S$1.1 billion Bicentennial Bonus, including a 50 per cent personal income tax rebate subject to a cap of S$200 for the year of assessment 2019; Edusave and Post-Secondary Education Account top-ups; help for the lower-income; and a CPF top-up for some 300,000 eligible Singaporeans.

Looking to the future, Singapore must plan for climate change and rising sea levels, said Mr Heng. The government is coming up with measures for mitigating and adapting to this, which will include the need for "long-lived major infrastructure".

With the country's needs growing on this and other fronts, the government is studying the option of using government debt as part of the financing mix for long-term infrastructure projects that it takes on directly.

Borrowing is "fairer and more efficient" for large, lumpy expenditures where benefits span generations, said Mr Heng. But recurrent spending - in areas such as healthcare, preschool education and security - must not be funded via borrowing, as that "shifts the burden of paying for today's needs onto future generations".

Recurrent spending should instead be met by recurrent revenues. "Hence, we must continually review our tax system to ensure its resilience," said Mr Heng, announcing the tightening of both the goods and services tax import relief for travellers and the alcohol duty-free concession. The diesel tax of 10 Singapore cents per litre will be doubled to 20 Singapore cents per litre with immediate effect, in line with efforts to go green.

Despite speculation, there was no mention of a sugar tax or a tax on e-commerce for goods. Expecting the latter to stay on the cards, OCBC's Ms Ling suggested that such announcements might not be in line with the "popular" orientation of Budget 2019.

Neither did Mr Heng elaborate on the previously-announced Home Improvement Programme II, nor the Voluntary Early Redevelopment Scheme - though he said more would be shared in the Ministry of National Development's Committee of Supply.

As for the GST hike due sometime from 2021 to 2025, Mr Heng reiterated the promise of financial help to cushion its impact but made no new revelations, saying: "More details will be announced later." Notwithstanding the need to raise revenues, Singapore is committed to keeping the overall tax burden low, he added.

For FY2018, an overall budget surplus of S$2.1 billion or 0.4 per cent of GDP is expected, in contrast to the S$0.6 billion deficit originally forecast a year ago. This was due to the unexpected suspension of the Kuala Lumpur-Singapore High Speed Rail, and higher-than-expected stamp duty collections, said Mr Heng.

For FY2019, the government expects an overall deficit of S$3.5 billion or 0.7 per cent of GDP. With a sufficient fiscal surplus in this term of government to fund this, there will be no draw on past reserves.

DBS senior economist Irvin Seah noted an accumulated surplus of some S$14 billion to S$15 billion after accounting for FY2019, adding: "This also implies that policymakers are in a solid position to roll out counter-cyclical measures should economic conditions warrant that." 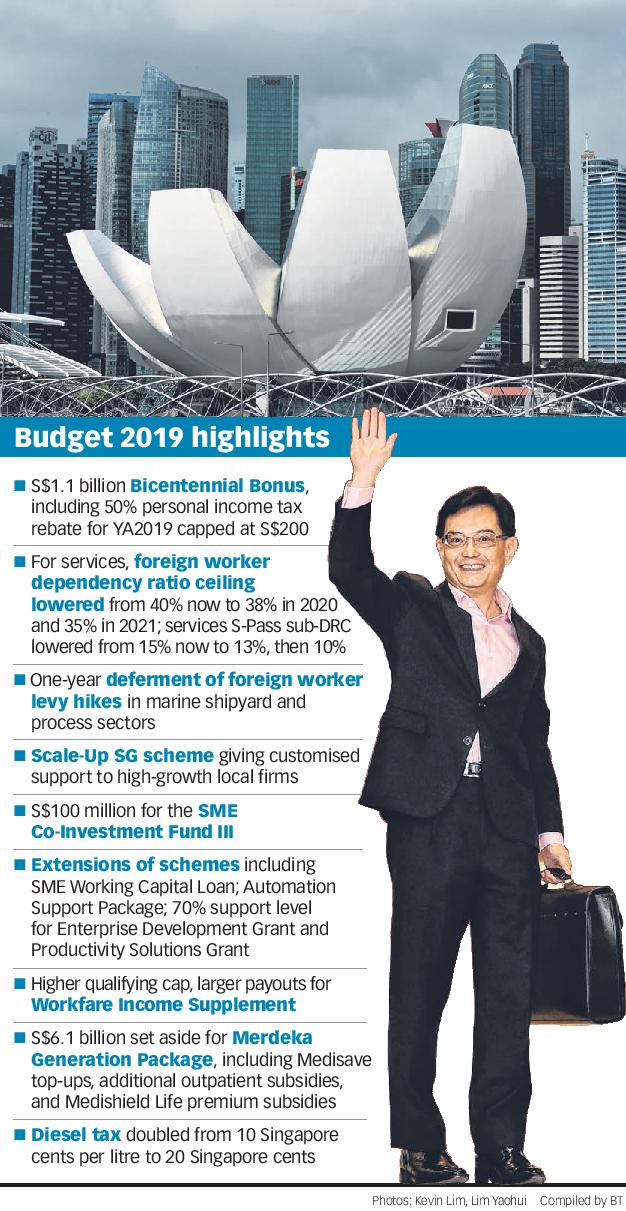 WORK permit holders from China who are already in Singapore can switch jobs without having to leave the country, in...

[NEW YORK] Ryan Springer's mystery illness began last summer with a dull ache in his chest. Over the next few days,...

THE Singapore arm of China Taiping Insurance has joined other insurers here in offering additional coverage for the...