Startups wish upon a Budget

AS THE local startup scene matures, industry players hope that this year's Budget will provide more support for talent, innovation and growing the pool of venture capitalists and angel investors.

Rhonda Wong, chief executive of proptech startup Ohmyhome, hopes for "the loosening of restrictions" in bringing foreign talent to Singapore.

The startup is now hunting for candidates skilled in data analytics and back-end tech development, but local talent is lacking and the paperwork to hire foreign talent can be onerous for startups.

She said: "While we support the government's efforts in offering fair employment policies for Singaporeans, we believe that, with the demand for niche positions that locals may not be able to fill, there should be greater flexibility in fair employment for both local and foreign talent."

Hau Koh Foo, director of the Institute of Innovation and Entrepreneurship at the Singapore Management University, said that initiatives to alleviate the tech talent crunch are sorely needed: "Increasingly, founders have had to seek out remote tech teams in Indonesia, Vietnam and India to help build their products."

He thinks that a talent co-funding scheme between the government and startups to hire senior tech professionals, such as chief technology officers, could work.

On the innovation front, startups and industry watchers are calling for more schemes to encourage research and development (R&D) and intellectual property (IP) registration. 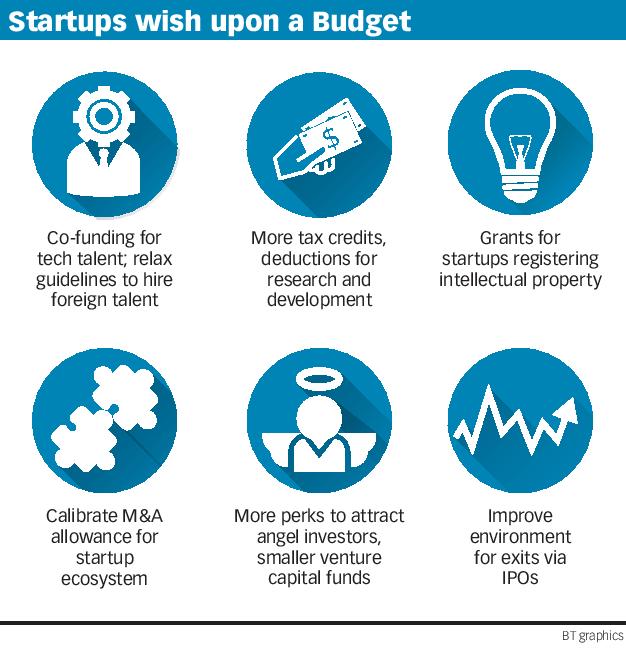 Budget 2018 already introduced several measures to boost R&D. For example, the government raised the tax deduction for qualifying expenses on eligible R&D projects in Singapore to 250 per cent.

But Sze-Hui Goh, a partner at Eversheds Harry Elias, believes that more R&D tax incentives would be a welcome relief for her startup clients. Singapore could take a leaf from New Zealand, for instance, which recently introduced a Bill proposing that tech companies receive a tax credit worth 15 per cent of their eligible R&D expenditure, which can be carried forward to later years if there is no tax to offset.

Such deductions could be tailored for startups in strategic areas, such as fintech or blockchain, added Mahesh Kumar, a partner at Withers KhattarWong.

Startups could also be awarded grants to register their intellectual property (IP) in Singapore, suggested Benjamin Cheong, partner for technology, media and telecommunications and IP at Rajah and Tann.

"There are currently no grants for the filing of IP in Singapore, which is the home base of these startups. This may result in startups deferring their IP application, or even not considering it due to cost constraints."

Under the scheme, acquiring companies may claim a percentage of the value of the acquisition or merger. The allowance is capped at S$10 million for acquisitions completed between April 2016 and March 2020.

Before April 2015, the transaction had to result in the acquirer owning at least half the target. In the 2015 Budget, this threshold was relaxed to 20 per cent, benefiting small and medium-sized enterprises.

The criteria can be revised further, suggested Mr Ong. "To incentivise VC or MNC investment into start-ups, where, typically, the stakes taken are lower and in the form of preference shares, the M&A allowance requirements should be relooked."

Others hope that Singapore can attract more early-stage VC firms. In its Budget 2019 proposal, PwC mooted a tax-exemption scheme for early-stage VC investments with assets under management (AUM) of at least S$10 million. Presently, VCs need a minimum fund size of S$50 million to qualify for the existing Section 13X incentive.

Kyle Lee, partner and co-head of the startup and VC practice at WongPartnership, agreed with the proposal, but added: "We would go further to suggest that adding a condition that, in exchange for the lower threshold, the fund should be required to invest in a minimum number of Singapore-headquartered startups in order to bolster the local ecosystem."

Mr Kumar of Withers KhattarWong is more circumspect, noting that the lower threshold "may also require a dilution of the S$200,000 per fund expenditure requirement, which may not be in the interest of preserving the quality of the fund management industry."

Damian Tan, managing director of Vickers Venture Partners, said: "An AUM of S$10 million is extremely small. There could be a step ladder rate to include a larger asset base to attract bigger funds, but with fewer exemptions as it goes up."

Separately, some reckon that angel investors deserve more blessings. PwC has called for liberalisation of the Angel Investors Tax Deduction scheme; eligibility criteria could perhaps be eased so that accredited investors can benefit as well.

At present, angel investors must sink at least S$100,000 to qualify. Christopher Quek, managing partner of VC firm TRIVE, hopes this can be lowered to S$50,000.

Beyond individual schemes, the endgame matters. One concern is how the exit environment is "restricted to M&As for VC-backed startups", said Ms Goh of Eversheds Harry Elias.

Mr Cheong of Rajah and Tann agreed, noting that homegrown technology companies such as Sea and Razer have chosen to list abroad. "The government should review the existing regulations to make it easier for startups to list - and to remain listed in Singapore," he said.

[KUALA LUMPUR] Malaysia's Supermax has proposed listing on the Singapore Exchange (SGX) to expand its shareholder...

TERASEA, a joint venture in which offshore and marine group Ezion Holdings has a 50 per cent interest, was placed...

[SANTA CLARA] Advanced Micro Devices agreed to buy Xilinx for US$35 billion in stock, taking the chipmaker into more...