EVEN as Budget 2020 sets aside S$5.6 billion to help firms, workers, and households amid the Covid-19 outbreak, it retains a focus on the future, from economic transformation to climate change, said Deputy Prime Minister and Finance Minister Heng Swee Keat on Tuesday.

With bumper amounts such a S$6 billion support package for the upcoming goods and services tax (GST) hike, and S$5 billion to tackle rising sea levels, FY2020's estimated overall deficit of S$10.9 billion is the largest since 2009.

But thanks to continued prudence, there is no need to draw on past reserves, said Mr Heng.

As Prime Minister Lee Hsien Loong noted in a Facebook post, Budget 2020 is able to provide "critical support" in dealing with Covid-19 because of such prudence. "Together, we have put aside enough to cope with a rainy day like this," he wrote.

Even as support is provided, Singapore "must continue to steward our resources and strengths, so that we are ready to grow again when the outbreak ends", added Mr Lee.

After weak growth in 2019, the expected recovery this year has been derailed by the Covid-19 outbreak - with its duration, severity, and global economic impact still unclear.

While the official baseline projection is for 0.5 per cent growth this year, "we must be prepared that the economic impact may be worse than we projected", said Mr Heng.

The budget includes S$800 million to aid frontline agencies in fighting the outbreak. To help firms retain workers and ride out the crisis, there will be a S$4 billion Stabilisation and Support Package.

Economy-wide moves include a S$1.3 billion Jobs Support Scheme of 8 per cent wage offsets for local workers, and a 25 per cent corporate income tax rebate.

For households, there will be a S$1.6 billion Care and Support Package including a one-time cash payout of S$100 to S$300 for all Singaporeans aged 21 and older, depending on their incomes. 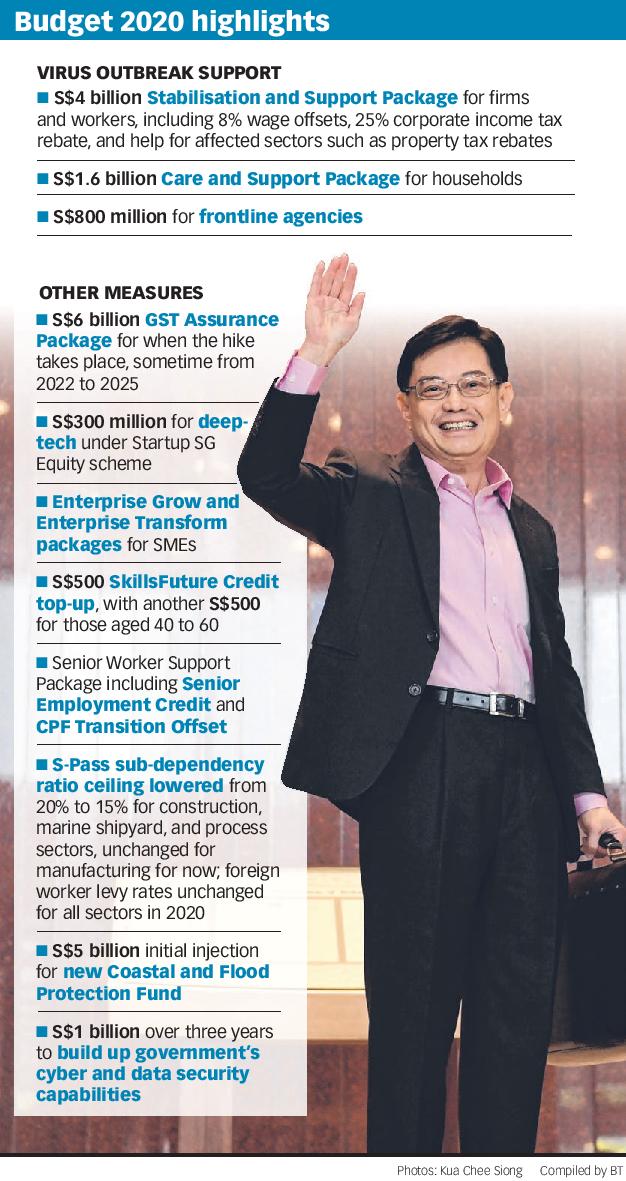 Although "the generosity of the various packages is a pleasant surprise", fine-tuning or augmentation can be expected depending on how the outbreak plays out, said NUS Business School associate professor Lawrence Loh.

Given the uncertainty about Covid-19, off-Budget measures would be unsurprising if current measures are later deemed insufficient, agreed CBRE head of research for Singapore and South-east Asia Desmond Sim.

So while the GST hike will not be in 2021, it "will still be needed by 2025". The Budget sets aside S$6 billion for an Assurance Package that will accompany the eventual hike.

Beyond short-term support, the Budget is a strategic financial plan for the future, said Mr Heng, reiterating some observations of major structural shifts: declining support for globalisation, the economic rise of Asia, technological advancement, and an ageing society. Transformation must continue, even as restructuring begins to bear fruit, he added.

In the last three years, productivity - real value-added per hour worked - rose 2.6 per cent each year, faster than the 2.2 per cent rate in the preceding three years.

Citizens' real median income rose 3.7 per cent each year, improving from 3.2 per cent.

As for the next three years, S$8.3 billion has been allocated for transformation and growth, including as part of earlier-announced schemes.

One aspect of this is building partnerships. Trade associations and chambers will get funding to hire experienced professionals, while merchants' associations will get support in rejuvenating their precincts.

Another aspect is deepening capabilities, with S$300 million to catalyse investment in deep-tech startups, and help for small and medium enterprises to go digital, go abroad, develop leaders, and transform.

A third aspect of transformation is the workforce. The SkillsFuture movement is entering its "next bound" with SkillsFuture Credit top-ups, a new enterprise credit for firms, and a mid-career support package.

While supporting locals, foreign worker policy must be managed.

This will also be done for the manufacturing sector - just not yet, given economic uncertainties, said Mr Heng.

Foreign worker levy rates will also stay unchanged for all sectors this year, with earlier-announced increases to be deferred to 2021.

But the lack of actual levy reductions, coupled with S-Pass tightening, shows that "despite the virus outbreak, the government is determined to reduce our foreign worker dependency," said CIMB Private Banking economist Song Seng Wun.

A Senior Worker Support Package will encourage hiring of older workers, and offset half the rise in Central Provident Fund employer contributions in 2021.

The Basic Retirement Sum will be raised for cohorts turning 55 in 2021 and 2022, while the lower-income will enjoy a Matched Retirement Savings Scheme and changes to the Silver Support Scheme.

This is alongside social measures such as an Enabling Employment Credit for persons with disabilities.

To tackle climate change, the Budget includes an initial injection of S$5 billion to a new Coastal and Flood Protection Fund, and incentives to adopt electric vehicles, as Singapore aims to phase out internal combustion engine vehicles by 2040.

To boost national cybersecurity, S$1 billion will be set aside over three years to build up the government's cyber and data security capabilities.

And for fiscal sustainability, Singapore must continue to plan based on "long-term structural drivers", and not count on revenue surprises.

The basic deficit, which excludes top-ups to funds and the Net Investment Returns Contribution from invested reserves, was S$5.1 billion or 1 per cent of GDP.

But Mr Heng noted: "With our fiscal prudence since the beginning of this term of government, we have sufficient accumulated fiscal surplus to fund the overall deficit in FY2020."